Comments (0)
Add to wishlist Delete from wishlist
Cite this document
Summary
The essay talks about the differences between microeconomics and macroeconomics, as fields of economics. The interrelationship between the two fields are also considered. Microeconomics can be recognized as price theory, whereas macroeconomics can be called as theory of income and employment…
Download full paper File format: .doc, available for editing
HIDE THIS PAPERGRAB THE BEST PAPER97.2% of users find it useful 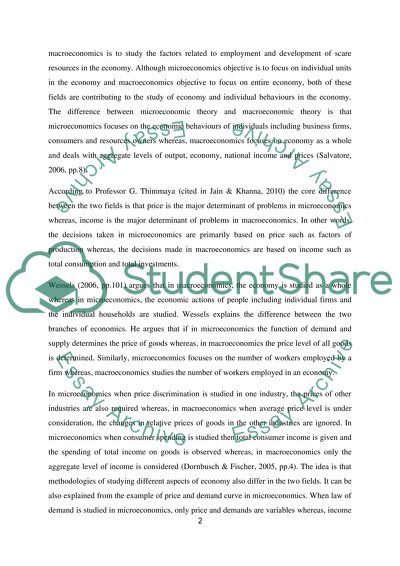 Extract of sample "The differences between macroeconomics and microeconomics"

CHECK THESE SAMPLES OF The differences between macroeconomics and microeconomics

It also has many warehouses to deliver chilled and frozen food to customers. It is highly unpleasant for the workers to work in the chilled warehouses. Just five years ago, one of the warehouses in Stroke-on-Trent introduced a new technical system that transformed the attitude of the workers and their efficiency.
Though the company spent almost £ 300,000 on installing a new system, it reckoned that by cutting down the mistakes and providing a better workplace for workers it could save that much amount in the first year itself. Prior to the installation of a new communication system, workers felt much boring with the old techniques of writing the movements of goods by a bit of paper and pencils. Apart from mistakes and e...
6 Pages (1500 words) Research Paper

The term clinical governance gained importance following the high mortality rate for pediatric cardiac surgery at the Bristol Royal Infirmary. The incident led to the formation by the government in 1998 of the Kennedy Commission, which proved a turning point in overhauling the NHS (Kennedy, 2001). The commission’s final report recommended that change “can only be brought about with the willing...
11 Pages (2750 words) Term Paper

While microeconomics is concerned with the factors underpinning the economic life of individual entities like families and small businesses, macroeconomics looks into the various elements that move or determine the economy in its entirety or what some call an aggregate economy. Macroeconomics is useful because it allows a predictive view of how market forces affect the economy and advises governments appropriate economic policies and gives private individuals and business entities a glimpse of what the future holds economically.
The term macroeconomics did not exist prior to the Great Depression but there was a collective set of theories that were used to study the various workings that influenced the aggregate economy. Econo...
8 Pages (2000 words) Assignment
sponsored ads
Save Your Time for More Important Things
Let us write or edit the essay on your topic "The differences between macroeconomics and microeconomics" with a personal 20% discount.
GRAB THE BEST PAPER

Let us find you another Essay on topic The differences between macroeconomics and microeconomics for FREE!