Comments (0)
Add to wishlistDelete from wishlist
Cite this document
Summary
In the following paper “Macroeconomics: Paradox of Thrift” the author looks at thrift as an integral part of this arrangement which calls for sensible and cautious management of money and goods so that wastage is minimized while maximizing the value…
Download full paperFile format: .doc, available for editing
HIDE THIS PAPERGRAB THE BEST PAPER95.4% of users find it useful 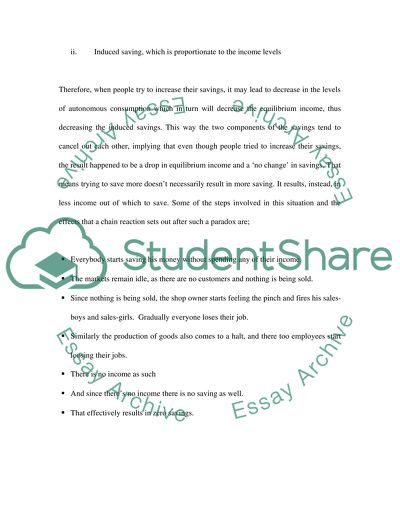 Download file to see previous pages If everybody in the population starts saving the money, then ideally that should result in overall higher levels of savings. But John Maynard Keynes, the famous economist, studied this very aspect of thrift and pointed out an interesting paradox. Keynes inferred that if everyone starts saving during times of recession then that would result in falling of the aggregate demand, which in turn will result in lowering the value of total savings in the population and leads to fall in economic growth. He meant to say that thrift is virtuous only up to a limit. The paradox is that an increase in saving, which is a recommended microeconomic strategy when individuals encounter problems, is not the best macroeconomic course of action for the aggregate economy1.
Therefore, when people try to increase their savings, it may lead to a decrease in the levels of autonomous consumption which in turn will decrease the equilibrium income, thus decreasing the induced savings. This way the two components of the savings tend to cancel out each other, implying that even though people tried to increase their savings, the result happened to be a drop in equilibrium income and a 'no change' in savings. That means trying to save more doesn't necessarily result in more saving. It results, instead, in less income out of which to save. Some of the steps involved in this situation and the effects that a chain reaction sets out after such a paradox are;
Everybody starts saving his money without spending any of their income.
The markets remain idle, as there are no customers and nothing is being sold.
Since nothing is being sold, the shop owner starts feeling the pinch and fires his sales-boys and sales-girls. Gradually everyone loses their job.
Similarly, the production of goods also comes to a halt, and there too employees start losing their jobs.
There is no income as such
And since there's no income there is no saving as well.
That effectively results in zero savings.
This is what John Maynard Keynes studied and objected to. This can further be demonstrated with the help of the Injections-Leakages Model diagrams.
The two figures shown here depict the paradox of thrift in a convincing manner. For example, if to start with the saving line indicated by 'S' has a positive slope showing gradual increase in savings from a negative saving figure (i.e. expenditure) to a positive saving figure, then the equilibrium of production is achieved by a production of $12 trillion i.e. at the intersection of S and I. Now, anticipating an impending recession, the community (or group of consumers) start increasing their levels of saving i.e. they are now little more on the thrifty side, by curtailing their expenditure plans. Therefore, the community is able to save an amount of $1 trillion more (see fig-2). The saving line is shifted upward and so the point of equilibrium is also shifted. The new saving line intersects the original investment line at $8 trillion of aggregate production. This new equilibrium is, therefore, $4 trillion less than the original equilibrium.  ...Download file to see next pagesRead More
Share:
Tags
Cite this document
(Macroeconomics: Paradox of Thrift Assignment Example | Topics and Well Written Essays - 1502 words, n.d.)
Macroeconomics: Paradox of Thrift Assignment Example | Topics and Well Written Essays - 1502 words. Retrieved from https://studentshare.org/macro-microeconomics/1525538-macroeconomics-the-financial-elements

CHECK THESE SAMPLES OF Macroeconomics: Paradox of Thrift

...? Macroeconomics The article selected for the project is “Do Tax Cuts Leads to Economic Growth” (Leonhardt, . The article is focused on the US economy and described about the impacts of tax cuts on the economic growth. The article is written in technical language of economics and it seems that the author has conducted an in depth analysis on the US Economy. Following is the evaluation of the article. 1. Principles of Economics & US Tax Cuts The article has beautifully covered the different economic indicators along with their projected movements on the basis of the proposed strategy by the current Govt. The author has identified, as well as, analyzed the impact of tax cuts by taking into consideration of the different...
10 Pages(2500 words)Essay

Choose a country, which underwent a recession, and where fiscal and monetary policies were used to overcome the recession

...Depression of the 1930s which included the UK, the famous economist Keynes debunked this concept and contended that negative output over a period will not necessarily clear out on its own as was regarded by the notion of the self-correcting aspect of a free economy. He cited that there are four reasons for this; first, “Firms should cut wages to reflect lower prices but in reality workers are very resistant to cuts in nominal wages,” second, “2. If wages were cut in response to unemployment workers would have less spending power therefore AD would continue to fall,” and third, “In a recession people have low confidence and therefore spend less. Keynes said this was the “Paradox of Thrift” (EconomicsHelp,...
4 Pages(1000 words)Essay

...? Macroeconomics Macroeconomic factors such as unemployment rate and inflation play a pivotal role in the national economy of the country. Rapid inflation takes away the benefit of rising GDP or in other words brings down the real GDP growth rate and thereby real income of the people. Similarly, high unemployment rate does not augur well for the economy as it tends to raise the income disparity among the people. The paper attempts to explore how unemployment and inflation can be tamed through policy matters. The US has experienced high unemployment and high inflation rates in the past. Both are equally bad for the national economy. Current GDP, Inflation and Unemployment Rate The US GDP in year 2012 is...
4 Pages(1000 words)Essay

...12 December Understanding Thrift Savings Plan Apart from the Social Security and other saving plans, the Thrift SavingsPlan is one of the greatest saving plans of the United States government. The Thrift Savings Plan is an investment plan for federal workers including the members of the uniformed service such as, the Public Health Services, the Coast Guard, and the National Guard. The plan is equally the same as the 401 (k) plan, offered in the private sector whereby, employees make a contribution as an investment plan. These funds therefore are the property of employees. An employee contributes at will, which means they can elect not to take part in the Thrift Savings...
8 Pages(2000 words)Research Paper

The Paradox of Thrift

... permanent recession, with ongoing unemployment. That is the essence of macro demand-side expansionary policy. In the Keynesian framework there is a paradox of thrift-an increase in saving can lead to a decrease in expenditures, decreasing output and causing a recession. [1] [11] [13] Works Cited 1. "Aggregate Demand, Aggregate Supply, and Modern Macroeconomics" [Internet], Available at
7 Pages(1750 words)Essay

The Paradox of Thrift

...Paradox of Thrift Affiliation: Economic variables that account for aggregate demand and supply influence the growth and development of an economy in myriad ways. Consumption and saving are two critical economic aspects that highly influence the extent, magnitude, and direction of economic growth and development. Individuals save for different motives, among them to finance their future spending or for investment purposes. When individuals and households collectively increase their savings in an economy, the economy is highly likely to plunge into economic hardships; a scenario referred to as paradox of thrift (Yates & Hunter, 2011). This scenario contradicts the...
1 Pages(250 words)Assignment

...﻿Godel’s Paradox Q.6 Godel’s paradox is a theory that demonstrates the error in verifying or proving statements in a mathematical way. As observed by Godel “I am lying.” (Jean 595). This statement does not have proof, making it impractical to establish if the statement is true or false and thus, it is not unarguable. He is to the opinion that his statement is right and at the same time cannot be proven true or false because it would lead to a contradiction for both reasons. He acknowledged the whole arithmetic story can be encoded in the arithmetic itself (George 388). His two theorems of incompleteness show mathematical logic that ascertains intrinsic limitations of minor axiomatic systems able to solve arithmetic problems. He... Paradox...
7 Pages(1750 words)Coursework
sponsored ads
Save Your Time for More Important Things
Let us write or edit the assignment on your topic "Macroeconomics: Paradox of Thrift" with a personal 20% discount.
GRAB THE BEST PAPER

Let us find you another Assignment on topic Macroeconomics: Paradox of Thrift for FREE!