Comments (0)
Add to wishlistDelete from wishlist
Cite this document
Summary
The prime purpose of the paper "Impact Of Demand For Company Product" discusses the combination of increase with the national income and the flexibility that can help Dairyland to have more supplies while factoring in a growth for demand for basic products…
Download full paperFile format: .doc, available for editing
HIDE THIS PAPERGRAB THE BEST PAPER98.9% of users find it useful 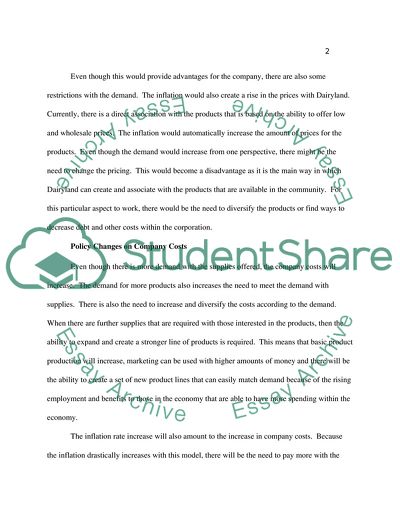 Extract of sample "Impact Of Demand For Company Product"

Download file to see previous pages The ability for economic growth and a decline in employment would provide more individuals and households that wouldn’t be as limited in buying specific products. There would be the ability to invest in different types of products while looking at other needs which can be added to daily living. More important, there is the ability to create a different amount of spending with the more that individuals are employed and able to work with the product. The combination of increase with the national income as well as the flexibility which most would have for providing new options in products would help Dairyland to have more supplies while factoring in a growth for demand for basic products as well as items that are known within the corporation but not as popular.
Even though this would provide advantages for the company, there are also some restrictions on the demand. The inflation would also create a rise in the prices with Dairyland. Currently, there is a direct association with the products that are based on the ability to offer low and wholesale prices. The inflation would automatically increase the number of prices for the products. Even though the demand would increase from one perspective, there might be the need to change the pricing. This would become a disadvantage as it is the main way in which Dairyland can create and associate with the products that are available in the community. For this particular aspect to work, there would be the need to diversify the products or find ways to decrease debt and other costs within the corporation.
Even though there is more demand for the supplies offered, the company costs will increase. The demand for more products also increases the need to meet the demand for supplies. There is also the need to increase and diversify the costs according to the demand. ...Download file to see next pagesRead More
Share:
Tags
Cite this document
(“Impact Of Demand For Company Product Essay Example | Topics and Well Written Essays - 2500 words - 1”, n.d.)
Retrieved from https://studentshare.org/macro-microeconomics/1408941-carry-out-a-swot-analysis-for-the-firm-based-on-these-policy-changes-and-the-future-prospects-of-the-company-case-study-1-dairyland-firm-it-is-based-on-case-studies-page-httpwwwbizedcoukvirtualeconomystudiesbusinessfirmshtm

CHECK THESE SAMPLES OF Impact Of Demand For Company Product

Ever since the horrific attacks of 911, the airline industry has been going through a bad phase. The attacks on the World Trade Center have had a devastating effect on the commercial sector and the airline industry in particular. When one considers the fact that the instrument of destruction of these attacks was hijacked airplanes, there is understandable concern about traveling in them and thus the public lost faith in the airline industry immediately following September 11th.  For many airline companies, this meant going into severe debt or even declaring bankruptcy. Even after some time, the majority of the airline industry experienced lower profits and massive downsizing. However, for smaller companies like Sou...
8 Pages(2000 words)Case Study
sponsored ads
Save Your Time for More Important Things
Let us write or edit the essay on your topic "Impact Of Demand For Company Product" with a personal 20% discount.
GRAB THE BEST PAPER

Let us find you another Essay on topic Impact Of Demand For Company Product for FREE!