Healthcare in the US - Essay Example

Comments (0)
Add to wishlist Delete from wishlist
Cite this document
Summary
Healthcare in the US Statistics on healthcare expenditure in the United States indicate a consistent pattern of exponential increase over the past four decades. Between 1970 and 2010, the United States experienced a rise in expenditure from 7.2% to 17.9 % of the Gross Domestic Product (The Henry J…
Download full paper File format: .doc, available for editing
HIDE THIS PAPERGRAB THE BEST PAPER94% of users find it useful 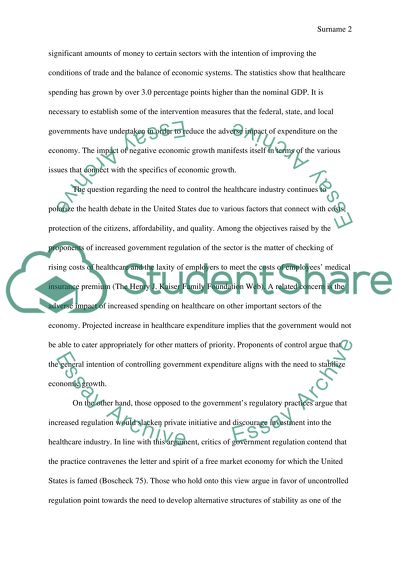 Extract of sample "Healthcare in the US"

Download file to see previous pages Policy issues, adverse economic conditions, and other trends and practices have been cited as some of the fundamental causes of the rise in healthcare costs both in the state, federal, and local governments. The sharp increases in healthcare expenditure have had various negative consequences to other sectors of the economy and the average livelihood of the American citizens. Financial pressure on families, challenges on the part of the employers, and a reduction in spending on other important sectors of the economy are some of the negative consequences of increased healthcare spending. Recent figures show that the rate of healthcare spending is significantly higher than average economic growth. The implication, according to economists, is that the rate of spending on healthcare is much faster than the rate of economic activities in other sectors of the economy. The imbalance in economic activities and healthcare expenditure shows that the levels may not be sustainable in the end (The Henry J. Kaiser Family Foundation Web). Usually, economic activities are determined by the manner in which countries devote significant amounts of money to certain sectors with the intention of improving the conditions of trade and the balance of economic systems. The statistics show that healthcare spending has grown by over 3.0 percentage points higher than the nominal GDP. It is necessary to establish some of the intervention measures that the federal, state, and local governments have undertaken in order to reduce the adverse impact of expenditure on the economy. The impact of negative economic growth manifests itself in terms of the various issues that connect with the specifics of economic growth. The question regarding the need to control the healthcare industry continues to polarize the health debate in the United States due to various factors that connect with costs, protection of the citizens, affordability, and quality. Among the objectives raised by the proponents of increased government regulation of the sector is the matter of checking of rising costs of healthcare and the laxity of employers to meet the costs of employees’ medical insurance premium (The Henry J. Kaiser Family Foundation Web). A related concern is the adverse impact of increased spending on healthcare on other important sectors of the economy. Projected increase in healthcare expenditure implies that the government would not be able to cater appropriately for other matters of priority. Proponents of control argue that the general intention of controlling government expenditure aligns with the need to stabilize economic growth. On the other hand, those opposed to the government’s regulatory practices argue that increased regulation would slacken private initiative and discourage investment into the healthcare industry. In line with this argument, critics of government regulation contend that the practice contravenes the letter and spirit of a free market economy for which the United States is famed (Boscheck 75). Those who hold onto this view argue in favor of uncontrolled regulation point towards the need to develop alternative structures of stability as one of the ways through which stability of the healthcare industry and other related aspects of the economy can be controlled. The common impression in the perspectives of critics who challenge the free market healthcare model is that the system has failed. Exorbitant costs of healthca ...Download file to see next pages Read More
Share:
Tags
Cite this document
(“Healthcare in the US Essay Example | Topics and Well Written Essays - 3000 words”, n.d.)
Healthcare in the US Essay Example | Topics and Well Written Essays - 3000 words. Retrieved from https://studentshare.org/macro-microeconomics/1403819-healthcare-in-the-us

“Healthcare in the US Essay Example | Topics and Well Written Essays - 3000 Words”, n.d. https://studentshare.org/macro-microeconomics/1403819-healthcare-in-the-us.
Comments (0)
Click to create a comment or rate a document

CHECK THESE SAMPLES OF Healthcare in the US

A healthy person is not difficult to define. He or she is a person who does his chores regularly...
10 Pages (2500 words) Term Paper

These contribute to several challenges faced by the IC today1.
For example, the Japanese fleet’s attack on Pearl Harbor, which was a surprise attack and the subsequent entrance of America into the Second World War, illustrated the need to re-engineer the outdated policies and organization of the IC. The changes made by the U.S. in the IC, which occasioned from World War II are still palpable today2. Some changes were later made when the Senate Committees came together with the aim of investigating the Central Intelligence Agency (CIA), National Security Agency (NSA), Federal Bureau of Investigation (FBI), and Internal Revenue Service (IRS) to evaluate the possible abuses of power that transpired in the preceding years.<...
9 Pages (2250 words) Assignment

Unfortunately the United States into a new debt in the Second World War. In 1941, the gross domestic product was 45 percent; it rose up to 119 percent in 1946 probably at the end of t...
6 Pages (1500 words) Assignment
sponsored ads
Save Your Time for More Important Things
Let us write or edit the essay on your topic "Healthcare in the US" with a personal 20% discount.
GRAB THE BEST PAPER

Let us find you another Essay on topic Healthcare in the US for FREE!