Comments (0)
Add to wishlistDelete from wishlist
Cite this document
Summary
This essay discusses PepsiCo internal and external analysis. The corporation’s bottling and distribution of beverage are done by the company and licensed bottlers all over the world. Also, it analyses products and geographical markets. The essay considers the political, economic, technological environment…
Download full paperFile format: .doc, available for editing
HIDE THIS PAPERGRAB THE BEST PAPER91.5% of users find it useful 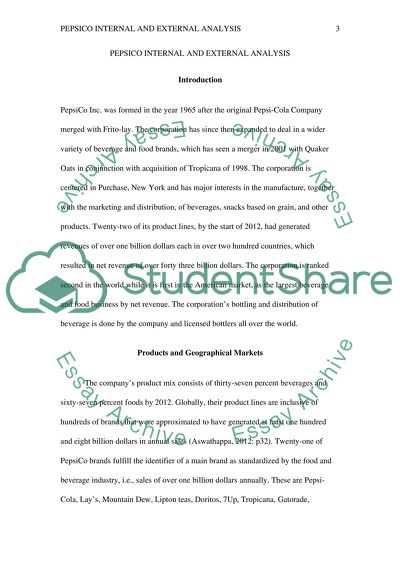 Download file to see previous pages PepsiCo Inc. was formed in the year 1965 after the original Pepsi-Cola Company merged with Frito-lay. The corporation has since then expanded to deal in a wider variety of beverage and food brands, which has seen a merger in 2001 with Quaker Oats in conjunction with acquisition of Tropicana of 1998. The corporation is centered in Purchase, New York and has major interests in the manufacture, together with the marketing and distribution, of beverages, snacks based on grain, and other products. Twenty-two of its product lines, by the start of 2012, had generated revenues of over one billion dollars each in over two hundred countries, which resulted in net revenue of over forty three billion dollars. The corporation is ranked second in the world while it is first in the American market, as the largest beverage and food business by net revenue.
product lines are inclusive of hundreds of brands that were approximated to have generated at least one hundred and eight billion dollars in annual sales (Aswathappa, 2012: p32). Twenty-one of PepsiCo brands fulfill the identifier of a main brand as standardized by the food and beverage industry, i.e., sales of over one billion dollars annually. These are Pepsi-Cola, Lay’s, Mountain Dew, Lipton teas, Doritos, 7Up, Tropicana, Gatorade, Aquafina, Ruffles, Mirinda, Cheetos, Quaker Foods, Walkers, Fritos, Sierra Mist, Tostitos, and Pepsi Max. The company’s worldwide operations have shifted over time resulting from global expansion. This saw the corporation separated in 2010 into four divisions: PepsiCo Africa, Middle East, and Asia, PepsiCo Europe, PepsiCo Americas Beverages, PepsiCo Americas Foods (Blythe, 2009: p41). PepsiCo employs approximately 285,000 employees across the world as by counts in 2010. PepsiCo Americas Foods is operational in North and South America and is segmented into Latin America Foods in Central and South America, Gamesa and Sabritas in Mexico, Quaker Foods and Snacks in North America, as well as Frito-Lay and PepsiCo Americas Foods in North America. PepsiCo Americas Beverages manufactures or licenses non-carbonated and carbonated drinks in South, Central, and North America. PepsiCo Europe makes up sixteen percent of PepsiCo’s net revenue and manufactures beverages and foods in Europe, as well as expanding into Russia in the year 2009 (Cherunilam, 2010: p50). PepsiCo Africa, Middle East, and Asia cover these regions and prefer to go about production by affiliate operations, joint ventures, contract manufacturing, and licensing, although it still owns some facilities for manufacturing and distribution in these regions. ...Download file to see next pagesRead More
Share:
Tags
Cite this document
(“PepsiCo internal and external analysis Essay Example | Topics and Well Written Essays - 2500 words”, n.d.)
Retrieved de https://studentshare.org/macro-microeconomics/1403089-pepsi

CHECK THESE SAMPLES OF PepsiCo Internal and External Analysis

The role of CFD in this contemporary technological world is crucial. It assists in the path of the global world of Computer Assisted Engineering or CAE that refers to the ensemble of simulation tools that support the work of engineers between the initial design phase and the final definition of the manufacturing process. The industrial production process uses various software tools for computerization of the whole production cycle. Among those tools, the most important is Computer-Assisted...
6 Pages(1500 words)Report

In th...
8 Pages(2000 words)Case Study
sponsored ads
Save Your Time for More Important Things
Let us write or edit the essay on your topic "PepsiCo Internal and External Analysis" with a personal 20% discount.
GRAB THE BEST PAPER

Let us find you another Essay on topic PepsiCo Internal and External Analysis for FREE!