Comments (0)
Add to wishlist Delete from wishlist
Cite this document
Summary
This thesis will look at the overall status of the Customs Union created by three countries in 2010: Russia, Kazakhstan and with Belarus, which joined later in that year. …
Download full paper File format: .doc, available for editing
HIDE THIS PAPERGRAB THE BEST PAPER94.1% of users find it useful 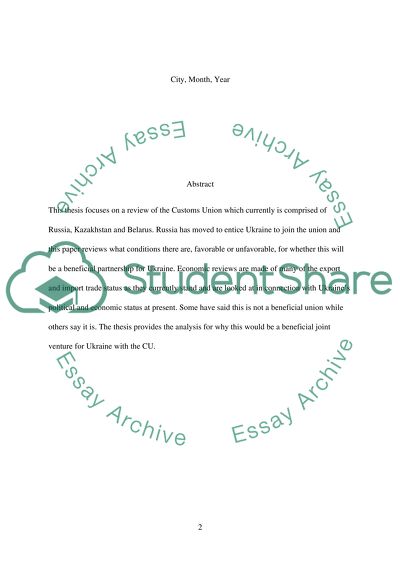 Download file to see previous pages 1 Overview Statistics of Ukraine Economic Status p. 19 Fig. 2 Real Sector Performance of Ukraine p. 20 Fig. 3 State Budget Execution p. 21 Fig. 4 main State Budget Indicators for 2012-2013 p. 21 Fig. 5 Map of the Commonwealth of Independent States p. 22 Fig. 6 A Look at the Economic Picture for the CU in 2010-2011 p. 25 Fig. 7 EEU Timeline Implementation Infrastructure p. 29 Fig. 8 Nominal GDP of BRK Countries and Ukraine, 2000-2011 p. 32 Fig. 9 Structure of Gross Value Added in BRK and Ukraine, 2005 and 2010 p. 33 Fig 10 Structure of Industry by Branch in BRK and Ukraine, 2005 and 2010 p. 34 Fig. 11 Belarus Foreign Trade by Country Groupings p. 35 Fig. 12 Russia Foreign Trade by Country Groupings p.37 Fig. 13 Kazakhstan Foreign Trade by Country Groupings p. 39 Fig. 14 Ukraine Foreign Trade by Country Groupings p. 40 Fig. 15 Kazakhstan Foreign Trade Developments p.41 Fig. 16 Russia Foreign Trade Developments p.42 Fig. 17 Belarus Foreign Trade Developments p.43 Fig. 18 Ukraine Foreign Trade Developments p.44 Fig. 19 Service Imports p. 45 Fig. 20 Service Exports p. 46 Fig. 21 Belarus Export/Import Charts p. 47 Fig. 22 Kazakhstan Export/Import Charts p. 47 Fig. 23 Russia Export/Import Charts p. 48 Fig. 24 Common External Tariff of the BRK Customs Union p.50 Fig. 25 Gas Production Forecast Table 2005-2016 p. 52 Fig. 26 Gas Production Forecast Table 2014-2021 p. 53 Fig. 27 Major LNG Fields and Pipeline Network p. 54 Fig. 28 Global Competitiveness Index (GCI) Rankings p.55 Fig. 29 Mutualism in Europe: The Diverse Realities of the EU p. 57 Fig. 30 Common Principles of European Mutual Societies p.58 Fig. 31 Import Tariffs Before and After the Customs Union Creation p. 51 Fig.32.Global Financial...
The purpose for this paper is to look at the surrounding circumstances of the Ukraine, what state the economy is in, what Ukraine’s main resources are, and how export and import situations would benefit if Ukraine were to join the Customs Union. In one section, three examples of Ukraine’s position in the marketplace will be examined with a projected analysis gleaned from literature review research as to whether joining the Union on a limited basis would be better or whether joining as a full member would be best, and finally, how Ukraine would manage by not joining at all.
Consequently, this analysis would present a picture in time, based on certain circumstances only. War and natural disasters can strongly disrupt any strategic plans, no matter how carefully set up. Notwithstanding unexpected occurrences, perhaps other Unions may decide to relax some of their rules in order to bring Ukraine in to membership. For now, the European Union, while once a possibility, seems to be sidelined by Ukraine’s current political environment.
The research motivation is to compare the various literature reviews by expert economists and scholars of scenarios and resulting factors of Ukraine joining the CU under various structures of membership. In that capacity, literature review is necessary for finding the picture currently available for the Ukraine and for the Customs Union through economic trends over the last few years and to bring that forward into the comparative analysis.
The question in this thesis is to ‘determine how the Ukraine will fare economically if it does join the Common Union currently consisting of Russia, Kazakhstan and Belarus.’
...Download file to see next pages Read More
Share:
Tags
Cite this document
(“The economic consequences for Ukraine in joining the Thesis”, n.d.)
Retrieved from https://studentshare.org/macro-microeconomics/1402791-economic-consequences-of-the-russia-belarus

(The Economic Consequences for Ukraine in Joining the Thesis)
https://studentshare.org/macro-microeconomics/1402791-economic-consequences-of-the-russia-belarus.

“The Economic Consequences for Ukraine in Joining the Thesis”, n.d. https://studentshare.org/macro-microeconomics/1402791-economic-consequences-of-the-russia-belarus.
Comments (0)
Click to create a comment or rate a document

The storms may be dust or the sand, hail and the thunder but they cause destruction and result in a total shutdown of business due to damage to the buildings.
Torrential rainfall can also add to an economic crisis and huge losses for rain also affects the buildings especially the acid rain (Wallace, Alfred Russel, 1889). This type of rain is corrosive in nature which results in deteriorating structures and a lot of costs are required for the maintenance (J. S. 0guntoyinbo and F. 0. Akintola, 1983). The acid rainfall causes the structure to degrade which results in increased requirements not only of cost but also increased manpower. Nowadays, we see such problems occur in places where the countries are very industrialize...
7 Pages (1750 words) Case Study
sponsored ads
Save Your Time for More Important Things
Let us write or edit the thesis on your topic "The economic consequences for Ukraine in joining the Russia-Belarus-Kazakhstan customs union" with a personal 20% discount.
GRAB THE BEST PAPER

Let us find you another Thesis on topic The economic consequences for Ukraine in joining the Russia-Belarus-Kazakhstan customs union for FREE!