Comments (0)
Add to wishlistDelete from wishlist
Cite this document
Summary
This study analyses the Hungarian financial crisis in the year 2008. The study discusses the short-term forecast of growth of Hungary according to the IMF. Also, the study considers the impact of the financial crisis on Hungary and reasons for Hungarian weakness…
Download full paperFile format: .doc, available for editing
HIDE THIS PAPERGRAB THE BEST PAPER98.5% of users find it useful 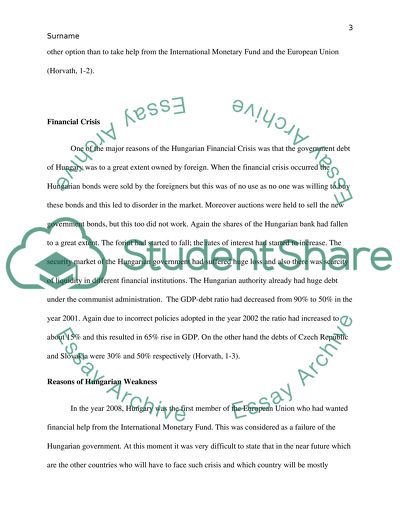 Download file to see previous pages The occurrence of the international financial crisis has forced the financial markets to reexamine their patience to tolerate uncertainty. Day by day as the financial disaster increased, this, in turn, resulted in the reduction of international liquidity and also an increase in uncertainty. On the other hand, the shareholders had started to distinguish among the rising markets and judged that the Hungarian possessions have become riskier. However, it can be concluded that the vulnerability of the Hungarian economy was mostly due to these uncertainties. In this situation, the Hungarian authorities were not very sure in what way they would handle these problems. They examined the market more minutely and had increased the deposit securities as per the European Union policy. But still this policy did not work and the Hungarian government was not able to save the public from this financial crisis and there was instability throughout the economy. So, in such a situation the Hungarian government had no other option than to take help from the International Monetary Fund and the European Union (Horvath, 1-2).
Moreover, auctions were held to sell the new government bonds, but this too did not work. Again the shares of the Hungarian bank had fallen to a great extent. The forint had started to fall; the rates of interest had started to increase. The security market of the Hungarian government had suffered huge loss and also there was the scarcity of liquidity in different financial institutions. The Hungarian authority already had huge debt under the communist administration. The GDP-debt ratio had decreased from 90% to 50% in the year 2001. Again due to incorrect policies adopted in the year 2002 the ratio had increased to about 15% and this resulted in a 65% rise in GDP. On the other hand, the debts of the Czech Republic and Slovakia were 30% and 50% respectively (Horvath, 1-3). Reasons for Hungarian Weakness In the year 2008, Hungary was the first member of the European Union who had wanted financial help from the International Monetary Fund. This was considered as a failure of the Hungarian government. At this moment it was very difficult to state that in the near future which are the other countries who will have to face such a crisis and which country will be most affected. ...Download file to see next pagesRead More
Share:
Tags
Cite this document
(“Analysis of Hungarian Financial Crisis Case Study”, n.d.)
Analysis of Hungarian Financial Crisis Case Study. Retrieved from https://studentshare.org/macro-microeconomics/1397208-hungarian-financial-crisis

CHECK THESE SAMPLES OF Analysis of Hungarian Financial Crisis

In th...
8 Pages(2000 words)Case Study
sponsored ads
Save Your Time for More Important Things
Let us write or edit the case study on your topic "Analysis of Hungarian Financial Crisis" with a personal 20% discount.
GRAB THE BEST PAPER

Let us find you another Case Study on topic Analysis of Hungarian Financial Crisis for FREE!