Comments (0)
Add to wishlistDelete from wishlist
Cite this document
Summary
The author analyzes the gothic romance that has the elements of horror, romanticism as well as fiction in them; the plot is usually placed in a medieval setting. The author focuses on Mary Shelley’s Frankenstein and Robert Louis Stevenson’s Dr. Jekyll and Mr. Hyde. …
Download full paperFile format: .doc, available for editing
HIDE THIS PAPERGRAB THE BEST PAPER92.1% of users find it useful 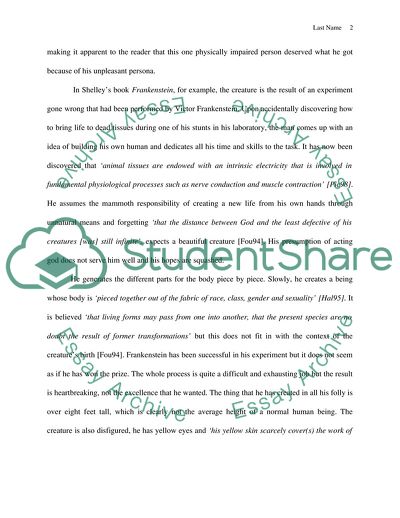 Download file to see previous pages The villainous creatures that these authors have fashioned have sulky demeanors and yet are still appreciated by the masses because it is in their wickedness that they show their humanity which appeals to the emotions as well as the imaginations of the readers.

The world is full of bad and good people, both of whom choose a particular path to cross depending on their personal reasons and experiences. Despite their involvement with the immoral, they are people who always have the option of redeeming themselves. Back then, there was a belief regarding how what one was from the inside was what one looked from the outside. A villain had an unfavorable personality so his character often had deformed bodies, making it apparent to the reader that this one physically impaired person deserved what he got because of his unpleasant persona.

The strange case of dr. Jekyll and mr. Hyde

... from moral borders and pangs of conscience. The only fear that Hyde has is the fear of death. Stevenson showed that you cannot let just a little bit of evil out. If a person does an evil deed voluntarily, like Jekyll did in the personality of Hyde, he turns into the slave of evil. One starts with something little, like some sexual pleasures that Jekyll was looking for, and ends up with senseless cruelty to a little girl and finally murder of Mr. Carew. The evil completely possesses the one who voluntarily chose this path. When Jekyll started to turn into Hyde without his will, he realized that he lost himself forever. Stevenson in his story discovered not only moral transformation of a good person into his evil twin, but also physical...
2 Pages(500 words)Essay

The Strange Case of Dr. Jekyll and Mr. Hyde by Robert Louis

...?The Strange Case of Dr. Jekyll and Mr. Hyde by Robert Louis Stevenson proves to be an enduring literary illumination into the human psyche as the story centers on the conception of humanity as dual in nature, although this theme does not fully emerge until the last chapter, when the whole story is revealed. Stevenson uses an innovative approach to portray the human soul as a battlefield for an “angel” and a “fiend” who are foes in a battle for the possession of the human soul. Every human being contains these opposite forces within him, an alter ego that hides behind a social and polite everyday facade. Jekyll asserts that “man is not truly one, but truly two,” that one is never black nor white and that the situation at hand always brings...
2 Pages(500 words)Essay

... 26 March Repression and Appearances in Dr. Jekyll and Mr. Hyde Some people hate themselves; some hate their societies; while some hate both. In Dr. Jekyll and Mr. Hyde, Robert Louis Stevenson describes Dr. Jekyll who hated himself and his society. He hates his “self” because he cannot balance his conflicting desires. He wants to be seen as a good person, but he also wants to be free to pursue all his desires. Dr. Jekyll also abhors society, because it has imposed unrealistic values, roles, and norms. He lives life like a trapped bird, because society expects him to be good in actions and attitudes. Dr. Jekyll chooses to be a good person, the perfect Victorian model that Evangelicals are proud of. Inside, however, he battles his Id that he...
5 Pages(1250 words)Essay

...? The sign in Robert Louis Stevenson’s Strange Case of Dr Jekyll and Mr. Hyde of The sign in Robert Louis Stevenson’s The Strange Case of Dr Jekyll and Mr. Hyde The sign, as elaborated by Ferdinand de Saussure in Course in General Linguistics opens up the field of linguistics to that of literary analysis as well. The main contribution of Saussure’s with this work lies in the fact that it made it possible for theorists o look at language as not merely something that existed but also something that shaped existence. Language then came to assume a creative role in the ways in which one perceives reality. Language and the weight of tradition and history that it carries becomes an important aspect of it when it comes to analyzing the meaning...
6 Pages(1500 words)Essay

... that not only was Mary Shelley influenced by the exciting changes that were happening during the late 19th century but also the fact that she was also a part of the large movement of radicalism that swept Europe under the philosophy of the Romantics. Her mother, Mary Wollstonecraft was a radical feminist who fought for female suffrage although died during childbirth and her father the poet, William Godfrey were major influences whom she herself had read throughout her childhood. Her union with Percy Bysshe Shelley was another step in which she would emulate her creativity in 'The Modern Prometheus' or better known as 'Frankenstein'. To understand why Mary Shelley chose such a gothic setting as her debut novel we need to explore...
5 Pages(1250 words)Book Report/Review

...Frankenstein-Mary Shelley Mary Shelley's Frankenstein; or, the Modern Prometheus, generally known as Frankenstein, has been one of the most celebrated illustrations of an epistolary novel and its narrative technique has contributed greatly to the success of the novel. Significantly, this novel has featured a convergence of different literary genres such as the romance, the epistolary novel, the Gothic, and the travel stories and the author's narrative strategy has played a vital role in the popularity of the novel. In this epistolary novel, Mary Shelley deals with epistemology which is divided into three volumes and each takes place at a distinct time. In the preface of the novel itself, the effect of the narrative structure...
2 Pages(500 words)Book Report/Review

...The Elements of Evil (Assignment (Grade Year) “It wasnt like a man; it was like some damned Juggernaut” (Stevenson, Chapter, 1). The Elements of Evil The 1886 born ‘The Strange Case of Dr. Jekyll and Mr. Hyde’ is a thrilling allegoric description about a doctor’s change in to an evil human being with excitement growing through the nerves of readers. This wonderful novella was written by renowned English writer Robert Louis Stevenson. This review tends to analyze how effectively Mr. Stevenson tries to figurate the character of dignified Dr. Jekyll into horrific Mr. Hyde, using various symbols of evil. There are ample reasons to support the view that this novel portrays evil in human beings...
2 Pages(500 words)Essay

The Strange Case of Dr. Jekyll and Mr. Hyde adaptation

Good vs Evil in Dr Jekyll and Mr Hyde

Great people are involved in bad things this is the fact of live, yet this does not make them evil (Stevenson pp 28-75).
Using the central characters and the key theme of the duplicity of mankind Louis Stevenson strategically clears the air on the broad theme of good and evil in the book. By use of the character of Dr. Jekyll, the author explains ‘good’. Mr. Utterson who is a lawyer based in London also an old friend of Dr. Jekyll; he has the quality of being loyal to his friends and also concerned about Henry Dr. Jekyll. With this loyalty, he asks him about his pal Mr. Hyde whom he had left his luggage in his will (Cresser N.P). "You know I never approved of it," said the doctor. Mr. Utterson believes that the doctor bed them...
7 Pages(1750 words)Research Paper