Comments (0)
Add to wishlistDelete from wishlist
Cite this document
Summary
The "Achilles and Jason: Great Heroes in Greek Mythology" paper compares the characters of Achilles and Jason. The two were both of noble birth.  In Greek mythology, Achilles was the greatest of the Greek warriors in the Trojan War. He was the son of the sea nymph Thetis and Peleus…
Download full paperFile format: .doc, available for editing
HIDE THIS PAPERGRAB THE BEST PAPER96.1% of users find it useful 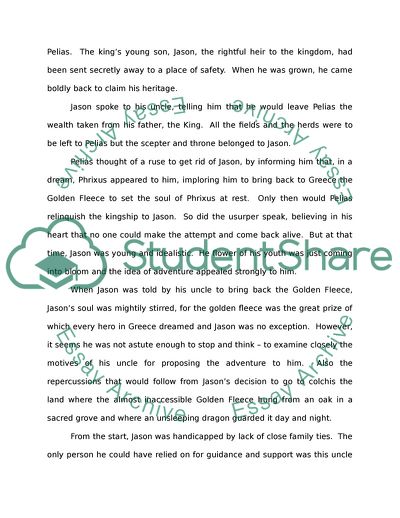 Download file to see previous pages Beye, R,,& Gardner, J., Epic and Romance in the Argonautica of Apollonius.  Carbondale: Southern Illinois University Press, 1982.   Cotterill, H.B., Goethe, Milton & Virgil, Ancient Greece: A Sketch of Its Art, Literature & Philosophy.  New York: Frederick A. Stokes Company, 1913.   Funk & Wagnalls New Encyclopedia, Vol. 1 Funk and Wagnalls, Inc.   Groiler Encyclopedia, New York: Groiler Inc., 1961 Hamilton, E., Mythology, New York:  New American Library, 1943,   Howatson, M.C., ed., The Oxford Companion to Classical Literature. Oxford: Oxford University Press, 1989   Mitchell-Boyask, ‘Study Guide for Reading Homer's Iliad’, Retrieved on December 7, 2006 from http://www.temple.edu/classics/iliadho.html   O’Brien, J., The Transformation of Hera: A Study of Ritual, Hero, and the Goddess in the Iliad.  Lanham, MD: Rowman & Littlefield, 1993.   Rhodes, A., Jason and the Golden Fleece: The Argonautica., Oxford: Oxford University Press, 1995   White, A.T. , Myths and Legends, Golden Press, Inc., 1959. Wilson, D., Ransom, Revenge and Heroic Identity in the Iliad. Cambridge: Cambridge University Press, 2002.    It is also necessary that in the period of his growing up he had caring role models and responsible authority figures.
Both Achilles and Jason of Greek legend fulfill more or less the aforementioned qualities. The two were both of noble birth. In Greek mythology, Achilles was the greatest of the Greek warriors in the Trojan War. He was the son of the sea nymph Thetis and Peleus, king of the Myrmidons of Thessaly. Being the child of a king naturally makes him of royal blood. His mother Thetis, holding him by the heel, immersed him into the waters of the river Styx rendering him immortal except for his heel – the only vulnerable spot in his body.
Jason, too, was of royal blood. Phrixus, the boy saved from death by the ram of the Golden Fleece, had an uncle who was by rights a king in Greece, but had his kingdom taken away from him by his nephew named Pelias. The king’s young son, Jason, the rightful heir to the kingdom, had been sent secretly away to a place of safety. When he was grown, he came boldly back to claim his heritage.
Jason spoke to his uncle, telling him that he would leave Pelias the wealth taken from his father, the King. All the fields and the herds were to be left to Pelias but the scepter and throne belonged to Jason.
Pelias thought of a ruse to get rid of Jason, by informing him that, in a dream, Phrixus appeared to him, imploring him to bring back to Greece the Golden Fleece to set the soul of Phrixus at rest. Only then would Pelias relinquish the kingship to Jason. So did the usurper speak, believing in his heart that no one could make the attempt and come back alive. But at that time, Jason was young and idealistic. He flower of his youth was just coming into bloom and the idea of adventure appealed strongly to him.
When Jason was told by his uncle to bring back the Golden Fleece, Jason’s soul was mightily stirred, for the golden fleece was the great prize of which every ...Download file to see next pagesRead More
Share:
Tags
Cite this document
(Achilles and Jason: Great Heroes in Greek Mythology Term Paper, n.d.)
Achilles and Jason: Great Heroes in Greek Mythology Term Paper. https://studentshare.org/literature/1705625-compare-the-characters-of-achilles-and-jason
(Achilles and Jason: Great Heroes in Greek Mythology Term Paper)
Achilles and Jason: Great Heroes in Greek Mythology Term Paper. https://studentshare.org/literature/1705625-compare-the-characters-of-achilles-and-jason.
“Achilles and Jason: Great Heroes in Greek Mythology Term Paper”. https://studentshare.org/literature/1705625-compare-the-characters-of-achilles-and-jason.
Comments (0)
Click to create a comment or rate a document

CHECK THESE SAMPLES OF Achilles and Jason: Great Heroes in Greek Mythology

grandfather, Pittheus , king of Troezen, got to know, with the oracle’s help, that authority in the Athens would belong to the Aegeus? descendants , so he had lubricated Aegeus ( who was deemed a childless) and let him to sleep with his daughter, Aethra, who had an intimacy with Poseidon that or the previous night (Graves). Theseus grew up as a fearless and courageous boy. When he had reached the 16-years age, his mother Aethra brought him to the place, where was the stone, under which his father, Aegeus, leaving his wife many years ago, left his things – a sword and sandals. He did so, because he was afraid taking Aethra with him, forasmuch as at the Athens there had been foreshadowed the mine against him by his nephews pretendi...
5 Pages(1250 words)Research Paper

... state that there is no lesson that the sexes are necessarily in conflict. Exceptional disruptions serve only to underline the harmony and undisputed male supremacy on which Greek mythology and ritual believe successful societies are built. However, the gods' lusts, though in themselves something which would get them life imprisonment in a modern society, are not trivially exercised but exist in order to beget significant offspring who will have a god at the head of their genealogy. It is doubtful therefore whether this mythology is best viewed as implementing irresponsible male fantasy, though the case of heroes, who can step beyond normal constraints, may be different. Seduction of free-born girls was after all a crime and myth considers...
8 Pages(2000 words)Essay

The Dionysian Cult Dionysius was a Greek god who was known as the god of fertility, his emblem was an erect phallus and he was also known for his healing powers and was hence associated with healing people, so he was also known as the Greek god of healing. Dionysius was a man with extremely beautiful looks and he has been pictured as having long hair, so people who follow this cult follow this tradition specially. Dionysius, according to some, once assumed his fathers thrown for a short time and this was the opportunity that the enemies were looking for, they pounced on the opportunity and started persecuting Dionysius and he tried to escape by transforming him self into a lion, a serpent and a horse but when he assumed the shape...
2 Pages(500 words)Essay

..., due to the wrongdoings of his uncle. The stealing of the Golden Fleece and restoring the Kingdom forms a major part of this myth. His fatal endeavours were supported by prominent Greekheroes, along with blessings from Hera and Goddess Juno. These Greekheroes were the Argonauts, which literally means, 'argo sailors' and they accompanied Jason to Colchis in order to find the Golden Fleece and complete his quest. Do you believe that myth and mythology has had any effect on your personal or professional life Personally, myth and mythology has not left an indelible impression on my life, either professionally or in my personal sphere...
Pages(0 words)Essay

A comparison of creation myths can be very enlightening regarding the values and needs of the people who hold it. Two major cultures that had a great deal in common regarding their creation myths despite great differences in climate were the Greeks and the Norse.
Overall, the creation myths and deity structure of the Greeks and the Norse served to place importance on the same basic elements of life. Both societies held a strong belief in the idea of fate. This concept was represented in both cultures by three female deities. In Norse mythology, these women were called the Norns and were considered demi-goddesses. They also had individual names including Urd (fate), Verdandi (necessity) and Skuld (being) (Lindemans, 1998). Toget...
6 Pages(1500 words)Essay

... argues that war is something families and communities loathe, for it reduces the younger population and weakens the political or public domain by depriving it with great leaders. People see justice as a notion based on reason, established in their societies or communities, but they have a rigid feeling about justice as well, within the community and the family. The vengeance philosophy of war attached to those firm sentiments in the play of Homer and Aeschylus remains open to challenges. References Johnston, I. The Oresteia. Arlington, Virginia: Richer Resources Publications, 2007. Spies, K. The Iliad and the Odyssey in Greek Mythology. New York: Enslow Publishers, 2002....
2 Pages(500 words)Essay

Not long after Agamemnon arrives, he is killed along with the captured Trojan princess named Cassandra, by Clytemnestra and Aegisthus. Subsequently, there begins an effort to avenge the death of the king, Agamemnon, as the Chorus hope for Agamemnon’s son, Oretes, to get back from his exile. Two conflicting ideas of revenge and justice are visible from the stories; Aegisthus and Clytemnestra avenge the death of their siblings and daughter respectively while the Chorus along with Oretes scheme to bring down the order established by Aegisthus and Clytemnestra thereby avenging the death of Agamemnon. Therefore, to conclude who is the real tyrant or victim is a hard judgment in the trilogy as the history of revengeful actions reveal ho...
6 Pages(1500 words)Essay

The article exposes the falsities that surround the historical and ritual sense if the Greek cultures, which were hidden under a smoke-screen. The author is critical in giving a graphic exposition about the childishness that he discovered in these myths by using a classification that led to the discovery point. The precedent example that the author uses is about the stories of Hyacinthus and Narcissus. He uses these stories to depict the falsity that embedded some of the historical Greek myths, which did not depict the real happenings of the historic period or stories.
In this work, the author analyzes different articles about Greek mythology. The author is insightful and incisive in bringing out the facts and falsities that ar...
3 Pages(750 words)Annotated Bibliography

The Greeks understood glory as a means of immortality and it so it something to be sought after through wars and battles. Cities and nations pledged their allegiance to individual gods and looked to their patronage. The temples were the most prominent buildings in every city as they were the bode of the patron god. The gender of the patron god of a city would influence the nature of that particular culture. The god also participated at will in the life of their human subjects as they willed. Therefore since the gods were known to be very actively involved in daily life it was prudent for their roles to be clarified and explained. The ultimate goal was to please the gods and entreat their favor to avoid their wrath or ill will. The...
11 Pages(2750 words)Essay

The researcher states that the landscape of Greece has always played a great role in the development of its people and its myths. Thousands of years ago, the Greeks sailed all over the Mediterranean. Because of their travels, the Greeks encountered people of many different backgrounds. Every time the sailors met people of different origins, they listened to the foreigners’ stories and added them to their collection. The extensive travel of early Greek culture helps to explain why there are many different versions of each myth, and why the myths of many different cultures often seem very similar. In summary, each place played a significant role in the development of each myth. The Greek mythology originated from the ancien...

10 Pages(2500 words)Essay
sponsored ads
Save Your Time for More Important Things
Let us write or edit the term paper on your topic "Achilles and Jason: Great Heroes in Greek Mythology" with a personal 20% discount.
GRAB THE BEST PAPER

Let us find you another Term Paper on topic Achilles and Jason: Great Heroes in Greek Mythology for FREE!