Comments (0)
Add to wishlistDelete from wishlist
Cite this document
Summary
The author concludes that Lombard’s translation of Hesiod’s work is clear and easy to get along with. Works and Days is a poem where it adheres to the reality of what people experience at work and it depicts the world today. Force labor, competition, exploitation are mainly discernible in the poem…
Download free paperFile format: .doc, available for editing
HIDE THIS PAPERGRAB THE BEST PAPER94.1% of users find it useful 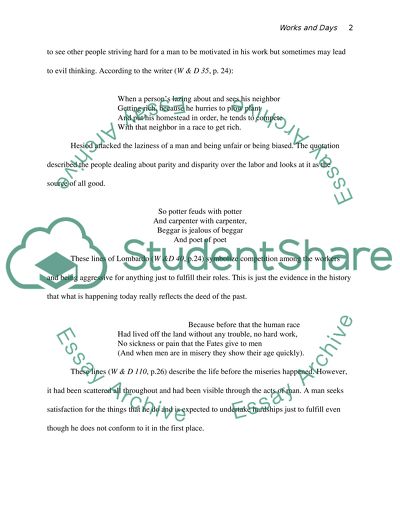 It is such an opportunity to read the works of Hesiod because it depicts a lot of sensitivity and passion for poetry. Hesiod created Works and Days and the Theogony. He divided Works and Days into five ages; the Golden age, Silver age, Bronze Age, Heroic age and the Iron Age (Hesiod 800 B.C/1993). The literary work talked about the pagan ethics, eulogizes hard work and details the lucky and unlucky days of the month for different activities. On the other hand, the Theogony serves as the main foundation of Greek mythology because it defines a clearer view of the creation of the Greek pagan myth.
Discussion
Works and Days is composed of verses where it resembles about the fact that labor is the universal set of man. Conceptualizing work from the point of view of Hesiod is like saying that a man will get by if he is willing to work hard for his living. The poem presents five ages of man that suggests things that a sincere labor could bring good to man. Lombardo translated on the two kinds of strife mentioned (W & D 25, p. 23):
They’ve just got
Completely opposite temperaments.
One of them favors war and fighting. She’s a mean cuss
And nobody likes her, but everybody honors her,
This ornery Eris. They have to: it’s the god’s will.
It suggests that work is sometimes done by force where in a man needs to command his superior. It is necessary to work and man has no choice but to work because it defines his living and it is, according to the writer, the will of god. Works and Days presents the things that can be taken account in considering the real essence of work in the real scenario. Sometimes, it is vital to see other people striving hard for a man to be motivated in his work but sometimes may lead to evil thinking. According to the writer (W & D 35, p. 24):
When a person’s lazing about and sees his neighbor
Getting rich, because he hurries to plow plant
And put his homestead in order, he tends to compete
With that neighbor in a race to get rich.
Hesiod attacked the laziness of a man and being unfair or being biased. The quotation described the people dealing about parity and disparity over the labor and looks at it as the source of all good.
So potter feuds with potter
And carpenter with carpenter,
Beggar is jealous of beggar
And poet of poet
These lines of Lombardo (W &D 40, p.24) symbolize competition among the workers and being aggressive for anything just to fulfill their roles. This is just the evidence in the history that what is happening today really reflects the deed of the past.
Because before that the human race
Had lived off the land without any trouble, no hard work,
No sickness or pain that the Fates give to men
(And when men are in misery they show their age quickly).
These lines (W & D 110, p.26) describe the life before the miseries happened. However, it had been scattered all throughout and had been visible through the acts of man. A man seeks satisfaction for the things that he do and is expected to undertake hardships just to fulfill even though he does not conform to it in the first place.
Conclusion
Lombard’s translation of Hesiod’s work is clear and easy to get along with. Works and Days is a poem where it adheres the reality what people experiences at work and it depicts the world today. Force labor, just and unjust activities, competition, exploitation are mainly discernible on the poem. Work can be apparent to good or bad. A person is unsure of what it takes to have a good life, but more often than not it takes a very tough way to attain what a man desires.
References
Hesiod, (1993). “Works and Days; Theogony”. (Lombardo, S. Trans; Lamberton, R. Intro.). Hackett Publishing Company. (Original work published 800 B.C) Read More
Share:
Tags
Cite this document
(“The Discussion of Works and Days and the Theogony by Hesiod Essay”, n.d.)
The Discussion of Works and Days and the Theogony by Hesiod Essay. Retrieved from https://studentshare.org/literature/1557792-philosophy-reaction-paper

“The Discussion of Works and Days and the Theogony by Hesiod Essay”, n.d. https://studentshare.org/literature/1557792-philosophy-reaction-paper.
Comments (0)
Click to create a comment or rate a document

...?HESIOD: WORKS AND DAYS Discuss whether what is left under the rim of the pithos brought by the first woman is intended to be a blessing or a curse, or both. Overview of what was left in the rim of the Pithos In the “Works and Days”, Hesiod emphasizes the clear place of man before his maker. That is, the power of Zeus is magnified so high above that of humankind that humankind is made to submit totally to Zeus for power and fame. Through the power of Zeus, humankind could be belittled to almost nothing. It is in the direction of this that Hesiod wrote that “Through him mortal men are famed or un-famed”...
2 Pages(500 words)Book Report/Review

...? Analysis of Works and Days Introduction The Theogony of Hesiod is a story that illustrates the interconnection between the existence of the gods and humanity. The power of the gods to change the ability of humans is illustrated in the story of Hesiod. The meeting with the gods occurs on the foot of Mount Hellion in Boetia when Hesiod was a shepherd (Hesiod, 2004, p. 218). The meeting with the gods led to the favor of Hesiod. These goddesses impart their knowledge and talent. Hesiod is about the birth of the gods symbolized by the title of the poem. In the poem the gods are synonymous with the universe (cosmos). The poem illustrates the disorderly behavior of the gods. It is the grace of the Muses that enables the choir to sing... and the...
3 Pages(750 words)Assignment

...Hesiod's Works and Days, Virgil's Georgics and Hesiod's Theogony Hesiod's 'theogony' is a large-scale synthesis of a vast variety of local Greek traditions concerning the gods, organized as a narrative that tells how they came to be and how they established permanent control over the cosmos. It is the first Greek mythical cosmogony (Hesiod's Theogony, not dated). In my personal view, Hesiod's theogony manifests the order of the universe according to power and authority between gods and humans. In Greek mythical cosmogony, the origin of the world was...
1 Pages(250 words)Essay

...THIRTEEN DAYS In the film Thirteen Days, the story revolves around the threat of nuclear war because of USSR's military build up in Cuba. The White House and the Pentagon was alarmed by the action of Soviet government prompting them to demand pull out of the nuclear weapons by the USSR in Cuba. Instead of heeding the US call for nuclear pull out, Soviet Union increased military activity creating more tensions on the American side. The US President John F. Kennedy because of this reason, left with three options: one is to call for international pressures against aggressive Soviet military build up; Second, to have nuclear exchange; and third, air strike. The pressures mounted on him to authorize 'the...
4 Pages(1000 words)Movie Review

...Review of Burmese Days by George Orwell Boundaries are important to every person on the planet whether it is physical or implied boundaries. In Orwells Burmese Days, there are many boundaries but the most important one seems to be racism. This novel shows the difficulty that prejudice, racism and misunderstanding can have to a larger population. The challenge for this novel is that it is about racism but it also shows what happens to someone when they are immersed in a situation where at first they are an underdog and then they are accepted. In these types of situations it seems that an individual can change their convictions about themselves in order to be accepted by a group. Some people would call...
5 Pages(1250 words)Book Report/Review

...Thirteen Days The book Thirteen Days: A Memoir of the Cuban Missile Crisis is written by Robert Kennedy. As is clear from the title itself, the book describes the Cuban missile crisis that took place in the year 1962. It gives the account of the meetings by the Executive Committee, a team handpicked by the US President Kennedy. The ExComm’s job was to use their skills to work out the delicate situation between the United States of America and the USSR after they discovered Soviet nuclear missiles in Cuba. They had to solve the problem in a manner which would not spark of another world war. The author writes about the way the President handled the situation quite successfully despite the...
2 Pages(500 words)Book Report/Review

...21 Days October 24th, Today I did not feel any happiness. I found out that there were assignments I was yet to do that I knew nothing about. In addition, the lecturer chose me to give a presentation tomorrow, despite not giving me time to prepare. I also met my academic mentor today about my falling behind in class work. October 25th, 2013 I did my presentation today, and it went well. Although it was successful, I am still glad that I am done with it. However, one of my assignments was late, and the lecturer deducted 15% from my total points. In spite of my attempts to explain having to deal with my sister’s wedding, the lecturer was deaf to me. What to do? October 26th, 2013 Today started well after...
4 Pages(1000 words)Essay

... America’s Happy 50s It is undeniable that 1950’s were arguably happy moments for America. The 50s marked an end to a prolonged war and unrest. Whereas the World War II period was marked by instability, political unrest, economic crisis and familial issues, the 50s brought in a new dispensation of relaxed mood, economic growth, technological advancement, and general peace of mind. Indeed, the Americans began to enjoy better living conditions, better wages, and became the first beneficiaries of new technologies. The 50s benefited many Americans, encouraged family, and societal bonding. Additionally, the improved economic conditions catapulted many Americans from low class to medium income earners. Most families could afford a car... America’s...
1 Pages(250 words)Assignment

The Character of Hermes in Mythology

...descended from the gods to establish self worth. Portrayals of myths were everywhere; on walls, in the home and outdoors. One could see many gigantic statues and murals in public places. The myths were also used as teaching tools to convey a moral message or for entertainment like fairy stories. Ovid takes for granted this knowledge to fill in the gaps in his version of myths. As Mercury and Hermes are virtually interchangeable, I have used Ovid’s Metamorphoses to illustrate Mercury’s role as divine messenger but the same myth featuring Hermes exists. Homer's Odyssey (c. 800 BCE) alludes to the story of Argus by referring to Hermes as 'the guide, the slayer of Argus' (8.332). Similar references to Argus appear in...
13 Pages(3250 words)Research Paper
sponsored ads
Save Your Time for More Important Things
Let us write or edit the essay on your topic "The Discussion of Works and Days and the Theogony by Hesiod" with a personal 20% discount.
GRAB THE BEST PAPER

Let us find you another Essay on topic The Discussion of Works and Days and the Theogony by Hesiod for FREE!