Comments (0)
Add to wishlistDelete from wishlist
Cite this document
Summary
Date Holden Caulfield Holden Caulfield is the main character or protagonist and narrator of the novel. Holden is a sixteen year-old, funny, sarcastic, and brutally honest observer. Throughout the course of the novel, Holden described his three-day adventures in New York after being expelled from Pencey Prep…
Download full paperFile format: .doc, available for editing
HIDE THIS PAPERGRAB THE BEST PAPER97.6% of users find it useful 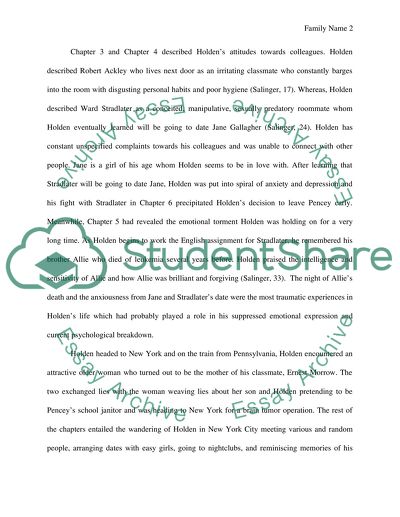 Download file to see previous pages This reflects how extremely judgmental Holden is that he criticized and philosophized even his brother. Although full of contempt for the prep school, Holden managed to say goodbye to his school and visit Mr. Spencer, Holden’s elderly history teacher at Pencey who would like to put some sense in the head of Holden by trying to help him (Salinger, 13). In Chapter 2, Mr. Spencer tried to lecture Holden by saying that “Life is a game, boy. Life is a game that one plays according to the rules” (Salinger, 29). This has made Holden not to heed in any of his advices as Holden has superficial perceptions of people who are insecure such as teachers who act like teachers by assuming a different demeanor in class than they do in conversation. Chapter 3 and Chapter 4 described Holden’s attitudes towards colleagues. Holden described Robert Ackley who lives next door as an irritating classmate who constantly barges into the room with disgusting personal habits and poor hygiene (Salinger, 17). Whereas, Holden described Ward Stradlater as a conceited, manipulative, sexually predatory roommate whom Holden eventually learned will be going to date Jane Gallagher (Salinger, 24). Holden has constant unspecified complaints towards his colleagues and was unable to connect with other people. Jane is a girl of his age whom Holden seems to be in love with. After learning that Stradlater will be going to date Jane, Holden was put into spiral of anxiety and depression and his fight with Stradlater in Chapter 6 precipitated Holden’s decision to leave Pencey early. Meanwhile, Chapter 5 had revealed the emotional torment Holden was holding on for a very long time. As Holden begins to work the English assignment for Stradlater, he remembered his brother Allie who died of leukemia several years before. Holden praised the intelligence and sensitivity of Allie and how Allie was brilliant and forgiving (Salinger, 33). The night of Allie’s death and the anxiousness from Jane and Stradlater’s date were the most traumatic experiences in Holden’s life which had probably played a role in his suppressed emotional expression and current psychological breakdown. Holden headed to New York and on the train from Pennsylvania, Holden encountered an attractive older woman who turned out to be the mother of his classmate, Ernest Morrow. The two exchanged lies with the woman weaving lies about her son and Holden pretending to be Pencey’s school janitor and was heading to New York for a brain tumor operation. The rest of the chapters entailed the wandering of Holden in New York City meeting various and random people, arranging dates with easy girls, going to nightclubs, and reminiscing memories of his dead brother Allie and his little sister Phoebe and Jane fooling around Stradlater. Holden feel disappointed of the adult world and with feeling of alienation and intrusion of these thoughts, Holden fell into the midst of anxiousness and depression. At the end of the day, Holden arranged a date with a prostitute named Sunny only to know that he was unable to have sex with her and that Sunny extorts money from Holden before striking him (Salinger, 83). The next day, Holden met two nuns bought a record for Phoebe, went to the theater with Sally Hayes, but later on, repelled by his shallowness (Salinger, 101). The ...Download file to see next pagesRead More
Share:
Tags
Cite this document
(“The Development of The Main Character (Protagonist) in The Catcher In Essay”, n.d.)
Retrieved from https://studentshare.org/literature/1440292-discuss-the-development-of-the-main-character
(The Development of The Main Character (Protagonist) in The Catcher In Essay)
https://studentshare.org/literature/1440292-discuss-the-development-of-the-main-character.
“The Development of The Main Character (Protagonist) in The Catcher In Essay”, n.d. https://studentshare.org/literature/1440292-discuss-the-development-of-the-main-character.
Comments (0)
Click to create a comment or rate a document

Any country first needs to go through economic liberalization and political liberalization before finally settling into a stable democratic situation. Democracy should not at any one point be viewed as if it were socialism, but should be seen as a means of promoting economic development through accountability and protection of individual lawful rights and interests...accountability in the sense that the respective leaders are able to fight corruption, enhance social harmony, strengthen public trust and more importantly empower government institutions that are directly in touch with the people (Liu, 2008, p.1-2). Owing to the Chinese well informed and affluent society on top of having a very dynamic economy, the political change wh...
7 Pages(1750 words)Coursework
sponsored ads
Save Your Time for More Important Things
Let us write or edit the essay on your topic "The Development of The Main Character (Protagonist) in The Catcher In The Rye" with a personal 20% discount.
GRAB THE BEST PAPER

Let us find you another Essay on topic The Development of The Main Character (Protagonist) in The Catcher In The Rye for FREE!