Comments (0)
Add to wishlistDelete from wishlist
Cite this document
Summary
Connections: Art and Poetry While the nature of art and literature has greatly shifted over the years, it’s clear there are a number of universal human concerns that have emerged across historical epochs and artistic mediums. When examining perhaps the most central artistic mediums of the preceding centuries, one notes the strong importance of literature, poetry, and the visual arts…
Download full paperFile format: .doc, available for editing
HIDE THIS PAPERGRAB THE BEST PAPER91.4% of users find it useful 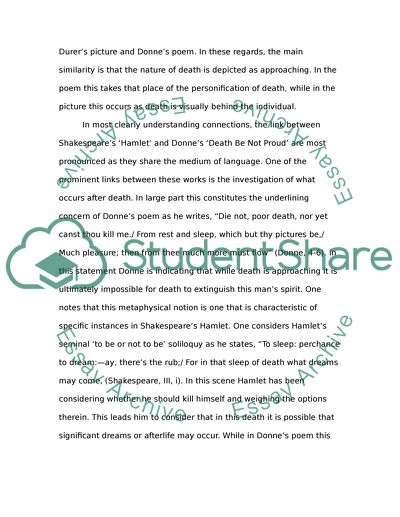 Download file to see previous pages Still, they are recognized as emerging from divergent artistic styles, with Shakespeare’s work constituting tragic drama, Donne’s poem understood as metaphysical poetry, and Durer’s work one of the visual arts. Still, perhaps the most pervasive theme linking these works is their meditation on death. Albrecht Durer’s work when compared to Hamlet shares the existence of a ghost-like figure. In these regards, one considers the ghost-like death figure in the picture and the ghost of Hamlet’s father in the play. The two are connected as they always remind the reader and the people in the work that death is approaching. Another notable connection occurs between Albrecht Durer’s picture and Donne’s poem. In these regards, the main similarity is that the nature of death is depicted as approaching. In the poem this takes that place of the personification of death, while in the picture this occurs as death is visually behind the individual. In most clearly understanding connections, the link between Shakespeare’s ‘Hamlet’ and Donne’s ‘Death Be Not Proud’ are most pronounced as they share the medium of language. One of the prominent links between these works is the investigation of what occurs after death. In large part this constitutes the underlining concern of Donne’s poem as he writes, “Die not, poor death, nor yet canst thou kill me./ From rest and sleep, which but thy pictures be,/ Much pleasure; then from thee much more must flow” (Donne, 4-6). In this statement Donne is indicating that while death is approaching it is ultimately impossible for death to extinguish this man’s spirit. One notes that this metaphysical notion is one that is characteristic of specific instances in Shakespeare’s Hamlet. One considers Hamlet’s seminal ‘to be or not to be’ soliloquy as he states, “To sleep: perchance to dream:—ay, there’s the rub;/ For in that sleep of death what dreams may come, (Shakespeare, III, i). In this scene Hamlet has been considering whether he should kill himself and weighing the options therein. This leads him to consider that in this death it is possible that significant dreams or afterlife may occur. While in Donne’s poem this afterlife is understood to be pleasurable, for Hamlet it constitutes a great mystery to which he wonders about the possibilities. While Shakespeare and Donne’s texts both explore concerns regarding death and metaphysical transcendence, it’s clear that Durer’s visual work similarly meditates on these concerns. This work has been examined as, “Durer's knight rides past Death on a Pale Horse, who holds out an hourglass as a reminder of life's brevity” (“Met Museum”). In these regards, in addition to exploring questions of moral virtue, also explores the impending nature of death. While Durer’s work places more emphasis on living the active life as a means of escaping death, Shakespeare and Donne’s work consider the nature of life after death more thoroughly. Still, all three works call to mind the personification of death into a sort of spectre; this is seen as Donne’s work directly addresses the approaching death, Durer’s work has a visual depiction of it, and Hamlet’s deceased father becomes a prominent character in the drama. In this context ...Download file to see next pagesRead More
Share:
Tags
Cite this document
(“Connections: Art and Poetry Essay Example | Topics and Well Written Essays - 750 words”, n.d.)
Connections: Art and Poetry Essay Example | Topics and Well Written Essays - 750 words. Retrieved from https://studentshare.org/literature/1439330-connections-art-and-poetry
(Connections: Art and Poetry Essay Example | Topics and Well Written Essays - 750 Words)
Connections: Art and Poetry Essay Example | Topics and Well Written Essays - 750 Words. https://studentshare.org/literature/1439330-connections-art-and-poetry.
“Connections: Art and Poetry Essay Example | Topics and Well Written Essays - 750 Words”, n.d. https://studentshare.org/literature/1439330-connections-art-and-poetry.
Comments (0)
Click to create a comment or rate a document

CHECK THESE SAMPLES OF Connections: Art and Poetry

Leadership Is an Art

... and coming to resolution. The author describes her work with a young boy who had suffered a sudden and very traumatic experience when a car crashed into a restaurant where he was sitting and pinned him to the table. He suffered head trauma among his injuries. Mallay was concerned about the emotional and psychological trauma that would undoubtedly accompany such an experience. She reported successful results after fifteen sessions of art therapy. There was greater expression of emotions, less sleep difficulties, decrease in the auditory and visual hallucinations that had accompanied the accident. Through his drawings he had gone through the three stages of recovery from PTSD; stabilization by connecting with and forming a safe bond...
12 Pages(3000 words)Research Paper

Other than the exhibition, the ICA provided a timely educative forum dubbed the fox reading room. This venture provided relevant resources, tools and the much-needed convenience that motivated people from diverse backgrounds to engage in an open and creatively imaginative program hence revolutionizing art.

Owing to the fact that the ICA idea was initially conceived by critics who included poets, anarchists, historians and artists, the theoretical bit of art and its value in enhancing the practicality, cannot by any means be overlooked. In other words, the ICA literary presented a form of “laboratory” or “playground” for contemporary artists to explore their minds, emotions, and ideas. In trying t...
7 Pages(1750 words)Term Paper

...Graffiti: Art or Crime? by Graffiti is a common way of expression for humanity since ancient times but the attitude to it remains controversial. To define whether graffiti is a crime or art it is important to know the difference between such graffiti styles such as “bombing” and “burning”. The last one serves as a means of self-expression and in most cases requires solid painting skills, understanding of composition, colors, and technique. This type of graffiti is connected to social protest against injustice in most cases. Serious pieces of “burning” can take different forms: black and white, colorful, depicting people and parodying known masterpieces. Simple “bombing” with huge tags can hardly be considered art because it lacks...
8 Pages(2000 words)Case Study
sponsored ads
Save Your Time for More Important Things
Let us write or edit the essay on your topic "Connections: Art and Poetry" with a personal 20% discount.
GRAB THE BEST PAPER

Let us find you another Essay on topic Connections: Art and Poetry for FREE!