Comments (0)
Add to wishlistDelete from wishlist
Cite this document
Summary
This essay describes "The Nature of Blood", that captures the intricacies coming about as time goes by as a result of ties from the past and how people acquire their identities. Other possible perceptions relate to how they use these identities as well as the propagation of relations with people of different identities…
Download full paperFile format: .doc, available for editing
HIDE THIS PAPERGRAB THE BEST PAPER93.3% of users find it useful 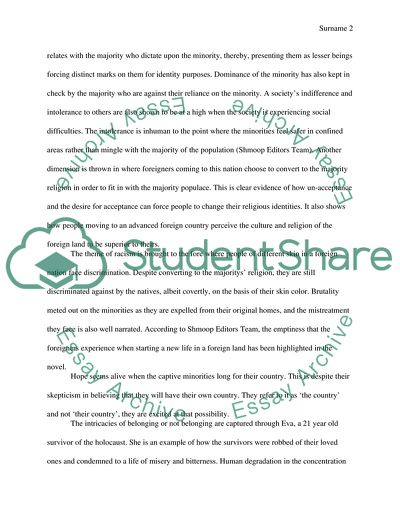 Download file to see previous pages This essay discusses that the intricacies of belonging or not belonging are captured through Eva, a 21-year-old survivor of the Holocaust. She is an example of how the survivors were robbed of their loved ones and condemned to a life of misery and bitterness. Human degradation in the concentration camps, as well as liberation, is shown through Eva. The Jews have driven away from Germany; Eva who was a victim of the chase represents a generation whose childhood was robbed because of hate and mistrust. She grew miserable with ingrained hurts. The misery they underwent is brought out where the Jews feel safe being restricted from certain things. Indeed, their tormentors win in their quest to make them feel like lesser beings.
Once discriminated against, the victims relive those experiences, and it affects their relations later in life. This is evident when Eva moves to England, with a promise of marriage where she is still discriminated against. Malka and Othello further depict another angle of discrimination that is racism. Malka is an Ethiopian and Othello a Moore both from Africa who go to the advanced country and face discrimination because of their race “…a river should never forget its spring…”. With Malka's and Othello's incidences occurring in the 20th century and late 1500's to early 1600's respectively, it shows that this discrimination has been around for a long time. It also implies that racism and other forms of discrimination are still rampant even in today’s society.

Internal marketing is a concept which has been found to be especially useful in service organizations and refers to the marketing efforts that are made to...
72 Pages(18000 words)Dissertation

The storms may be dust or the sand, hail and the thunder but they cause destruction and result in a total shutdown of business due to damage to the buildings.
Torrential rainfall can also add to an economic crisis and huge losses for rain also affects the buildings especially the acid rain (Wallace, Alfred Russel, 1889). This type of rain is corrosive in nature which results in deteriorating structures and a lot of costs are required for the maintenance (J. S. 0guntoyinbo and F. 0. Akintola, 1983). The acid rainfall causes the structure to degrade which results in increased requirements not only of cost but also increased manpower. Nowadays, we see such problems occur in places where the countries are very industrialize...
7 Pages(1750 words)Case Study
sponsored ads
Save Your Time for More Important Things
Let us write or edit the essay on your topic "The Nature of Blood comes as the Manner of relationships" with a personal 20% discount.
GRAB THE BEST PAPER

Let us find you another Essay on topic The Nature of Blood comes as the Manner of relationships for FREE!