Comments (0)
Add to wishlistDelete from wishlist
Cite this document
Summary
Slave trade started when European countries began exploring of rest of the world. The supportive monarchies in Europe enabled the more adventurous to expand the boundaries of their nations across continents. …
Download full paperFile format: .doc, available for editing
HIDE THIS PAPERGRAB THE BEST PAPER91.1% of users find it useful 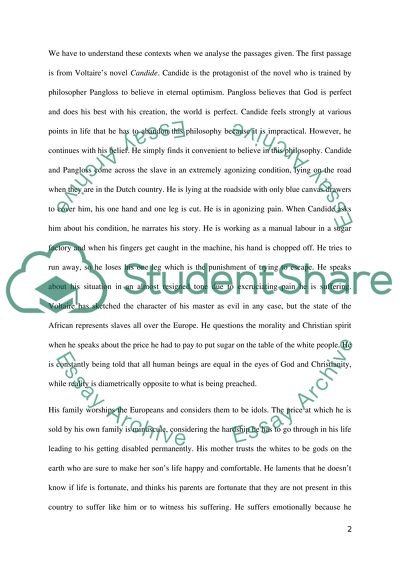 Slave trade became a prominent and lucrative trade.The prosperity of western countries accelerated immensely because of the slaves that were brought in from the African continent. African people could survive tropical conditions and diseases and were good at agriculture and maintaining cattle.
2. In the triangular trade, the first stage involved taking manufactured good from Europe to Africa. These good were exchanged for slaves. In the second stage the slaves were shipped from Africa to Europe and the third stage involved shipping of manufactured goods from labour plantations run by slaves to Europe for trade.
3. Initially Portugal monopolised the slave trade, followed by the Dutch and other European nations. The slave trade also crossed the boundaries and extended to America. Many African kings and tribal heads co-operated the Europeans in supplying people from their or other tribes as slaves for the trade.
4. The slaves were picked in large numbers from the African continent, as the survival rate in transit for them was very low. We have to understand these contexts when we analyse the passages given. The first passage is from Voltaire’s novel Candide. Candide is the protagonist of the novel who is trained by philosopher Pangloss to believe in eternal optimism. Pangloss believes that God is perfect and does his best with his creation, the world is perfect. Candide feels strongly at various points in life that he has to abandon this philosophy because it is impractical. However, he continues with his belief. He simply finds it convenient to believe in this philosophy. Candide and Pangloss come across the slave in an extremely agonizing condition, lying on the road when they are in the Dutch country. He is lying at the roadside with only blue canvas drawers to cover him, his one hand and one leg is cut. He is in agonizing pain. When Candide asks him about his condition, he narrates his story. He is working as a manual labour in a sugar factory and when his fingers get caught in the machine, his hand is chopped off. He tries to run away, so he loses his one leg which is the punishment of trying to escape. He speaks about his situation in an almost resigned tone due to excruciating pain he is suffering. Voltaire has sketched the character of his master as evil in any case, but the state of the African represents slaves all over the Europe. He questions the morality and Christian spirit when he speaks about the price he had to pay to put sugar on the table of the white people. He is constantly being told that all human beings are equal in the eyes of God and Christianity, while reality is diametrically opposite to what is being preached. His family worships the Europeans and considers them to be idols. The price at which he is sold by his own family is minuscule, considering the hardship he has to go through in his life leading to his getting disabled permanently. His mother trusts the whites to be gods on the earth who are sure to make her son’s life happy and comfortable. He laments that he doesn’t know if life is fortunate, and thinks his parents are fortunate that they are not present in this country to suffer like him or to witness his suffering. He suffers emotionally because he blames himself for acutely failing to fulfil expectations of his parents. He compares life of a slave to pets and dogs and thinks that his life is even less valuable than that of animals. In the second passage Gronniosaw tells his life story. His story remained under ...Download file to see next pagesRead More
Share:
Tags
Cite this document
(“Understanding Slavery Essay Example | Topics and Well Written Essays - 1250 words”, n.d.)
Retrieved from https://studentshare.org/literature/1438279-write-an-essay-of

CHECK THESE SAMPLES OF Understanding Slavery

While the Hampton is a representative place of life during the eighteenth and nineteenth century in Maryland, Fort McHenry was a representation of the heroic fight for the civil and political challenges. Fort McHenry represented the place that battled the British and gave to the country the stars and stripes anthem. Baltimore was not a major fighting point during the civil war but played a strategic role because of its position. All troops and movement of men and material need to flow through Maryland to reach the war fronts of the south. Fort McHenry was the prison for the supporters of the secession during this period. However, Fort McHenry played a significant role during the fight with the British in 1812. There is also eviden...
6 Pages(1500 words)Term Paper

According to Kofi A. Annan, the former Secretary-General of the United Nations, there are many things that a state must consider when extending humanitarian interventions. First, when we talk of humanitarian interventions, we should never limit our definition of this term solely on the “use of force”2. Second, when we talk about humanitarian interventions, we should bear in mind that the traditional definition of the sovereignty of states is not the only obstacle that we must face3. Clearly, a state cannot just intervene in the affairs of another at a whim. However, the sad truth about governments is that there are times when the sovereign governments of states are the ones that are actually posing great treats towards...
15 Pages(3750 words)Term Paper

Understanding and Implementation of Co-Branding

...THESIS PROPOSAL ON CO-BRANDING Inserts His/Her Inserts Grade Inserts 5th November’ AIMS The purpose of writing this thesis proposal is to develop an outline for research that should be employed while writing the research paper. This proposal will serve as a guideline for my research on the subject of co-branding and provide a basis of understanding of the basic concepts pertaining to the subject. OBJECTIVES The objective of this thesis proposal is to analyze and discuss the methods and strategies that can be applied to improve the understanding and implementation of co branding. This proposal focuses on developing a clear understanding of the theoretical concepts related to branding, highlight the research methodology suitable...
10 Pages(2500 words)Thesis Proposal

Understanding the Industrial Revolution: Its Causes and Consequences

Understanding Language on a Post-Structuralist Thinking

Besides, the identity of the author is a stable self having a single discernible intent is considered as fictional. However, post-structuralism refutes the notion that a literary text has a single purpose and meaning as well as singular existence. Nonetheless, each reader creates a new and individual meaning, purpose and existence of a given text. Besides the literary theory, this situation is usually generalizable to any particular situation that has the subject perceiving a sign3.
In the post-structuralist approach to the textual analysis, the reader usually replaces the author as the main subject of iniquity. This displacement is commonly known as destabilizing the author, even though it has a significant impact on the tex...
6 Pages(1500 words)Assignment
sponsored ads
Save Your Time for More Important Things
Let us write or edit the essay on your topic "Understanding Slavery" with a personal 20% discount.
GRAB THE BEST PAPER

Let us find you another Essay on topic Understanding Slavery for FREE!