Comments (0)
Add to wishlistDelete from wishlist
Cite this document
Summary
The researcher analyzes conflicts in Kate Chopin's The Storm and Desiree's baby. The researcher states that most of Kate’s works featured the emancipation of women and feminism, and she is regarded as the predecessor of feminism in the world…
Download full paperFile format: .doc, available for editing
HIDE THIS PAPERGRAB THE BEST PAPER94.7% of users find it useful 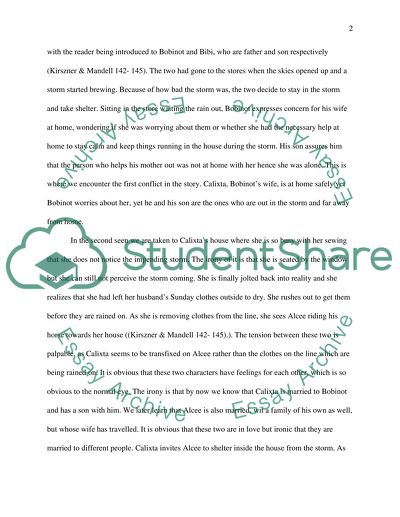 Download file to see previous pages This research will begin with the statement that Kate Chopin, nee Kate O'Flaherty was a 19th-century writer from New Orleans in Louisiana, USA. She is mostly renowned for her works in collections of short stories like The Story of an Hour, The Storm and Desiree’s baby. She is also credited to have written two novels, titled The Awakening and At Fault. Most of her stories are set in her homeland of Louisiana, where she was born to one of the most prominent families in the state. Though she was later acclaimed as one of the most accomplished short story and article writers, Kate never made much money out of her writing, and her two novels received wide criticisms on literary and moral standards. However, Kate’s prowess in writing short stories and narrating them was very visible in her from a very young age. Kate had great admiration for the works of Sir Walter Scott and Charles Dickens, whom she considered her role models in writing, and who also influenced many of her writings. She actually dropped out of school in order to pursue her writing and other arts such as music. One of her most celebrated short stories was The Storm, which she authored in the summer of 1898. The Storm is a story about love, marriage, the role of sex in marriage and happiness and family. The storyline is set in Louisiana in the late 19th century. The story opens with the reader being introduced to Bobinot and Bibi, who are father and son respectively. (Kirszner & Mandell 142- 145). The two had gone to the stores when the skies opened up and a storm started brewing. Because of how bad the storm was, the two decide to stay in the storm and take shelter. Sitting in the store waiting the rain out, Bobinot expresses concern for his wife at home, wondering if she was worrying about them or whether she had the necessary help at home to stay calm and keep things running in the house during the storm. His son assures him that the person who helps his mother out was not at home with her hence she was alone. This is where we encounter the first conflict in the story. Calixta, Bobinot’s wife, is at home safely yet Bobinot worries about her, yet he and his son are the ones who are out in the storm and far away from home.
In the second seen we are taken to Calixta’s house where she is so busy with her sewing that she does not notice the impending storm. The irony of it is that she is seated by the window but she can still not perceive the storm coming. She is finally jolted back into reality and she realizes that she had left her husband’s Sunday clothes outside to dry. She rushes out to get them before they are rained on. As she is removing clothes from the line, she sees Alcee riding his horse towards her house ((Kirszner & Mandell 142- 145).). The tension between these two is palpable, as Calixta seems to be transfixed on Alcee rather than the clothes on the line which are being rained on. It is obvious that these two characters have feelings for each other, which is so obvious to the normal eye. The irony is that by now we know that Calixta is married to Bobinot and has a son with him. We later learn that Alcee is also married, wit a family of his own as well, but whose wife has travelled. It is obvious that these two are in love but ironic that they are married to different people. Calixta invites Alcee to shelter inside the house from the storm. As the storm rages on, Calixta and Alcee are at the window watching as the storm continues. A bolt of lightning causes Calixta to fall back, right into Alcee’s arms. In a matter of seconds, a storm is brewed in the house as the two ignite their passion for each other. We learn that the two had been involved with each other in the past. Unable to hold it back, the two succumb to their passions and as the storm wanes outside, they fall into ...Download file to see next pagesRead More
Share:
Tags
Cite this document
(“Conflicts in Kate Chopin's The Storm and Desiree's Baby Essay”, n.d.)
Conflicts in Kate Chopin's The Storm and Desiree's Baby Essay. Retrieved from https://studentshare.org/literature/1437703-compare-and-contrast-conflicts-in-kate-chopin-s

The Works of Kate Chopin

The use of a mix of economic and military elements definitely does increase the chances of success in third-party interventions in intrastate conflicts. So too does the suggestion of the intervention by a large nation, due to its ability to bring into play a greater economic and military might, but that would be subject to the motivation of the large nation in the third-party intervention, and its intervention accepted with trust by all the conflicting elements. However, the suggestion that intervention with policies weighted in favor of the government does not go down well, as the issue of fairness in approach is absent.
The author points out on the basis of the analysis that ideological reasons are the cause for a larger nu...
6 Pages(1500 words)Assignment

The police or military usually conduct security operations. In the international arena, the UN Security Council is empowered to dispatch peacekeeping forces to trouble areas.
As for development, it refers to the processes and strategies through which societies and states work to achieve more prosperous and equitable standards of living. Development activities are undertaken to promote socio-economic growth, provide education and health services, and build infrastructure facilities. Among the agencies that provide development assistance to nations in need include the various specialized UN agencies, bilateral and multilateral donor organizations, international financial institutions, development banks, and international NGOs....
9 Pages(2250 words)Assignment

...Topic: Chinua Achebe’s “Things fall apart” Number: Conflicts and conflict resolution- Chinua Achebe’s “Things fall apart” Human beings, unlike other primates, are biologically adapted for culture from birth due to their unique social cognition. From birth, children begin to interact with others in various activities such as gestural communication, gaze following and social referencing. Such skills usually engender cases of cultural learning that promote language acquisition, use of cultural tools, discourse skills and other activities, that ensure the culture maintains long life(Tomasello p.550) . Culture may mean a set of shared paradigms that reflect the values, attitudes and beliefs of a person, together with the tools and artifacts...
9 Pages(2250 words)Assignment

The Awakening by Kate Chopin

...). Fletcher, Marie. "The Southern Woman in the Fiction of Kate Chopin."Louisiana History (1966): 117-132. Radcliff-Umstead, Douglas. "Literature of Deliverance: Images of Nature in The Awakening." Details: Southern Studies 1.2 (Summer 1990): p127-147. (1990). Wolff, Cynthia Griffin. "Kate Chopin and the Fiction of Limits:" Désirées Baby"."The Southern Literary Journal (1978): 123-133....She plays an important role in which the technique of focalization, where representations of nature depict the real scene as physically as seen by some characters and as psychologically acknowledged by those identical actors in the story.
sponsored ads
Save Your Time for More Important Things
Let us write or edit the essay on your topic "Conflicts in Kate Chopin's The Storm and Desiree's Baby" with a personal 20% discount.
GRAB THE BEST PAPER

Let us find you another Essay on topic Conflicts in Kate Chopin's The Storm and Desiree's Baby for FREE!