Comments (0)
Add to wishlistDelete from wishlist
Cite this document
Summary
In the paper “Domestic Violence: A Rose for Emily” the author analyzes the short story written by Faulkner, which manifests aspects of domestic violence in terms of the behavior exhibited by the main character, Emily, towards her potential partner, Homer Barron…
Download free paperFile format: .doc, available for editing
HIDE THIS PAPERGRAB THE BEST PAPER91.3% of users find it useful 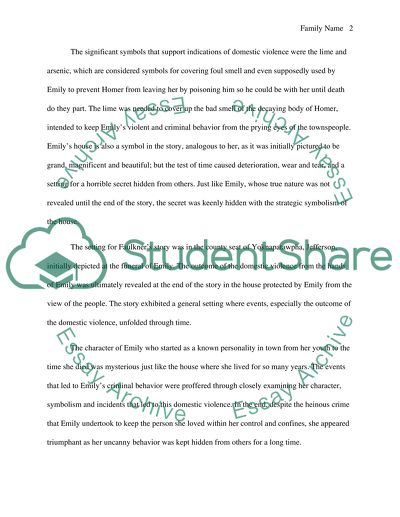 Domestic Violence: Literary Analysis of A Rose for Emily The short story written by Faulkner manifests aspects ofdomestic violence in terms of the behavior exhibited by the main character, Emily, towards her potential partner, Homer Barron. The intricate issue of domestic violence is exhibited when one person in a relationship behaves in a way that exhibits a form of control towards the other person. Emily is guilty of manifesting behavior that led to her criminal action of killing Homer Baron, to prevent him from leaving her. Baron was found dead with his skeletal remains on the bed of a locked room in Emily’s house, hidden from everyone else, and kept to her until the day she died. The events that led to Emily’s criminal behavior would be proffered to closely examine characterization, symbolism and incidents that led to this domestic violence. Emily Grierson, is the main character in Faulkner’s short story and was depicted as a round character, whose traits were developed and expounded through the story. As the lead character, Emily is the protagonist, while the rest of the characters in the story are basically flat characters whose personalities were merely outlines or simple descriptions needed to build the main character. These supporting characters are Tobe, Emily’s servant; Emily’s father; Homer Barron, the person Emily loved; and the townspeople. It could be deduced that Homer Barron, an antagonist, who was supposed to have initially left her, was eventually controlled by Emily and prevented to leave the house through drastic means. The significant symbols that support indications of domestic violence were the lime and arsenic, which are considered symbols for covering foul smell and even supposedly used by Emily to prevent Homer from leaving her by poisoning him so he could be with her until death do they part. The lime was needed to cover up the bad smell of the decaying body of Homer, intended to keep Emily’s violent and criminal behavior from the prying eyes of the townspeople. Emily’s house is also a symbol in the story, analogous to her, as it was initially pictured to be grand, magnificent and beautiful; but the test of time caused deterioration, wear and tear, and a setting for a horrible secret hidden from others. Just like Emily, whose true nature was not revealed until the end of the story, the secret was keenly hidden with the strategic symbolism of the house. The setting for Faulkner’s story was in the county seat of Yoknapatawpha, Jefferson, initially depicted at the funeral of Emily. The outcome of the domestic violence from the hands of Emily was ultimately revealed at the end of the story in the house protected by Emily from the view of the people. The story exhibited a general setting where events, especially the outcome of the domestic violence, unfolded through time. The character of Emily who started as a known personality in town from her youth to the time she died was mysterious just like the house where she lived for so many years. The events that led to Emily’s criminal behavior were proffered through closely examining her character, symbolism and incidents that led to this domestic violence. In the end, despite the heinous crime that Emily undertook to keep the person she loved within her control and confines, she appeared triumphant as her uncanny behavior was kept hidden from others for a long time. Work Cited Faulkner, William. “A Rose for Emily.” Sourced from Gwynn, R.S. Literature: A Pocket Anthology. Longman. Pp. 139 – 148. 2008. Print. Read More
Share:
Tags
Cite this document
(“Domestic Violence- literary analysis of A Rose for Emily Essay”, n.d.)
Retrieved from https://studentshare.org/literature/1415200-domestic-violence-literary-analysis-of-a-rose-for
(Domestic Violence- Literary Analysis of A Rose for Emily Essay)
https://studentshare.org/literature/1415200-domestic-violence-literary-analysis-of-a-rose-for.
“Domestic Violence- Literary Analysis of A Rose for Emily Essay”, n.d. https://studentshare.org/literature/1415200-domestic-violence-literary-analysis-of-a-rose-for.
Comments (0)
Click to create a comment or rate a document

The idea that masculinity is synonymous with power transcends the times.5 At least from a purely feminist perspective power over women and children has always been essential for maintaining the gender gap in which men are superior to women.6 Anthony Whitehead writes that:
This concept of masculinity goes back to Victorian times and rapidly developed into an ideology that recognized “unity and power of men over women” as the hierarchal structure within “patriarchal social relations.”8
Masculinity and manhood encapsulate an ideology that goes beyond other characteristics of identity such as race, class, and sexuality.9 Heroism, for instance, is aligned to masculinity. The hero has been portrayed thr...
12 Pages(3000 words)Assignment

In th...
8 Pages(2000 words)Case Study
sponsored ads
Save Your Time for More Important Things
Let us write or edit the essay on your topic "Domestic Violence- literary analysis of A Rose for Emily" with a personal 20% discount.
GRAB THE BEST PAPER

Let us find you another Essay on topic Domestic Violence- literary analysis of A Rose for Emily for FREE!