Man and Nature in The Loons - Essay Example

Comments (0)
Add to wishlistDelete from wishlist
Cite this document
Summary
The story “The Loons” by Margret Laurence is able to establish cultural convergence and ecological ethics, which ought to be maintained in society. The aim of this short essay is to analyze the theme of change and struggle endured men and nature depicted in the story "The Loons"…
Download free paperFile format: .doc, available for editing
HIDE THIS PAPERGRAB THE BEST PAPER97.8% of users find it useful 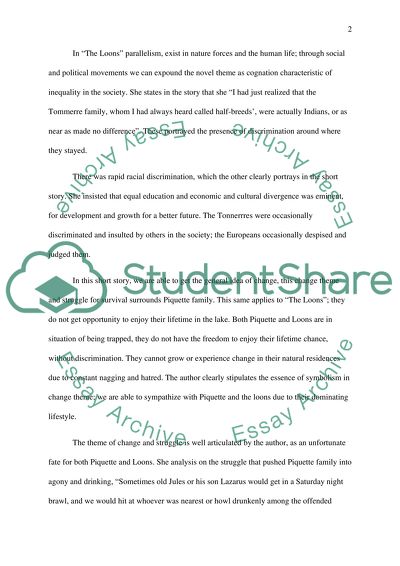 Extract of sample "Man and Nature in The Loons"

“The loons” by Margret Laurence’s
In the analyses of this short story, I will give details on, the general history of the author and the basic contents of the theme analysis of the story. Margaret Laurence was a Canadian writer who was famous in oral literature. She wrote a short story by the name “The loons” that reflected on the ethical and ecological conflicts that was prevalent in humans and the environment, she criticized the ideological differences and similarities that surrounded nature and humans. She advocated for equality between women and men in the context of classes and races. In this short story, we deal generally with the ethics modulation and ecological maintenance in society.

“The Loons” stipulates on humans conquest for equality and gives major analysis on, an eco-feminist theme that develops in the story profile. This mostly entails on oppression and women's subordination in society and specifically in the families. It also continues to stipulate on nature degradation through ideological indifferences. Margaret was more evidential in portraying the subject domination by the higher-ranked personnel or individuals to those who were not capable of many productions or those who were in the lower categories. This sums up the element of eco-feminist which analysis feminism associated with environmentalism.
In “The Loons” parallelism, exist in natural forces and human life; through social and political movements we can expound the novel theme as cognition characteristic of inequality in the society. She states in the story that she “I had just realized that the Tommerre family, whom I had always heard called half-breeds’, were actually Indians, or as near as made no difference”. These portrayed the presence of discrimination around where they stayed.
There was rapid racial discrimination, which the other clearly portrays in the short story. She insisted that equal education and economic and cultural divergence was eminent, for development and growth for a better future. The Tonnerrres were occasionally discriminated against and insulted by others in the society; the Europeans occasionally despised and judged them.
In this short story, we are able to get the general idea of change, this change theme and struggle for survival surrounds the Piquette family. This same applies to “The Loons”; they do not get the opportunity to enjoy their life in the lake. Both Piquette and Loons are in the situation of being trapped, they do not have the freedom to enjoy their lifetime chance, without discrimination. They cannot grow or experience a change in their natural residences due to constant nagging and hatred. The author clearly stipulates the essence of symbolism in the change theme; we are able to sympathize with Piquette and the loons due to their dominating lifestyle.

The theme of change and struggle is well articulated by the author, as an unfortunate fate for both Piquette and Loons. She analysis the struggle that pushed Piquette family into agony and drinking, “Sometimes old Jules or his son Lazarus would get in a Saturday night brawl, and we would hit at whoever was nearest or howl drunkenly among the offended shoppers of the main street." The loons also and similar fate as they tried to live under the harsh condition created by tourists, in the long run, they have driven away. There was hopelessness to both parties, as they became sacrificial lambs due to the serious challenges of culture to Piquette family and the ecological displacement for the Loons.

CHECK THESE SAMPLES OF Man and Nature in The Loons

Analysis of Richard Wright's The Man Who Lived Underground

The protagonist of this story, Fred Daniels, is accused of a murder that he did not commit and, therefore, is forced to inhabit the underworld, where he does not want to live. This is highly symbolic of how African Americans have been treated in society throughout history, as they have been forced out of the conscience of the country as a whole and pushed into ghettos where their stereotypes continue to evolve. Daniels is the personification of Wright’s ideas on American society and its attitudes towards American Americans in general. The fact that he is forced to run underground because of the charges against him shows that he does not believe that he will be given a fair trial. He knows that his only chance for survival is...
6 Pages(1500 words)Book Report/Review

Franklin Roosevelt as a Man and Politician

Roosevelt defeated Herbert Hoover in 1932, Alfred M. Landon in 1936, Wendell Wilkie in 1940, and Thomas E. Dewey in 1944. Roosevelt carried all except two states in the massive victory of 1936. The 1940 Presidential election was fought with the war in the backdrop. Wendall Wilkie, an arch opponent of Roosevelt in the Democratic Party, switched sides to join the Republican Party. Despite his deteriorating health, Roosevelt defeated Governor John E. Dewey of New York by securing 25 million votes against 22 million in the 1944 elections. No other President has contested and won the elections on more than two occasions. He was the fifth cousin of, his ideal, the ‘turn of the century’ President Theodore Roosevelt. He died i...
9 Pages(2250 words)Term Paper

The storms may be dust or the sand, hail and the thunder but they cause destruction and result in a total shutdown of business due to damage to the buildings.
Torrential rainfall can also add to an economic crisis and huge losses for rain also affects the buildings especially the acid rain (Wallace, Alfred Russel, 1889). This type of rain is corrosive in nature which results in deteriorating structures and a lot of costs are required for the maintenance (J. S. 0guntoyinbo and F. 0. Akintola, 1983). The acid rainfall causes the structure to degrade which results in increased requirements not only of cost but also increased manpower. Nowadays, we see such problems occur in places where the countries are very industrialize...
7 Pages(1750 words)Case Study
sponsored ads
Save Your Time for More Important Things
Let us write or edit the essay on your topic "Man and Nature in The Loons" with a personal 20% discount.
GRAB THE BEST PAPER

Let us find you another Essay on topic Man and Nature in The Loons for FREE!