Comments (0)
Add to wishlistDelete from wishlist
Cite this document
Summary
The debate on the role of narrator became pronounced at the beginning of twentieth century. The prominent icons behind the debate were Percy Lubbock and Henry James. They describe narrative as a powerful way of telling stories. Characteristics of these narratives are featured on its presentation. …
Download full paperFile format: .doc, available for editing
HIDE THIS PAPERGRAB THE BEST PAPER91.7% of users find it useful 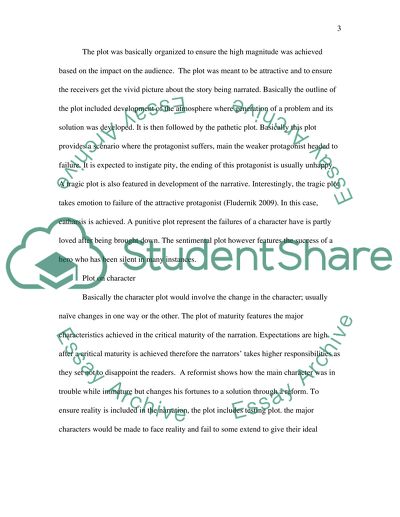 Extract of sample "Critical Perspectives for Literature, Criticism and Culture"

Download file to see previous pages Narration analysis in the pre-structural period was behind the famous contributors such as Wayne Booth Edgar Morgan among others (Kunstverlag 2009). Analyzing Narratives is particularly suitable for the structuralist or to some extend semiotic analyses. Basically some consideration of notions and the rhythm qualifies it to be considered in a systematic analysis.
Pre-structural narrative
The plot in the narratives is commonly used by the narrators to express styles such as suspense. The Russian contributor (Sjuzet) and the English novelist differed in the style of narration. The English novelist (Forster) was famously known for his narration basically based on the chronological order. Suspense was particularly the most common expression in narratives. It was commonly used by the narrators as survival tactics (Kunstverlag 2009). Norman Friedman came up with a topology of organizing a plot. His topology was detailed on how a plot would be conducted where the participation of the characters was paramount.
The plot was basically organized to ensure the high magnitude was achieved based on the impact on the audience. The plot was meant to be attractive and to ensure the receivers get the vivid picture about the story being narrated. Basically the outline of the plot included development of the atmosphere where generation of a problem and its solution was developed. It is then followed by the pathetic plot. Basically this plot provides a scenario where the protagonist suffers, main the weaker protagonist headed to failure. It is expected to instigate pity, the ending of this protagonist is usually unhappy. A tragic plot is also featured in development of the narrative. Interestingly, the tragic plot takes emotion to failure of the attractive protagonist (Fludernik 2009). In this case, catharsis is achieved. A punitive plot represent the failures of a character have is partly loved after being brought down. The sentimental plot however features the success of a hero who has been silent in many instances. Plot on character Basically the character plot would involve the change in the character; usually naive changes in one way or the other. The plot of maturity features the major characteristics achieved in the critical maturity of the narration. Expectations are high after a critical maturity is achieved therefore the narrators’ takes higher responsibilities as they set not to disappoint the readers. A reformist shows how the main character was in trouble while immature but changes his fortunes to a solution through a reform. To ensure reality is included in the narration, the plot includes testing plot. the major characters would be made to face reality and fail to some extend to give their ideal characteristics and take the normal mood of a typical human being. After some crisis, more trouble headed to the major protagonist (through plot degeneration). Plots of thoughts Thoughts in a narration determine the course of the protagonist. It changes protagonists in thoughts thus major character feel the responsibility of ensuring theme is understood. A relevance plot is drafted to display that the major character indeed complied with the feelings developed. When the disillusionment occurs, the protagonist faces an up hill task of convincing the receivers that the behavior can be justified. A negative attitude on the features however the fate may have ...Download file to see next pagesRead More
Share:
Tags
Cite this document
(“Critical Perspectives for Literature, Criticism and Culture Essay”, n.d.)
Retrieved from https://studentshare.org/literature/1398132-critical-perspectives-for-literature-criticism-and-culture

“Critical Perspectives for Literature, Criticism and Culture Essay”, n.d. https://studentshare.org/literature/1398132-critical-perspectives-for-literature-criticism-and-culture.
Comments (0)
Click to create a comment or rate a document

CHECK THESE SAMPLES OF Critical Perspectives for Literature, Criticism and Culture

The Goth subculture is founded on principles of viewing some of what society outside this subculture, or mainstream culture, views as abhorrent or negative. There is some fetish tendency in this subculture towards the macabre and death, with face-paint style makeup and mourning clothing being prominent features of belongingness, which are certainly not reflective of mainstream fashion and makeup....
6 Pages(1500 words)Book Report/Review
sponsored ads
Save Your Time for More Important Things
Let us write or edit the essay on your topic "Critical Perspectives for Literature, Criticism and Culture" with a personal 20% discount.
GRAB THE BEST PAPER

Let us find you another Essay on topic Critical Perspectives for Literature, Criticism and Culture for FREE!