The Genius of Luther's Theology: A Wittenberg Way of Thinking for the Contemporary Church by Robert Kolb and Charles P. Arand - Book Report/Review Example

Comments (0)
Add to wishlistDelete from wishlist
Cite this document
Summary
The object of analysis for the purpose of this assignment is the book “The Genius of Luther's Theology: A Wittenberg Way of Thinking for the Contemporary Church” as a result of teamwork and is written by Robert Kolb and Charles P. Arand. …
Download full paperFile format: .doc, available for editing
HIDE THIS PAPERGRAB THE BEST PAPER94.3% of users find it useful 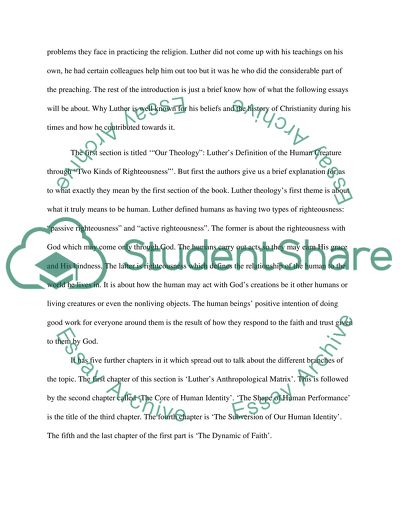 Extract of sample "The Genius of Luther's Theology: A Wittenberg Way of Thinking for the Contemporary Church by Robert Kolb and Charles P. Arand"

Download file to see previous pages The paper tells that in the introduction of the book observed, they start off talking about the several books which have been written over the man and why he is considered to be so popular in the history of Christianity. How – even today – his message is important to bring the people close to their religion. They mention the Luther’s theology - how Luther understood the message of the Bible. This has been divided into two parts, both of them about the two themes in his theology. The first one is about what Luther’s thoughts were on being a human and the second part is on how he understood God to work in the world he lived in. Next, they connect Luther’s thoughts to the life today. Of how they can help out the Christians living right now with understanding the religion, with whatever problems they face in practicing the religion. Luther did not come up with his teachings on his own, he had certain colleagues help him out too but it was he who did the considerable part of the preaching. The rest of the introduction is just a brief know how of what the following essays will be about. Why Luther is well known for his beliefs and the history of Christianity during his times and how he contributed towards it. The first section is titled ‘“Our Theology”: Luther’s Definition of the Human Creature through “Two Kinds of Righteousness”’. But first the authors give us a brief explanation for as to what exactly they mean by the first section of the book. Luther theology’s first theme is about what it truly means to be human. Luther defined humans as having two types of righteousness: “passive righteousness” and “active righteousness”. The former is about the righteousness with God which may come only through God. The humans carry out acts so they may earn His grace and His kindness. The latter is righteousness which defines the relationship of the human to the world he lives in. It is about how the human may act with God’s creations be it other humans or living creatures or even the nonliving objects. The human beings’ positive intention of doing good work for everyone around them is the result of how they respond to the faith and trust given to them by God. It has five further chapters in it which spread out to talk about the different branches of the topic. The first chapter of this section is ‘Luther’s Anthropological Matrix’. This is followed by the second chapter called ‘The Core of Human Identity’. ‘The Shape of Human Performance’ is the title of the third chapter. The fourth chapter is ‘The Subversion of Our Human Identity’. The fifth and the last chapter of the first part is ‘The Dynamic of Faith’. The first part starts off with how over the times, human beings have experienced various things. How they have lived their lives through different kinds of circumstances. The situations and how they respond to them are different depending on the positions and the person himself. Everyone reacts to different things depending on ...Download file to see next pagesRead More
Share:
Tags
Cite this document
(“The Genius of Luther's Theology: A Wittenberg Way of Thinking for the Book Report/Review”, n.d.)
Retrieved from https://studentshare.org/literature/1395569-the-genius-of-luthers-theology-a-wittenberg-way-of-thinking-for-the-contemporary-church-by-robert-kolb-and-charles-p-arand
(The Genius of Luther'S Theology: A Wittenberg Way of Thinking for the Book Report/Review)
https://studentshare.org/literature/1395569-the-genius-of-luthers-theology-a-wittenberg-way-of-thinking-for-the-contemporary-church-by-robert-kolb-and-charles-p-arand.
“The Genius of Luther'S Theology: A Wittenberg Way of Thinking for the Book Report/Review”, n.d. https://studentshare.org/literature/1395569-the-genius-of-luthers-theology-a-wittenberg-way-of-thinking-for-the-contemporary-church-by-robert-kolb-and-charles-p-arand.
Comments (0)
Click to create a comment or rate a document

CHECK THESE SAMPLES OF The Genius of Luther's Theology: A Wittenberg Way of Thinking for the Contemporary Church by Robert Kolb and Charles P. Arand

Especially in these Modern times, being a leader is by no means an easy task. It calls for a lot of sacrifices and hard work because the youth of today are not the youth of a few centuries ago. Human beings are like institutions that undergo various changes throughout their lifespan. In the beginning, they are filled with vigor and vitality, but over a period of time, due to lack of proper guidance or laxity on the part of its leaders, monotony sets in and one loses their interest. Hence one of the vital...
6 Pages(1500 words)Thesis

According to the American dream, everyone is equal despite his or her gender while pursuing the dream. Majority of Americans interpret it as the attainment of wealth; the dream embodies the attainment of materialistic goals. However, others view the dream as more than the achievement of material wealth. Furthermore, the American dream depicts America as the country full of opportunities (Bloom & Blake 5).
Over the years, Americans have perceived the American dream differently. The dream has changed significantly since the days of the founding fathers. First, it promised Americans equal opportunities then it became the achievement of material wealth (Kochan 3). F. Scott Fitzgerald illustrates the American Dream aptly in hi...
11 Pages(2750 words)Literature review
sponsored ads
Save Your Time for More Important Things
Let us write or edit the book report/review on your topic "The Genius of Luther's Theology: A Wittenberg Way of Thinking for the Contemporary Church by Robert Kolb and Charles P. Arand" with a personal 20% discount.
GRAB THE BEST PAPER

Let us find you another Book Report/Review on topic The Genius of Luther's Theology: A Wittenberg Way of Thinking for the Contemporary Church by Robert Kolb and Charles P. Arand for FREE!