Comments (0)
Add to wishlistDelete from wishlist
Cite this document
Summary
The gender discrimination in Australia has been one of the major problems faced by the nation and to eradicate it the Australian government along with the states has formulated laws to spread equality among all the section of people in the country…
Download full paperFile format: .doc, available for editing
HIDE THIS PAPERGRAB THE BEST PAPER96.8% of users find it useful 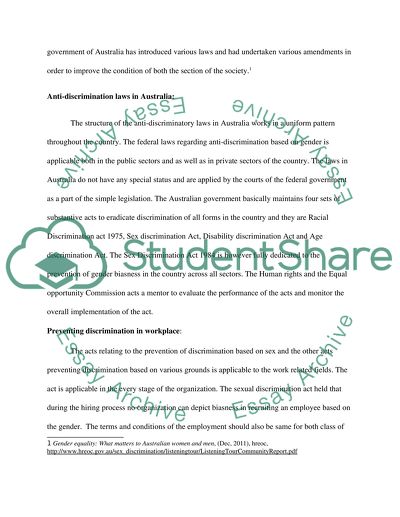 Download file to see previous pages Australian society and evidence of discrimination: Gender inequality is a matter of regular experience in Australia. The overall condition of women in Australia is a serious matter of concern as they had to repeatedly face barriers in the advancement of their careers and regarding their participation in the workforce. The women community in Australia has exhibited underrepresentation in the positions of senior leaderships. The interest of men has also taken a setback as they find it difficult to balance the responsibility of the work and the family. The increase in work pressure and absence of any legislation promoting their needs makes it difficult for them to share time with their families. Women regularly have to encounter matters of violence and harassment and have a huge impact affecting their ability to get involved in paid work which seriously curtails their economic independence. The barriers in the overall structure and the culture, prevalent in the workplace are one of the serious reasons for the discrimination which both men and women have to suffer. The sexual harassment of both the sections of men and women in every part of the society also is an example of gender discrimination in Australia. Because of all these social problems, the government of Australia has introduced various laws and had undertaken various amendments in order to improve the condition of both the section of the society.
Anti-discrimination laws in Australia:
The structure of the anti-discriminatory laws in Australia works in a uniform pattern throughout the country. The federal laws regarding anti-discrimination based on gender is applicable both in the public sectors and as well as in private sectors of the country. ...
The laws in Australia do not have any special status and are applied by the courts of the federal government as a part of the simple legislation. The Australian government basically maintains four sets of substantive acts to eradicate discrimination of all forms in the country and they are Racial Discrimination act 1975, Sex discrimination Act, Disability discrimination Act and Age discrimination Act. The Sex Discrimination Act 1984 is however fully dedicated to the prevention of gender biasness in the country across all sectors. The Human rights and the Equal opportunity Commission acts a mentor to evaluate the performance of the acts and monitor the overall implementation of the act. Preventing discrimination in workplace: The acts relating to the prevention of discrimination based on sex and the other acts preventing discrimination based on various grounds is applicable to the work related fields. The act is applicable in the every stage of the organization. The sexual discrimination act held that during the hiring process no organization can depict biasness in recruiting an employee based on the gender. The terms and conditions of the employment should also be same for both class of genders and no exceptions or special privileges are to be provided based on the gender. The employees also cannot be terminated based on their genders. The laws prevent any form of discrimination in the workplace whether direct or indirect and try to provide justice to the victims of such acts. In spite of the presence of such acts in the Australia, the laws relating to the prevention of sexual discrimination suffer from variety of limitation. Though the laws are implemented but there is the absence of the process to identify cases of discrimination and eliminate such acts form the ...Download file to see next pagesRead More
Share:
Tags
Cite this document
(“Gender and Australian Law Essay Example | Topics and Well Written Essays - 1750 words”, n.d.)
Retrieved from https://studentshare.org/literature/1394109-research-assignment

CHECK THESE SAMPLES OF Gender and Australian Law

In th...
8 Pages(2000 words)Case Study
sponsored ads
Save Your Time for More Important Things
Let us write or edit the essay on your topic "Gender and Australian Law" with a personal 20% discount.
GRAB THE BEST PAPER

Let us find you another Essay on topic Gender and Australian Law for FREE!