Situation of Human Rights in the UK in the Presence of Anti: Terrorism and other Privacy Invading Regulations - Dissertation Example

Comments (0)
Add to wishlistDelete from wishlist
Cite this document
Summary
The purpose of the "Situation of Human Rights in the UK in the Presence of Anti- Terrorism and other Privacy Invading Regulations" paper is to analyze the various laws on anti-terrorism and their effects on other laws safeguarding human rights, some of which are the Convention on Human Rights…
Download full paperFile format: .doc, available for editing
HIDE THIS PAPERGRAB THE BEST PAPER94.7% of users find it useful 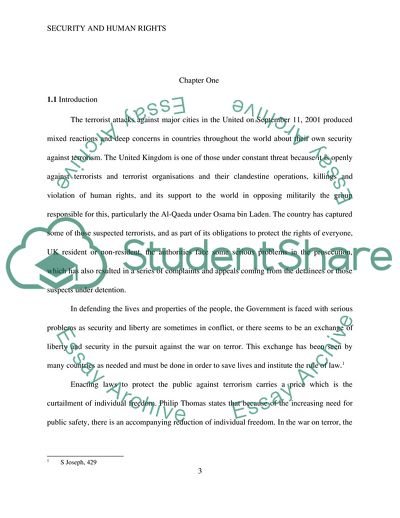 Extract of sample "Situation of Human Rights in the UK in the Presence of Anti: Terrorism and other Privacy Invading Regulations"

Download file to see previous pages The country has captured some of those suspected terrorists, and as part of its obligations to protect the rights of everyone, UK resident or non-resident, the authorities face some serious problems in the prosecution, which has also resulted in a series of complaints and appeals coming from the detainees or those suspects under detention.

In defending the lives and properties of the people, the Government is faced with serious problems as security and liberty are sometimes in conflict, or there seems to be an exchange of liberty and security in the pursuit of the war on terror. This exchange has been seen by many countries as needed and must be done in order to save lives and institute the rule of law.

CHECK THESE SAMPLES OF Situation of Human Rights in the UK in the Presence of Anti: Terrorism and other Privacy Invading Regulations

... in order to protect the privacy of the people. According to the new changes to the code of privacy, it became important to identify that every individual comes under obligation to respect for the privacy of others. Moreover, the captured images of people without their consent or from constant tracking down came under prohibition for publishing that do not meet the standards of the code. In addition, few other clauses also became a part of the privacy code (Sanders, pp. 81-85, 2003). The records and statistics provide with evidence that the modern Human Rights Act of UK that came under designing in the latter years of the decade 1990 have tabulated the two contradictory and disagreeing rights of free expression and privacy. In addition...
10 Pages(2500 words)Essay

As contemporary issue for the purpose of this foreign policy brief, terrorism refers "to any violent act directed against noncombatants and carried out by an organized group rationalizing such behavior with political and religious arguments."(Davidson, 20 April 2009)
Terrorism is the issue on every one's mind these days. It is global disorder that we have been fighting, and probably will be fighting for many years to come. What is terrorism The word refers different things to different people at different times and the same is very evident. "Violent activity at one point in time may be called terrorism, while the same action may be deemed war, liberation, or crime at another time in history." (Chossudovsky, 24 April 2009)

What human rights commission emphasise upon is to maintain peacekeeping and peacemaking in a political context, this is usually done by military as counter-terrorist and counter-insurgency operations. Since political nature of such operations have their own demands that deviate from those of human rights, in which every officer, non-commissioned, and soldier involved is well aware that even the most minor action by the military may carry with it major political consequences. What these operations have in difference with human rights is the close political scrutiny and control, and therefore, they require intimate civil, military, and police cooperation at all times. Human rights negate the use of military means i.e., firepower, m...
8 Pages(2000 words)Essay

...'Despite the Human Rights Act 1998, the courts have failed appropriately to limit the scope for the exercise of breach of the peace powers.' The Human Rights Act 1998 received royal assent on November 9, 1998 and came into force on October 2, 2000. The objective of said Act was to harmonize the domestic law of the United Kingdom with the European Convention on Human Rights. To reaffirm the commitment of the UK to human rights and civil liberties, it is now possible under the said Act to file a claim for violation of the ECHR without going to the European Court of Human Rights in Strasbourg. Says Weinstein1: This ability to transcend national law, and to compel revision of such law to comport with rights guaranteed by the European...
12 Pages(3000 words)Essay

..., war measures or state-of-siege measures.” Hence the provisions like hiding evidences from the defendant and secret trials on the part of the Government are decriminalized and put to force. Critics of the Act state that it does not adhere to the Canadian values of secularism and upholding rights. Moreover, it actually violates human rights. Conclusion The critics of the Canadian Anti-Terrorism Act are not completely correct, particularly after the recent decision by the Canadian House of Commons. In 2001, in response to the 9/11 Terror Attacks, the provisions of the Act were extremely crucial and somewhat necessary. But in 2007, the House of Commons decided to withdraw many of those provisions in the view of the popular demand. Therefore...
5 Pages(1250 words)Essay

... of the of the Concerned English 27 February Marketers Invading Privacy The article How Companies Learn Your Secrets, published in The New York Times is revealing and positively shocking in the sense that it indicates the dawn of an era where the privacy of the customers is open to the invasiveness of the marketers interested in taking advantage of their habit patterns to influence their purchasing habits. If a shopkeeper intends to peep into the choices and preferences of one’s customers to serve them better, it is to a great extent understandable. Ultimately business is about fulfilling the needs of the customers and how can one expect a seller to fulfill the needs of one’s customers, unless one has a pragmatic insight... of the of the...
1 Pages(250 words)Essay

The rights contained within the law are based on European Convention on Human Rights articles. It also gives further effects to freedom and rights that are guaranteed under the European Convention. This means that judges must study and give effect to the legislation in a way that is compatible with the convention rights. It also implicates unlawfulness for a public authority to act in an incompatible way with the conventional right. The Human Rights Act protects; the right of life, the prohibition of torture and inhumane treatment, protection against forced labor and slavery, the right for freedom and liberty, the right for fair trial and no punishment without law and freedom of thought belief and religion. The act also gives resp...
10 Pages(2500 words)Essay

This paper examines four articles that discuss the issue of social networking and invasion of privacy as a relevant issue today.
In his article that appeared in the American Quarterly in 1999, Rosenzweig argued that the digital revolution and the rise of the information superhighway has big implications on how people lived and worked. His article is actually a summary of four books describing the reactions of people at various times how technology will impact their lives. There were a lot of conflicting visions about what will happen with one side claiming a new utopia where people will be able to re-organize society and establish a new kinship of humanity by bringing people closer together (Rosenzweig 160) while critics feare...
5 Pages(1250 words)Essay
sponsored ads
Save Your Time for More Important Things
Let us write or edit the dissertation on your topic "Situation of Human Rights in the UK in the Presence of Anti: Terrorism and other Privacy Invading Regulations" with a personal 20% discount.
GRAB THE BEST PAPER

Let us find you another Dissertation on topic Situation of Human Rights in the UK in the Presence of Anti: Terrorism and other Privacy Invading Regulations for FREE!