Comments (0)
Add to wishlist Delete from wishlist
Cite this document
Summary
LAND LAW II Question 1: “ In Street V Mountford (1985) AC 809 Lord Templeman pointed out that while, by definition, a tenant must have exclusive possession, an occupier who enjoys exclusive possession “is not necessarily a tenant” . Gray & Grey, Elements of Land Law, 5th edn, 2009, Oxford University Press, p.341 A refusal to distinguish lease from licence comes with so much trouble for tenants and landlords in the resolution of common land litigation issues…
Download full paper File format: .doc, available for editing
HIDE THIS PAPERGRAB THE BEST PAPER93.9% of users find it useful 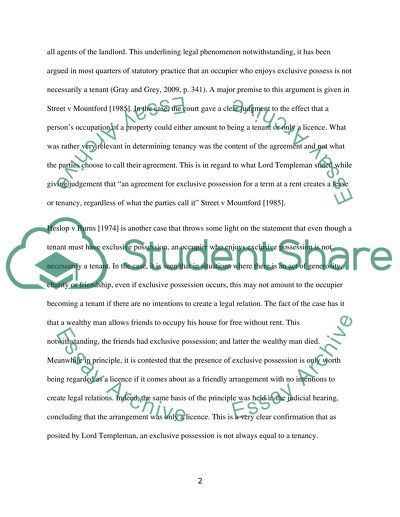 Download file to see previous pages These exceptions include: (a) An act of generosity (Helsop v Burns, which you already mentioned it) (b)Service Occupancy (Crane v Morris) (c) Occupancy by virtue of office (d) Occypancy prior to completion of contract of sale Indeed, by definition, the very first requirement for a lease is exclusive possession. Without an exclusive possession, there is no way a lease can be finalized. This is so because the exclusive possession taken by the person taking the lease, and hereby known as the tenant gives that person the right to exclude all people from the property in question. Such exclusion does not only involve third parties and people outside the transfer transaction but also includes the landlord and all agents of the landlord. This underlining legal phenomenon notwithstanding, it has been argued in most quarters of statutory practice that an occupier who enjoys exclusive possess is not necessarily a tenant (Gray and Grey, 2009, p. 341). A major premise to this argument is given in Street v Mountford [1985]. In the case, the court gave a clear judgment to the effect that a person’s occupation of a property could either amount to being a tenant or only a licence. What was rather very relevant in determining tenancy was the content of the agreement and not what the parties choose to call their agreement. This is in regard to what Lord Templeman stated while giving judgement that “an agreement for exclusive possession for a term at a rent creates a lease or tenancy, regardless of what the parties call it” Street v Mountford [1985]. Heslop v Burns [1974] is another case that throws some light on the statement that even though a tenant must have exclusive possession, an occupier who enjoys exclusive possession is not necessarily a tenant. In the case, it is seen that in situations where there is an act of generosity, charity or friendship, even if exclusive possession occurs, this may not amount to the occupier becoming a tenant if there are no intentions to create a legal relation. The fact of the case has it that a wealthy man allows friends to occupy his house for free without rent. This notwithstanding, the friends had exclusive possession; and latter the wealthy man died. Meanwhile in principle, it is contested that the presence of exclusive possession is only worth being regarded as a licence if it comes about as a friendly arrangement with no intentions to create legal relations. Indeed, the same basis of the principle was held in the judicial hearing, concluding that the arrangement was only a licence. This is a very clear confirmation that as posited by Lord Templeman, an exclusive possession is not always equal to a tenancy. In another case, of Rhodes v Dalby [1971], a premise is given to the effect that a person may have occupancy with exclusive possession but may not necessarily be a tenant. The fact of that case has it that a man who was travelling abroad asked a friend to live in his bungalow whiles he was away. Between the two parties, what existed was a “gentleman’s agreement”, ordering the friend to be taking care of the property and keeping it in shape. In the situation, and in situation of this nature, because the owner of the property leaves the property ...Download file to see next pages Read More
Share:
Tags
Cite this document
(“LAND LAW II Essay Example | Topics and Well Written Essays - 2750 words”, n.d.)
LAND LAW II Essay Example | Topics and Well Written Essays - 2750 words. Retrieved from https://studentshare.org/law/1479664-land-law-ii

New and complex issues have arisen which demanded fresh understanding and handling of cases involved them. This has resulted in the enhanced development of specialized laws e.g. cyber laws and interpretation of those laws. The same is true with Media Laws. Media has developed much in the last half-century. As it evolved as a profession and more people started to join it, there arose the levels of money involved in it. With this grew the contractual obligations on the parts of parties and concerned laws e.g. patent laws, privacy laws, and copyrights laws, etc. also started to play their parts. With these issues, the role of law in the media industry also reached a new height.
Mathew Fisher, the appellant, joined a band with Mr...
6 Pages (1500 words) Assignment
sponsored ads
Save Your Time for More Important Things
Let us write or edit the essay on your topic "LAND LAW II" with a personal 20% discount.
GRAB THE BEST PAPER

Let us find you another Essay on topic LAND LAW II for FREE!