Comments (0)
Add to wishlistDelete from wishlist
Cite this document
Summary
Name Date Professor April 19, 2013 Employment Law Case Study 1 Employers are by law allowed to terminate any form of employment by giving appropriate notice period of the intention to terminate the employment relationship between the employer and the employee…
Download full paperFile format: .doc, available for editing
HIDE THIS PAPERGRAB THE BEST PAPER95.2% of users find it useful 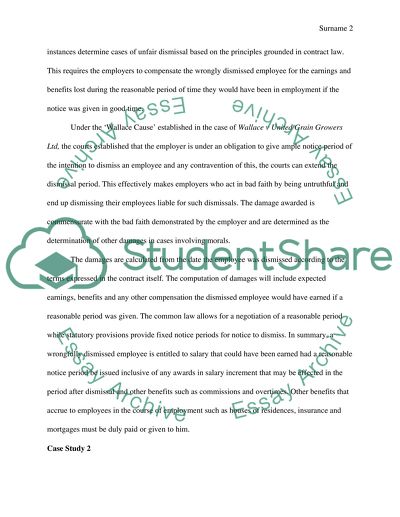 Download file to see previous pages The employer is required to prove just because as a reason for dismissal, which requires him to show proof that the employee has been habitually found to engage in misconduct that eventually resulted in the current dismissal and this may require the tabling of warning letters or specific directives in a court of law. When an employee is dismissed based on ‘Just Cause’ principle, the employer is not obliged to provide notice to the dismissed employee nor is the employee entitled to any pay in lieu of notice. However, certain occasions, the employer may be required to furnish the dismissed employee with reasons for the dismissal. An employee whose service has been terminated through wrongful dismissal may seek remedies through the help of courts of law. Under the common law, such employees can be reinstated to their previous jobs or places of work. As most employment relationships are contractual in nature, the courts of law would most instances determine cases of unfair dismissal based on the principles grounded in contract law. This requires the employers to compensate the wrongly dismissed employee for the earnings and benefits lost during the reasonable period of time they would have been in employment if the notice was given in good time. Under the ‘Wallace Cause’ established in the case of Wallace v United Grain Growers Ltd, the courts established that the employer is under an obligation to give ample notice period of the intention to dismiss an employee and any contravention of this, the courts can extend the dismissal period. This effectively makes employers who act in bad faith by being untruthful and end up dismissing their employees liable for such dismissals. The damage awarded is commensurate with the bad faith demonstrated by the employer and are determined as the determination of other damages in cases involving morals. The damages are calculated from the date the employee was dismissed according to the terms expressed in the contract itself. The computation of damages will include expected earnings, benefits and any other compensation the dismissed employee would have earned if a reasonable period was given. The common law allows for a negotiation of a reasonable period while statutory provisions provide fixed notice periods for notice to dismiss. In summary, a wrongfully dismissed employee is entitled to salary that could have been earned had a reasonable notice period be issued inclusive of any awards in salary increment that may be effected in the period after dismissal and other benefits such as commissions and overtimes. Other benefits that accrue to employees in the course of employment such as houses of residences, insurance and mortgages must be duly paid or given to him. Case Study 2 There are many tests for distinguishing an employee from an independent contractor. It is important to note that all these tests look at the substance or what occurred in such employment relationship rather than what is written in a particular contract. The first and most important test is the level of control that the hiring person has over the performance of the work in terms of place, time and the manner in which it is done. An individual who does not have the control over such aspects is an employee while the vice versa in terms of control refer to an independent contractor. The risk test provides that the independent contractor bears risks that come with the performance o ...Download file to see next pagesRead More
Share:
Tags
Cite this document
(“Employment law Essay Example | Topics and Well Written Essays - 1500 words”, n.d.)
Employment law Essay Example | Topics and Well Written Essays - 1500 words. Retrieved from https://studentshare.org/law/1474845-employment-law
(Employment Law Essay Example | Topics and Well Written Essays - 1500 Words)
Employment Law Essay Example | Topics and Well Written Essays - 1500 Words. https://studentshare.org/law/1474845-employment-law.
“Employment Law Essay Example | Topics and Well Written Essays - 1500 Words”, n.d. https://studentshare.org/law/1474845-employment-law.
Comments (0)
Click to create a comment or rate a document

New and complex issues have arisen which demanded fresh understanding and handling of cases involved them. This has resulted in the enhanced development of specialized laws e.g. cyber laws and interpretation of those laws. The same is true with Media Laws. Media has developed much in the last half-century. As it evolved as a profession and more people started to join it, there arose the levels of money involved in it. With this grew the contractual obligations on the parts of parties and concerned laws e.g. patent laws, privacy laws, and copyrights laws, etc. also started to play their parts. With these issues, the role of law in the media industry also reached a new height.
Mathew Fisher, the appellant, joined a band with Mr...
6 Pages(1500 words)Assignment
sponsored ads
Save Your Time for More Important Things
Let us write or edit the essay on your topic "Employment law" with a personal 20% discount.
GRAB THE BEST PAPER