Comments (0)
Add to wishlistDelete from wishlist
Cite this document
Summary
However, the Equality Act 2010 requires organisations to make appropriate adjustments to the work place, so as to make it suitable for the disabled…
Download full paperFile format: .doc, available for editing
HIDE THIS PAPERGRAB THE BEST PAPER97.4% of users find it useful 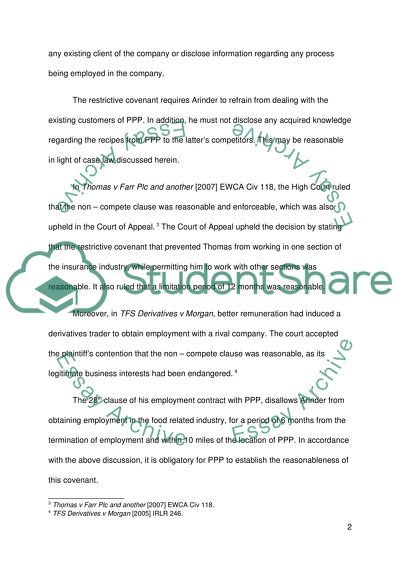 Download file to see previous pages ining employment in the food related industry, for a period of 6 months from the termination of employment and within 10 miles of the location of PPP. In accordance with the above discussion, it is obligatory for PPP to establish the reasonableness of this covenant. Moreover, the geographical restriction depends on the nature of the business and the competition. In some cases, the courts consider a restriction of 7 miles from the ex-employer’s premises as reasonable, whereas a one mile radius clause would be unreasonable in central London. In Allan Janes LLP v Johal,5 a solicitor’s post-termination covenant of 6 miles location, was deemed to be void, by the court, as it was very extensive. Nevertheless, a restrictive covenant for a 12 month period, with respect to an anti – client poaching was deemed to be valid.6 Similarly, a restriction of 10 miles from the location of PPP may be void – since it appears unreasonable. It is argued that the clause restricts the employment opportunities of Arinder, to a major extant. In Hivac Ltd v Park Royal Scientific Instruments Ltd, the court dealt with the use of an item of information by an employee, subsequent to the termination of employment. The court ruled that a covenant in the service contract could not restrict disclosure of such information.7 An employer that believes an employee has breached a restriction relating to the period after termination of employment, may apply for an injunction from the court. Such application will seek an interlocutory injunction and delivery up or destruction of confidential information.8 In this problem, Arinder was instructed by DD to make a product that was similar to that he had prepared for PPP, when he was in their employment. Such act may cause damage to the legitimate business...
This duty imposes three conditions upon the employer. First, if a practice at the workplace places a disabled person at a distinct disadvantage in comparison to individuals who are not disabled, then the employer has to take reasonable steps to avoid that disadvantage. Second, if a physical feature places a disabled person at a considerable disadvantage, with regard to a pertinent issue, in comparison to those who are not disabled, then the employer has to adopt whatever is reasonable to circumvent such disadvantage. Third, if a disabled person would be seriously disadvantaged in a relevant matter, in comparison to persons who are not disabled, in the absence of auxiliary aid. ...Download file to see next pagesRead More
Share:
Tags
Cite this document
(“Employment Law Problem Question Coursework Example | Topics and Well Written Essays - 3250 words”, n.d.)
Retrieved de https://studentshare.org/law/1392364-employment-law-problem-question

In th...
8 Pages(2000 words)Case Study
sponsored ads
Save Your Time for More Important Things
Let us write or edit the coursework on your topic "Employment Law Problem Question" with a personal 20% discount.
GRAB THE BEST PAPER

Let us find you another Coursework on topic Employment Law Problem Question for FREE!