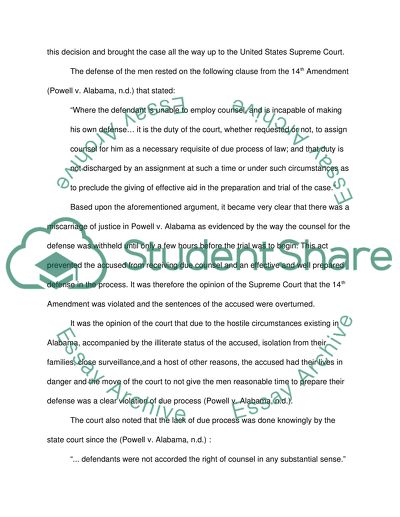 Download file to see previous pages The jury was composed solely of white people who did not represent any interest on the part of the black men. (“Powell v. Alabama (1932)”, n.d.)
The legal representatives of the accused were convinced that their clients were done a disservice by the state courts and decided to appeal their case before the U.S. Supreme Court where they called the validity of the sentences into question based upon the way the case was handled in court. The main issues they wished to have the court resolve (Powell v. Alabama, n.d.) boiled down to the following:
Although the Alabama Supreme Court, where the appeal was first filed, had ruled on a count of 6-1 that the jury trial was fair and impartial, the defense refused to accept this decision and brought the case all the way up to the United States Supreme Court.
“Where the defendant is unable to employ counsel, and is incapable of making his own defense… it is the duty of the court, whether requested or not, to assign counsel for him as a necessary requisite of due process of law; and that duty is not discharged by an assignment at such a time or under such circumstances as to preclude the giving of effective aid in the preparation and trial of the case.”
Based upon the aforementioned argument, it became very clear that there was a miscarriage of justice in Powell v. Alabama as evidenced by the way the counsel for the defense was withheld until only a few hours before the trial was to begin. This act prevented the accused from receiving due counsel and an effective and well prepared defense in the process. It was therefore the opinion of the Supreme Court that the 14th Amendment was violated and the sentences of the accused were overturned.
It was the opinion of the court that due to the hostile circumstances existing in Alabama, accompanied by the illiterate status of the accused, isolation from their families, ...Download file to see next pagesRead More
Share:
Tags
Cite this document
(“The case of Powell v. Alabama (1932) Study Example | Topics and Well Written Essays - 750 words”, n.d.)
Retrieved from https://studentshare.org/law/1468343-the-case-of-powell-v-alabama-1932

CHECK THESE SAMPLES OF The case of Powell v. Alabama (1932)

In this case, the transfer of money across the borders becomes an issue of primary importance for many families internationally (especially when these families are located in developing countries). In practice, it has been found that the transfer of money internationally can present significant failures especially when the firms involved do not take the appropriate measures for the protection of the consumer. However, in the case of workers, such an outcome can lead to severe consequences (the financial support of the family faces a delay within unknown outcomes). In the literature, the transfer of money across the world has been an issue extensively analyzed. Most of the relevant studies prove that the lack of appropriate technol...
37 Pages(9250 words)Assignment

Assuming that the trust held by the trustees under the father’s will trust in favor of Sally and the trust agreement in respect of the horse are valid trusts the question of cetainties are not valid except to the extent that a new trust is created in favor of Sally’s children and thereby extinguishing the previous trusts. This is particularly so with respect to the will trust. The trust agreement over the horse only involves the disposition of a ben...
7 Pages(1750 words)Coursework

As a matter of fact, Hoffman’s statement that “international affairs is the nemesis of liberalism” has a grain of truth in it and this is especially so after the 9/11 incident.
There are two schools of thought or perspectives that are used to view international affairs: liberalism and realism. The study of these two perspectives is significant to the idea posed by Stanley Hoffman because they determine the reasons why international affairs, according to him, does not only see eye-to-eye with liberalism but seems to stand on the opposing side of it.
Liberalism can be defined as having four elements: citizens; the legislature; property rights, and; a market-driven economy (Dunne 186). Realism, on the othe...
6 Pages(1500 words)Assignment
sponsored ads
Save Your Time for More Important Things
Let us write or edit the case study on your topic "The case of Powell v. Alabama (1932)" with a personal 20% discount.
GRAB THE BEST PAPER

Let us find you another Case Study on topic The case of Powell v. Alabama (1932) for FREE!