Comments (0)
Add to wishlistDelete from wishlist
Cite this document
Summary
Essay Question 2: Alice vs Beatrice When Alice deposited 100,000 pounds with Beatrice’s firm and appointed Beatrice to act as her financial advisor in building her investment portfolio, a fiduciary relationship was created. A fiduciary relationship typically arises when one party transfers money to another and confers upon the recipient/holder of the funds discretionary powers to improve and protect the beneficiary’s interest in the funds transferred.1 There was no doubt that Alice intended for Beatrice to protect and advance the funds she transferred to Beatrice…
Download full paperFile format: .doc, available for editing
HIDE THIS PAPERGRAB THE BEST PAPER94.8% of users find it useful 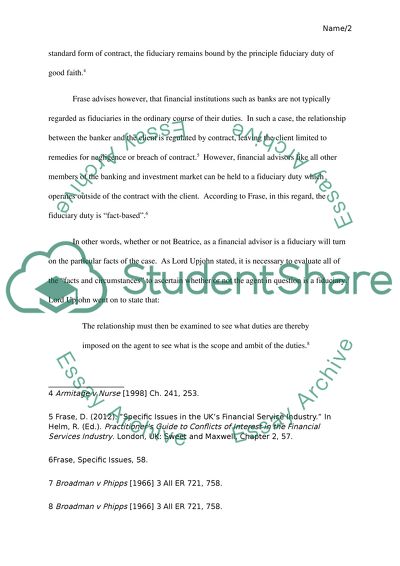 Download file to see previous pages Thus Alice clearly intended to rely on Beatrice’s expertise as a financial advisor. In a typical case, where a fiduciary relationship is created such as the one between Alice and Beatrice, the fiduciary’s (Beatrice) discretion to manage the funds is limited by contract.2 The terms of the contract are not revealed by the facts of the case for discussion. The only know term is stated in broad terms: to build an investment portfolio. Regardless, fiduciary duties are typically provided for in standard contract forms. These duties usually include the no conflict rule, a duty of loyalty, the rule against personal profits and confidentiality rules.3 Despite the fact that the fiduciary duties are typically detailed in the standard form of contract, the fiduciary remains bound by the principle fiduciary duty of good faith.4 Frase advises however, that financial institutions such as banks are not typically regarded as fiduciaries in the ordinary course of their duties. In such a case, the relationship between the banker and the client is regulated by contract, leaving the client limited to remedies for negligence or breach of contract.5 However, financial advisors like all other members of the banking and investment market can be held to a fiduciary duty which operates outside of the contract with the client. According to Frase, in this regard, the fiduciary duty is “fact-based”.6 In other words, whether or not Beatrice, as a financial advisor is a fiduciary will turn on the particular facts of the case. As Lord Upjohn stated, it is necessary to evaluate all of the “facts and circumstances” to ascertain whether or not the agent in question is a fiduciary.7 Lord Upjohn went on to state that: The relationship must then be examined to see what duties are thereby imposed on the agent to see what is the scope and ambit of the duties.8 Lord Wilberforce also stated that the exact nature of the fiduciary’s duties “must be moulded according to the nature of the relationship”.9 Frase explains that where a bank provides the ordinary services of receiving deposits or extending loans, it would not typically have a fiduciary relationship with its clients. However, the moment the bank goes beyond those contracted services, a fiduciary relationship will most often arise. For example in the event the bank or one of its agents, uses confidential information for its own use, a fiduciary duty arises.10 A fiduciary duty will also arise where the bank has a conflict of interest.11 It can be argued that Beatrice made personal use of confidential information connected to Alice’s account. Beatrice knew the details of Alice’s account and while she did not pass their information on to others, she used that information to access Alice’s account. Moreover, there is no doubt that a conflict of interest arose since Beatrice was concerned about her own financial difficulties and desires and put those ahead of her client’s interest: to build an investment portfolio. The definition of a fiduciary as provided by Asquith LJ clearly captures the essence of Beatrice’s relationship with Alice. As Asquith LJ stated, a fiduciary duty ...Download file to see next pagesRead More
Share:
Tags
Cite this document
(“Banking law Essay Example | Topics and Well Written Essays - 2000 words”, n.d.)
Retrieved from https://studentshare.org/law/1463074-banking-law
(Banking Law Essay Example | Topics and Well Written Essays - 2000 Words)
https://studentshare.org/law/1463074-banking-law.
“Banking Law Essay Example | Topics and Well Written Essays - 2000 Words”, n.d. https://studentshare.org/law/1463074-banking-law.
Comments (0)
Click to create a comment or rate a document

CHECK THESE SAMPLES OF Banking law

New and complex issues have arisen which demanded fresh understanding and handling of cases involved them. This has resulted in the enhanced development of specialized laws e.g. cyber laws and interpretation of those laws. The same is true with Media Laws. Media has developed much in the last half-century. As it evolved as a profession and more people started to join it, there arose the levels of money involved in it. With this grew the contractual obligations on the parts of parties and concerned laws e.g. patent laws, privacy laws, and copyrights laws, etc. also started to play their parts. With these issues, the role of law in the media industry also reached a new height.
Mathew Fisher, the appellant, joined a band with Mr...
6 Pages(1500 words)Assignment
sponsored ads
Save Your Time for More Important Things
Let us write or edit the essay on your topic "Banking law" with a personal 20% discount.
GRAB THE BEST PAPER

Let us find you another Essay on topic Banking law for FREE!