Maritime Law: Critically Discuss the Concept of Salvage as Found in the Law of England and Wales - Essay Example

Comments (0)
Add to wishlist Delete from wishlist
Cite this document
Summary
Maritime Law: "Critically discuss the concept of salvage as found in the law of England and Wales" Name: Institution: 1. Introduction In maritime law, the concept of salvage states that an individual who helps in the recovery of another person’s ship after some danger or risk at sea is entitled to a reward to appreciate their efforts according to the value of the property saved…
Download full paper File format: .doc, available for editing
HIDE THIS PAPERGRAB THE BEST PAPER94% of users find it useful 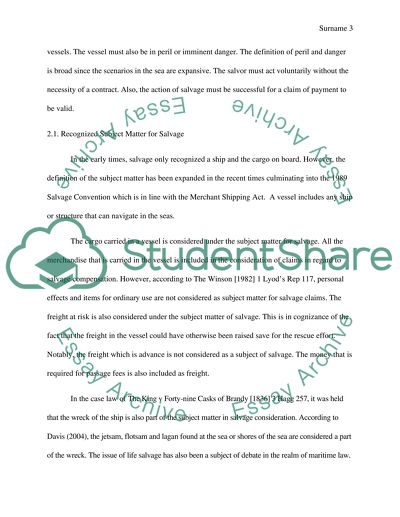 Extract of sample "Maritime Law: Critically Discuss the Concept of Salvage as Found in the Law of England and Wales"

Download file to see previous pages Essentially, the owner of the vessel in peril does not have to authorize the rescue efforts. It is assumed that a prudent owner would accept the salvage terms offered if time and circumstances allowed for negotiations. The right to salvage compensation is a legal liability arising from the fact that a property has been recovered. It is recognized that an individual who voluntarily risks his life and property to successfully rescue another vessel in peril at sea should be appropriately rewarded by the owner of the saved property. The amount of compensation for rescue efforts is not only evaluated to reward the humanitarian efforts but also to encourage marine commerce. Therefore, the amount of reward given is not measured in relation to the labour and time that the salvors provide. In reality, the courts have allowed for liberal rewards even when the little effort has been put in. 2. Conditions required There are basic conditions that must be met for a salvage claim to be valid in the eyes of the law. First, the equipment under salvage must fit in the defined categories of recognized vessels. The vessel must also be in peril or imminent danger. The definition of peril and danger is broad since the scenarios in the sea are expansive. The salvor must act voluntarily without the necessity of a contract. Also, the action of salvage must be successful for a claim of payment to be valid. 2.1. Recognized Subject Matter for Salvage In the early times, salvage only recognized a ship and the cargo on board. However, the definition of the subject matter has been expanded in the recent times culminating into the 1989 Salvage Convention which is in line with the Merchant Shipping Act. A vessel includes any ship or structure that can navigate in the seas. The cargo carried in a vessel is considered under the subject matter for salvage. All the merchandise that is carried in the vessel is included in the consideration of claims in regard to salvage compensation. However, according to The Winson [1982] 1 Lyod’s Rep 117, personal effects and items for ordinary use are not considered as subject matter for salvage claims. The freight at risk is also considered under the subject matter of salvage. This is in cognizance of the fact that the freight in the vessel could have otherwise been raised save for the rescue effort. Notably, the freight which is advance is not considered as a subject of salvage. The money that is required for passage fees is also included as freight. In the case law of The King v Forty-nine Casks of Brandy [1836] 3 Hagg 257, it was held that the wreck of the ship is also part of the subject matter in salvage consideration. According to Davis (2004), the jetsam, flotsam and lagan found at the sea or shores of the sea are considered a part of the wreck. The issue of life salvage has also been a subject of debate in the realm of maritime law. Life salvage is only payable out of the property that is salvaged. For salvage claims to be valid, there must be something saved more than life. Essentially, saving only a life does not warrant a sufficient ground for salvage claims. It should be noted that the protection of the environment is considered as part of salvage. Accordingly, a valuable service that is performed to help the community must be rewarded. 2.2 Real Danger on the Vessel Under the maritime law, the vessel to be rescued ...Download file to see next pages Read More
Share:
Tags
Cite this document
(“Maritime Law: Critically Discuss the Concept of Salvage as Found in Essay”, n.d.)
Maritime Law: Critically Discuss the Concept of Salvage as Found in Essay. Retrieved from https://studentshare.org/law/1450934-maritime-law-critically-discuss-the-concept-of

“Maritime Law: Critically Discuss the Concept of Salvage As Found in Essay”, n.d. https://studentshare.org/law/1450934-maritime-law-critically-discuss-the-concept-of.
Comments (0)
Click to create a comment or rate a document

CHECK THESE SAMPLES OF Maritime Law: Critically Discuss the Concept of Salvage as Found in the Law of England and Wales

The fact that it gives customers a variety of fresh food ingredients to choose from made the business very attractive to customers.
For this study, a brief overview with regards to a Mongolian restaurant business will be provided followed by discussing the concept and the primary purpose of a business plan. Eventually, the importance of using a business plan in starting a new Mongolian restaurant will be discussed.
In the process of discussing the importance of a business plan, the role of a business plan with regards to the success of a restaurant will be highlighted. Aiming to project the student’s understanding of the subject matter, the point of discussion will include: (1) selecting a good location and the ren...
9 Pages (2250 words) Term Paper

Philosophers, psychologists and educationists have attempted to approach and analyse the issues of childhood from either their socio-cultural perspectives or from their respective disciplines (Richards & Light, 1986; Burman, 1994a; Woodhead, 1999). A look at the theories suggests that the concept of childhood and the position of children has evolved down the ages into a child or childhood-centric view. In the research works of both Elizabeth Coates from the discipline of Education and Wataru Takei from Psychology, the child-centric model of research is apparent. This aspect of their research has not only made it interesting but at the same time palpable.
Coates’ research on children and their learning response in an...
6 Pages (1500 words) Case Study

New and complex issues have arisen which demanded fresh understanding and handling of cases involved them. This has resulted in the enhanced development of specialized laws e.g. cyber laws and interpretation of those laws. The same is true with Media Laws. Media has developed much in the last half-century. As it evolved as a profession and more people started to join it, there arose the levels of money involved in it. With this grew the contractual obligations on the parts of parties and concerned laws e.g. patent laws, privacy laws, and copyrights laws, etc. also started to play their parts. With these issues, the role of law in the media industry also reached a new height.
Mathew Fisher, the appellant, joined a band with Mr...
6 Pages (1500 words) Assignment
sponsored ads
Save Your Time for More Important Things
Let us write or edit the essay on your topic "Maritime Law: Critically Discuss the Concept of Salvage as Found in the Law of England and Wales" with a personal 20% discount.
GRAB THE BEST PAPER

Let us find you another Essay on topic Maritime Law: Critically Discuss the Concept of Salvage as Found in the Law of England and Wales for FREE!