Law of the Sea - Essay Example

Comments (0)
Add to wishlistDelete from wishlist
Cite this document
Summary
Title: Law of the Sea Introduction: Doctrine related to sea is a concept that came into existence in and after the seventeenth century1. Earlier to that the sea remained free of any law or regulation. The effects of pollution, as well as the huge stocks of fish leading to tensions among the coastal countries trying to preserve their own rights on them were causing threats to the seas…
Download full paperFile format: .doc, available for editing
HIDE THIS PAPERGRAB THE BEST PAPER97.5% of users find it useful 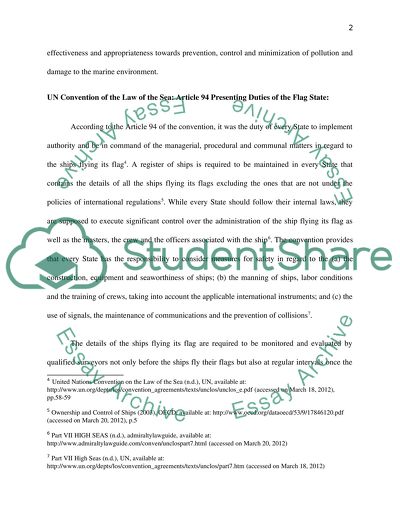 Extract of sample "Law of the Sea"

Download file to see previous pages The different provisions of this convention included setting of limits, navigation rules, exclusive economic zones, continental shelf, deep seabed mining, the exploitation regime, prospects of technology, the issue of universal participation in the convention, pioneer investors, protection of the marine environment, marine scientific research, and settlement of disputes3. The present study focuses on the UN Convention on the Law of the Sea 1982 and discusses about the powers that the Convention provides to flag, port and coastal states trying to determine its effectiveness and appropriateness towards prevention, control and minimization of pollution and damage to the marine environment. UN Convention of the Law of the Sea: Article 94 Presenting Duties of the Flag State: According to the Article 94 of the convention, it was the duty of every State to implement authority and be in command of the managerial, procedural and communal matters in regard to the ships flying its flag4. A register of ships is required to be maintained in every State that contains the details of all the ships flying its flags excluding the ones that are not under the policies of international regulations5. While every State should follow their internal laws, they are supposed to execute significant control over the administration of the ship flying its flag as well as the masters, the crew and the officers associated with the ship6. The convention provides that every State has the responsibility to consider measures for safety in regard to the (a) the construction, equipment and seaworthiness of ships; (b) the manning of ships, labor conditions and the training of crews, taking into account the applicable international instruments; and (c) the use of signals, the maintenance of communications and the prevention of collisions7. The details of the ships flying its flag are required to be monitored and evaluated by qualified surveyors not only before the ships fly their flags but also at regular intervals once the ships have started. Charts, nautical publications and navigational equipment and instruments that are necessary for the purpose of navigation safety of the ship also need to be available8. Officers and masters in association of the ships should be suitably qualified in seamanship, routing, communications and marine engineering and that the crew members possess sufficient knowledge regarding the type, size, technology and equipment of the ship9. The convention also provides that the crew members as well as the officers and masters need to be acquainted well with the regulations as directed by the law for the safety of life at sea, the avoidance of collisions, the anticipation, diminution and power of marine pollution, and the maintenance of communications by radio10. For the implementation of the above mentioned measures, the convention also rules that every State should be familiar with the regulations, procedures and practices11 internationally stated and thus consider safety measures accordingly. A State has the provision of reporting to the flag State in case any irresponsibility or lack of proper control is observed by the State in relation to the ship flying its flag12. In case of any casualty or incident in navigation leading to loss of lives or in cases of serious ...Download file to see next pagesRead More
Share:
Tags
Cite this document
(“Law of the Sea Essay Example | Topics and Well Written Essays - 2000 words”, n.d.)
Law of the Sea Essay Example | Topics and Well Written Essays - 2000 words. Retrieved from https://studentshare.org/law/1445355-law-of-the-sea-the-question-is-at-the-assignment
(Law of the Sea Essay Example | Topics and Well Written Essays - 2000 Words)
Law of the Sea Essay Example | Topics and Well Written Essays - 2000 Words. https://studentshare.org/law/1445355-law-of-the-sea-the-question-is-at-the-assignment.
“Law of the Sea Essay Example | Topics and Well Written Essays - 2000 Words”, n.d. https://studentshare.org/law/1445355-law-of-the-sea-the-question-is-at-the-assignment.
Comments (0)
Click to create a comment or rate a document

CHECK THESE SAMPLES OF Law of the Sea

New and complex issues have arisen which demanded fresh understanding and handling of cases involved them. This has resulted in the enhanced development of specialized laws e.g. cyber laws and interpretation of those laws. The same is true with Media Laws. Media has developed much in the last half-century. As it evolved as a profession and more people started to join it, there arose the levels of money involved in it. With this grew the contractual obligations on the parts of parties and concerned laws e.g. patent laws, privacy laws, and copyrights laws, etc. also started to play their parts. With these issues, the role of law in the media industry also reached a new height.
Mathew Fisher, the appellant, joined a band with Mr...
6 Pages(1500 words)Assignment
sponsored ads
Save Your Time for More Important Things
Let us write or edit the essay on your topic "Law of the Sea" with a personal 20% discount.
GRAB THE BEST PAPER

Let us find you another Essay on topic Law of the Sea for FREE!