Comments (0)
Add to wishlist Delete from wishlist
Cite this document
Summary
Name Instructor Class Date Arizona Immigration Law In April 2010, the Arizona legislators saw the need to make additional provisions on crimes and penalties related to immigrations in the state. The led to the enactment of two laws: SB 1070 and HB 2162. These two laws suffered a set back before their date of effect as the US Department of Justice filed a law suit against them…
Download full paper File format: .doc, available for editing
HIDE THIS PAPERGRAB THE BEST PAPER92.4% of users find it useful 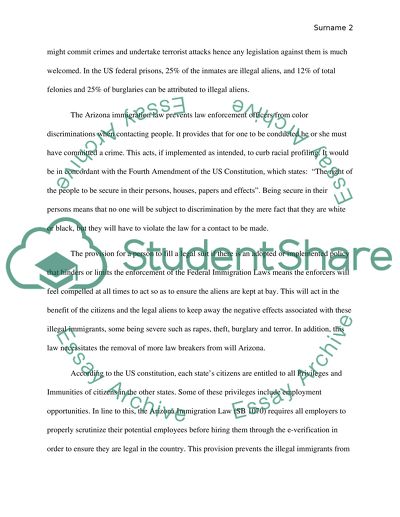 Download file to see previous pages Section 2.8b. States: “For any lawful contact made … a reasonable attempt shall be made, when practicable, to determine the immigration status of the person.” (Senate research). This is crucial as it seeks to protect the rights of lawful immigrants in the country. Section 3.f. clarifies this by stating: “This section does not apply to a person who maintains authorization from the federal government to remain in the United States.” The constitution requires that governments protect their citizens from crimes such as burglary and foreign security threats. By enacting the immigration law, Arizona legislators acted in accordance with the constitution to protect the citizens. The law seeks to curb potential national threats from immigrants in possession of deadly weapons and anything that can be used in executing terror attacks. The country suffers a security threat from illegal immigrants who might commit crimes and undertake terrorist attacks hence any legislation against them is much welcomed. In the US federal prisons, 25% of the inmates are illegal aliens, and 12% of total felonies and 25% of burglaries can be attributed to illegal aliens. The Arizona immigration law prevents law enforcement officers from color discriminations when contacting people. It provides that for one to be conducted he or she must have committed a crime. This acts, if implemented as intended, to curb racial profiling. It would be in concordant with the Fourth Amendment of the US Constitution, which states: “The right of the people to be secure in their persons, houses, papers and effects”. Being secure in their persons means that no one will be subject to discrimination by the mere fact that they are white or black, but they will have to violate the law for a contact to be made. The provision for a person to fill a legal suit if there is an adopted or implemented policy that hinders or limits the enforcement of the Federal Immigration Laws means the enforcers will feel compelled at all times to act so as to ensure the aliens are kept at bay. This will act in the benefit of the citizens and the legal aliens to keep away the negative effects associated with these illegal immigrants, some being severe such as rapes, theft, burglary and terror. In addition, this law necessitates the removal of more law breakers from will Arizona. According to the US constitution, each state’s citizens are entitled to all Privileges and Immunities of citizens in the other states. Some of these privileges include employment opportunities. In line to this, the Arizona Immigration Law (SB 1070) requires all employers to properly scrutinize their potential employees before hiring them through the e-verification in order to ensure they are legal in the country. This provision prevents the illegal immigrants from taking away jobs from the citizens and hence, a beneficial one. It further requires employers to keep a record of the employee for at least three months and further stipulates that incase an employer has hired an illegal emigrant, he or she should be aligned in a court of law. It also gives the state the right to suspend or terminate business licenses whenever the business entities violate this legislation. This strongly defends the US citizens’ privilege to access job opportunities in their states. It can also be argued that the Arizona Immig ...Download file to see next pages Read More
Share:
Cite this document
(“Arizona Immigration Law Research Paper Example | Topics and Well Written Essays - 1750 words”, n.d.)
Retrieved from https://studentshare.org/law/1442543-arizona-immigration-law

New and complex issues have arisen which demanded fresh understanding and handling of cases involved them. This has resulted in the enhanced development of specialized laws e.g. cyber laws and interpretation of those laws. The same is true with Media Laws. Media has developed much in the last half-century. As it evolved as a profession and more people started to join it, there arose the levels of money involved in it. With this grew the contractual obligations on the parts of parties and concerned laws e.g. patent laws, privacy laws, and copyrights laws, etc. also started to play their parts. With these issues, the role of law in the media industry also reached a new height.
Mathew Fisher, the appellant, joined a band with Mr...
6 Pages (1500 words) Assignment
sponsored ads
Save Your Time for More Important Things
Let us write or edit the research paper on your topic "Arizona Immigration Law" with a personal 20% discount.
GRAB THE BEST PAPER

Let us find you another Research Paper on topic Arizona Immigration Law for FREE!