The Law of Contracts of the Australian Law - Essay Example

Comments (0)
Add to wishlist Delete from wishlist
Cite this document
Summary
The paper describes several requirements of the admissibility of any case as under the law of contract. For any case to be admissible under the Australian law of contracts there must be two parties involved, where one party gives the offer (offeror) and the other party accepts the offer given…
Download full paper File format: .doc, available for editing
HIDE THIS PAPERGRAB THE BEST PAPER91.3% of users find it useful 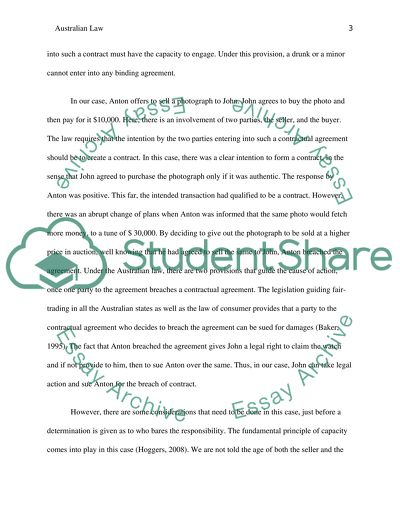 Extract of sample "The Law of Contracts of the Australian Law"

Download file to see previous pages Anton offers to sell a photograph to John. John agrees to buy the photo and then pay for it $10,000. Here, there is an involvement of two parties, the seller, and the buyer. The law requires that the intention by the two parties entering into such a contractual agreement should be to create a contract. In this case, there was a clear intention to form a contract, in the sense that John agreed to purchase the photograph only if it was authentic. The response by Anton was positive. This far, the intended transaction had qualified to be a contract. However, there was an abrupt change of plans when Anton was informed that the same photo would fetch more money, to a tune of $ 30,000. By deciding to give out the photograph to be sold at a higher price in the auction, well knowing that he had agreed to sell the same to John, Anton breached the agreement. Under the Australian law, there are two provisions that guide the cause of action, once one party to the agreement breaches a contractual agreement. The legislation guiding fair-trading in all the Australian states, as well as the law of consumer, provides that a party to the contractual agreement who decides to breach the agreement can be sued for damages (Baker, 1995). The fact that Anton breached the agreement gives John a legal right to claim the watch and if not provide to him, then to sue Anton over the same. Thus, in our case, John can take legal action and sue Anton for the breach of contract. However, there are some considerations that need to be done in this case, just before a determination is given as to who bears the responsibility. ...Download file to see next pages Read More
Share:
Tags
Cite this document
(“Australian Law Essay Example | Topics and Well Written Essays - 1500 words”, n.d.)
Retrieved from https://studentshare.org/law/1442056-australian-law

New and complex issues have arisen which demanded fresh understanding and handling of cases involved them. This has resulted in the enhanced development of specialized laws e.g. cyber laws and interpretation of those laws. The same is true with Media Laws. Media has developed much in the last half-century. As it evolved as a profession and more people started to join it, there arose the levels of money involved in it. With this grew the contractual obligations on the parts of parties and concerned laws e.g. patent laws, privacy laws, and copyrights laws, etc. also started to play their parts. With these issues, the role of law in the media industry also reached a new height.
Mathew Fisher, the appellant, joined a band with Mr...
6 Pages (1500 words) Assignment
sponsored ads
Save Your Time for More Important Things
Let us write or edit the essay on your topic "The Law of Contracts of the Australian Law" with a personal 20% discount.
GRAB THE BEST PAPER

Let us find you another Essay on topic The Law of Contracts of the Australian Law for FREE!