Comments (0)
Add to wishlistDelete from wishlist
Cite this document
Summary
As regards to express authority,there will be no issues as everything will be explained or predetermined. An ostensible authority will occur when if the authority has been conferred on the agent, even if such authority is not bestowed upon him by express words…
Download full paperFile format: .doc, available for editing
HIDE THIS PAPERGRAB THE BEST PAPER91.2% of users find it useful 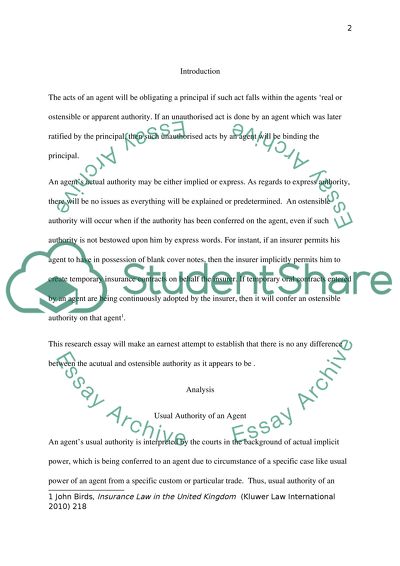 Download file to see previous pages An agent’s actual authority may be either implied or express. As regards to express authority, there will be no issues as everything will be explained or predetermined. An ostensible authority will occur when if the authority has been conferred on the agent, even if such authority is not bestowed upon him by express words. For instant, if an insurer permits his agent to have in possession of blank cover notes, then the insurer implicitly permits him to create temporary insurance contracts on behalf the insurer. If temporary oral contracts entered by an agent are being continuously adopted by the insurer, then it will confer an ostensible authority on that agent1. This research essay will make an earnest attempt to establish that there is no any difference between the acutual and ostensible authority as it appears to be . Analysis Usual Authority of an Agent An agent’s usual authority is interpreted by the courts in the background of actual implicit power, which is being conferred to an agent due to circumstance of a specific case like usual power of an agent from a specific custom or particular trade. Thus, usual authority of an agent is viewed as a feature of apparent or actual authority. . In Watteau v Fenwick , the manager of a beer house had the express authority to buy cigars from the defendant onlyHowever, the agent (manager) bought the cigars from the plaintiff. In a suit for claiming to settle the amount due to the plaintiff, it was held that as the plaintiff was not aware of the express restriction, and since, it fell within the usual power of the manager of a beer house to place an order for this type of goods, the principal was held accountable3. However, in Daun v Simmins4, the decision held in Watteau v Fenwick was contrasted where it was observed that if an agent (manager) of a “tied” public house only has the power in general to purchase spirits from a specific source. In cases like this, no reliance on an implied authority can be made by a supplier so as to sue the principal5. Implied or Ostensible or Apparent Authority An implicit or implied or apparent or ostensible authority means where a third party is enticed to enter into a contract with a principal through a party who seems to have power to function or act but in reality , he is lacking such power or authority. In “Freeman & Lockyer v Buckhurst Park Properties (Mangal) Ltd”, Diplock, LJ held that there is vast difference between apparent authority and actual authority. Despite these, terms are always coincided and co-existed without the other and their relevant background may be diverse. In actual authority, there is a relationship which exists between an agent and the principal legally which is ushered by an unanimous agreement to which they are regarded to be parties6. In ING Re (UK) Ltd v R & V Versicherung AG7, the apparent authority of an agent was explained by Toulson J as one, which is footed upon estoppel by representation. Where a third party (X) is being caused or represented by a Principal (P) that the agent (A) has the power to function on P’s behalf, and X is dealing with A as an agent of P purely on the reliance of such representation, P is liable to the acts of A to the same magnitude as if A had the required power which he was demonstrating as possessing8. In Zurich General Accident and Liability ...Download file to see next pagesRead More
Share:
Tags
Cite this document
(“Agency and partnershipl law assessed coursework Essay”, n.d.)
Agency and partnershipl law assessed coursework Essay. Retrieved from https://studentshare.org/law/1440870-agency-and-partnershipl-law-assessed-coursework
(Agency and Partnershipl Law Assessed Coursework Essay)
Agency and Partnershipl Law Assessed Coursework Essay. https://studentshare.org/law/1440870-agency-and-partnershipl-law-assessed-coursework.
“Agency and Partnershipl Law Assessed Coursework Essay”, n.d. https://studentshare.org/law/1440870-agency-and-partnershipl-law-assessed-coursework.
Comments (0)
Click to create a comment or rate a document

CHECK THESE SAMPLES OF Agency and partnershipl law assessed coursework

re representing our company as their business consultants and our responsibilities are limited to the knowledge of the client’s business and information provided by the client.
The company Of-Fit has been operating as office supplies and equipment supplier since 1998. Their corporate office is in Aberdeen and it has excellent industry relations. The company is a sole proprietorship and its owner is Mr. Andrew Schwatz who has been working in the industry for more than 20 years. The company current staff is 8 and its revenues are £115,690 and £156,178 in 2008. The company aims to expand its operations in other business areas and regions of the UK.
The detailed business plan developed for this report incor...
12 Pages(3000 words)Business Plan
sponsored ads
Save Your Time for More Important Things
Let us write or edit the essay on your topic "Agency and partnershipl law assessed coursework" with a personal 20% discount.
GRAB THE BEST PAPER

Let us find you another Essay on topic Agency and partnershipl law assessed coursework for FREE!