Comments (0)
Add to wishlist Delete from wishlist
Cite this document
Summary
This essay "Tort Law" describes the topic of Tort law, that is a set of laws which covers civil cases. The researcher discuses how tort laws can mainly be divided into three parts and focuses on analyzing such parts including negligence torts, strict liability torts and intentional torts…
Download full paper File format: .doc, available for editing
HIDE THIS PAPERGRAB THE BEST PAPER95.2% of users find it useful 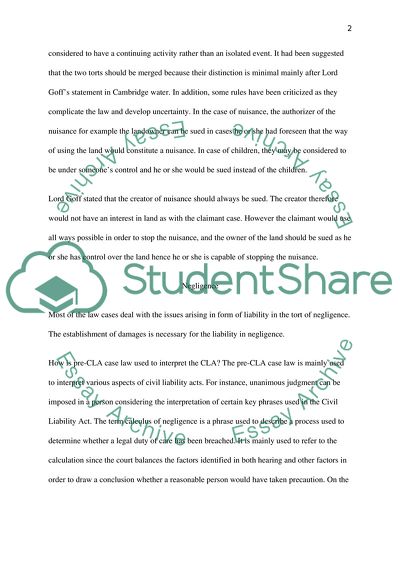 Download file to see previous pages This essay focusess on describing the tort laws, that today can mainly be divided into three huge parts including negligence torts, strict liability torts and intentional torts. The researcher explores the intentional torts in the essay that are offences that are committed by an individual who intends to harm as he commits the act knowing that injury would be the result of his or her act such as an assault. On the other hand, negligence is a type of tort that results unexpectedly. The action is normally not intended to harm while the actor does not know the result of the act. The researcher states that in the negligence act, the action leading to injury is not intended unlike the intentional tort. For example, the trespass of land and negligence are different from nuisance case. For instance, the researcher mentiones that in the nuisance cases actions deal with repetitive injuries while the trespass and negligence actions offer relief even if the injury resulted from one event. In the second part of the essay, the researcher discusses various compensatory law issues and vicarious liability. There are various goals of compensatory damages that were decribed by the researcher. The main goal of compensatory damages is compensate the personal injury and property damages, that were caused and proved. Vicarious liability mainly is another issue covered in the essay, the issue arises in regard to specific relationships between the defendant and another in the part of defendant to the other party. ...Download file to see next pages Read More
Share:
Tags
Cite this document
(“Tort Law Essay Example | Topics and Well Written Essays - 1500 words - 1”, n.d.)
Retrieved from https://studentshare.org/law/1437817-tort-law

New and complex issues have arisen which demanded fresh understanding and handling of cases involved them. This has resulted in the enhanced development of specialized laws e.g. cyber laws and interpretation of those laws. The same is true with Media Laws. Media has developed much in the last half-century. As it evolved as a profession and more people started to join it, there arose the levels of money involved in it. With this grew the contractual obligations on the parts of parties and concerned laws e.g. patent laws, privacy laws, and copyrights laws, etc. also started to play their parts. With these issues, the role of law in the media industry also reached a new height.
Mathew Fisher, the appellant, joined a band with Mr...
6 Pages (1500 words) Assignment
sponsored ads
Save Your Time for More Important Things
Let us write or edit the essay on your topic "Tort Law" with a personal 20% discount.
GRAB THE BEST PAPER

Let us find you another Essay on topic Tort Law for FREE!