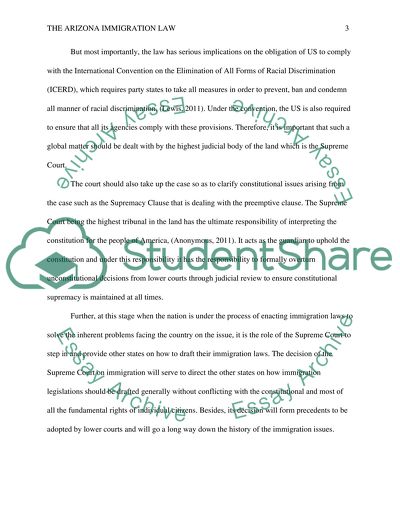 Download file to see previous pages The Supreme Court could admit the case or decline to take it on. This paper will discuss the likelihood of the Supreme Court taking the case and the possible decision it may make as well as the impact of that decision. Likelihood of Supreme Court to Admit the Case The decision whether the Supreme Court should undertake the case is both constitutional and policy based. This is a case that has been very controversial with dissenting decisions from inferior courts. The Arizona immigration law does not only involve all the states of America but it is also a matter of international concern on human rights. Upon its enactment, several UN experts and special rapporteurs raised strong concerns on its legality under international law. The legislation conflicts with several international law instruments such as the Universal Declaration of Human Rights as well as the International Covenant on Civil and Political Rights which US became a party to in 1992. But most importantly, the law has serious implications on the obligation of US to comply with the International Convention on the Elimination of All Forms of Racial Discrimination (ICERD), which requires party states to take all measures in order to prevent, ban and condemn all manner of racial discrimination, (Lewis, 2011). Under the convention, the US is also required to ensure that all its agencies comply with these provisions. Therefore, it is important that such a global matter should be dealt with by the highest judicial body of the land which is the Supreme Court. The court should also take up the case so as to clarify constitutional issues arising from the case such as the Supremacy Clause that is dealing with the preemptive clause. The Supreme Court being the highest tribunal in the land has the ultimate responsibility of interpreting the constitution for the people of America, (Anonymous, 2011). It acts as the guardian to uphold the constitution and under this responsibility it has the responsibility to formally overturn unconstitutional decisions from lower courts through judicial review to ensure constitutional supremacy is maintained at all times. Further, at this stage when the nation is under the process of enacting immigration laws to solve the inherent problems facing the country on the issue, it is the role of the Supreme Court to step in and provide other states on how to draft their immigration laws. The decision of the Supreme Court on immigration will serve to direct the other states on how immigration legislations should be drafted generally without conflicting with the constitutional and most of all the fundamental rights of individual citizens. Besides, its decision will form precedents to be adopted by lower courts and will go a long way down the history of the immigration issues. With all these considerations, the Supreme Court cannot afford to leave such an important matter in the hands of the lower courts. It has to step in and provide the way forward not just for the country of the US but also the global world in general. Likely Decision Even though most provisions of the law are legally unobjectionable, the SB 1070 contains some unconstitutional parts which are sections 2(B), 6, 3 and 5(c). The first contention is the requirement of the SB 1070 that the immigration officers determine the status of the ...Download file to see next pagesRead More
Share:
Cite this document
(“Immigration Law of Arizona Assignment Example | Topics and Well Written Essays - 1250 words”, n.d.)
Immigration Law of Arizona Assignment Example | Topics and Well Written Essays - 1250 words. Retrieved from https://studentshare.org/law/1437776-immigration-law-of-arizona
(Immigration Law of Arizona Assignment Example | Topics and Well Written Essays - 1250 Words)
Immigration Law of Arizona Assignment Example | Topics and Well Written Essays - 1250 Words. https://studentshare.org/law/1437776-immigration-law-of-arizona.
“Immigration Law of Arizona Assignment Example | Topics and Well Written Essays - 1250 Words”, n.d. https://studentshare.org/law/1437776-immigration-law-of-arizona.
Comments (0)
Click to create a comment or rate a document

CHECK THESE SAMPLES OF Immigration Law of Arizona

New and complex issues have arisen which demanded fresh understanding and handling of cases involved them. This has resulted in the enhanced development of specialized laws e.g. cyber laws and interpretation of those laws. The same is true with Media Laws. Media has developed much in the last half-century. As it evolved as a profession and more people started to join it, there arose the levels of money involved in it. With this grew the contractual obligations on the parts of parties and concerned laws e.g. patent laws, privacy laws, and copyrights laws, etc. also started to play their parts. With these issues, the role of law in the media industry also reached a new height.
Mathew Fisher, the appellant, joined a band with Mr...
6 Pages(1500 words)Assignment
sponsored ads
Save Your Time for More Important Things
Let us write or edit the assignment on your topic "Immigration Law of Arizona" with a personal 20% discount.
GRAB THE BEST PAPER

Let us find you another Assignment on topic Immigration Law of Arizona for FREE!