Judges, independence and the Power of Common Law - Essay Example

Comments (0)
Add to wishlist Delete from wishlist
Cite this document
Summary
This essay presents a brief examination of the concept of the Judicial Independence, its effect on a country’s domestic economy and conflict resolution and mediation practices, and how the Judicial Independence is managed by measures of checks and balances…
Download full paper File format: .doc, available for editing
HIDE THIS PAPERGRAB THE BEST PAPER91.6% of users find it useful 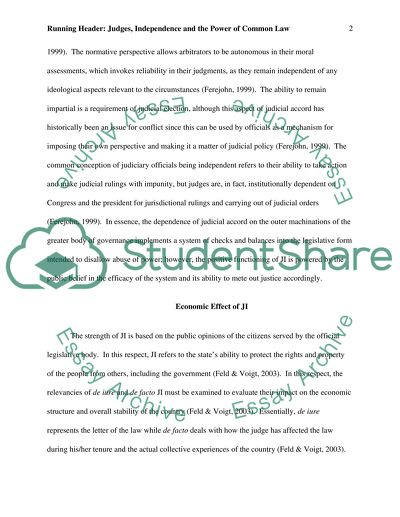 Extract of sample "Judges, independence and the Power of Common Law"

Download file to see previous pages flict since this can be used by officials as a mechanism for imposing their own perspective and making it a matter of judicial policy (Ferejohn, 1999). The common conception of judiciary officials being independent refers to their ability to take action and make judicial rulings with impunity, but judges are, in fact, institutionally dependent on Congress and the president for jurisdictional rulings and carrying out of judicial orders (Ferejohn, 1999). In essence, the dependence of judicial accord on the outer machinations of the greater body of governance implements a system of checks and balances into the legislative form intended to disallow abuse of power; however, the positive functioning of JI is powered by the public belief in the efficacy of the system and its ability to mete out justice accordingly. Economic Effect of JI The strength of JI is based on the public opinions of the citizens served by the official legislative body. In this respect, JI refers to the state’s ability to protect the rights and property of the people from others, including the government (Feld & Voigt, 2003). In this respect, the relevancies of de iure and de facto JI must be examined to evaluate their impact on the economic structure and overall stability of the country (Feld & Voigt, 2003). Essentially, de iure represents the letter of the law while de facto deals with how the judge has affected the law during his/her tenure and the actual collective experiences of the country (Feld & Voigt, 2003). Where de iure has been determined to have no impact on a country’s actual financial functionality, as determined through measure of the GDP growth, de facto JI positively influences the financial aspects of a country’s growth (Feld & Voigt, 2003). Summarily, the independence exhibited...
This essay focuses on interconnection between judges and the concepts of the Judicial Independence and the power of Common Law.
In the upholding of public laws and statutes, each nation has sovereignty, endorsed by the United Nations, which allows judiciary officials to preside over legal matters in the interest of maintaining peace and order. Such judicial independence (JI) has bearings on numerous aspects that affect the functionality of a country, such as their economic structure, conflict resolution, and allocation of correctional measures when laws have been broken. Although some judicial tribunals are dependently selected to preside over certain matters and others are independently selected to serve for a specified amount of time, both mechanisms essentially serve the same purpose, which is to arbitrate and pass binding judgments to punish criminal activity and resolve disputes, which in some cases may create precedents that translate into new legislation. To this effect, JI is intended to provide judges the freedom to make decisions without pressure or inducements from affected parties to resolve matters in their favor or be forced to later defend the decisions they make and requires a solid system of checks and balances to ensure that legislative officials are not being unduly manipulated.
The paper concludes that, in order to be effective, judges must have impunity in handing down their edicts and these decisions are strengthened by the constitutional and legislative support received. ...Download file to see next pages Read More
Share:
Tags
Cite this document
(“Judges, independence and the Power of Common Law Essay”, n.d.)
Judges, independence and the Power of Common Law Essay. Retrieved from https://studentshare.org/law/1437191-judges-independence-and-the-power-of-common-law

“Judges, Independence and the Power of Common Law Essay”, n.d. https://studentshare.org/law/1437191-judges-independence-and-the-power-of-common-law.
Comments (0)
Click to create a comment or rate a document

CHECK THESE SAMPLES OF Judges, independence and the Power of Common Law

New and complex issues have arisen which demanded fresh understanding and handling of cases involved them. This has resulted in the enhanced development of specialized laws e.g. cyber laws and interpretation of those laws. The same is true with Media Laws. Media has developed much in the last half-century. As it evolved as a profession and more people started to join it, there arose the levels of money involved in it. With this grew the contractual obligations on the parts of parties and concerned laws e.g. patent laws, privacy laws, and copyrights laws, etc. also started to play their parts. With these issues, the role of law in the media industry also reached a new height.
Mathew Fisher, the appellant, joined a band with Mr...
6 Pages (1500 words) Assignment
sponsored ads
Save Your Time for More Important Things
Let us write or edit the essay on your topic "Judges, independence and the Power of Common Law" with a personal 20% discount.
GRAB THE BEST PAPER

Let us find you another Essay on topic Judges, independence and the Power of Common Law for FREE!