Comments (0)
Add to wishlistDelete from wishlist
Cite this document
Summary
(Name) (Instructors’ name) (Course) (Date) Employment Law Discrimination against the Unemployed The article by Rampell Catherine in the New York Times is about the difficulties Americans have to go through in attaining employment. According to her, there are many conditions that exist before a person can gain employment…
Download full paperFile format: .doc, available for editing
HIDE THIS PAPERGRAB THE BEST PAPER96.5% of users find it useful 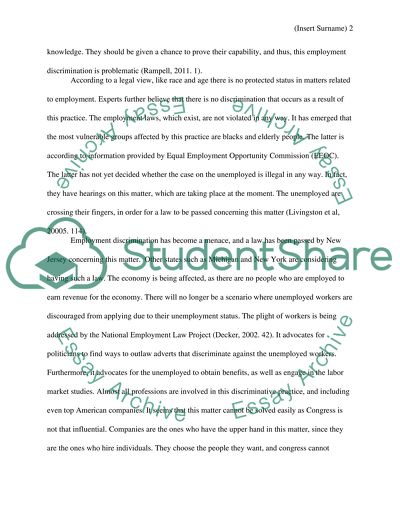 Download file to see previous pages 1). The employment issue, which exists, is whether it is right for resumes of unemployed people to be discarded by employers. An operations analyst in the information technology sector is an example of a person who is discriminated by the employment act. According to a recruiter, not working for six months is an obstacle towards finding employment. This ideology seems to have spread to almost all the American employers. Furthermore, the number of Americans who do not have jobs is at 14 million, and finding work is a problem. Some of America’s known Job websites such as Craigslist, CareerBuilder, and Monster.com are not employing the unemployed. This situation has a historical context like that, which took place during the Great Depression. During that time, many workers were left unemployed, and this is due to the crisis. It does not make sense when employers demand that potential recruits be currently employed. There are some people who are fresh out of college and have never worked, yet they have the skills and knowledge. They should be given a chance to prove their capability, and thus, this employment discrimination is problematic (Rampell, 2011. 1). According to a legal view, like race and age there is no protected status in matters related to employment. Experts further believe that there is no discrimination that occurs as a result of this practice. The employment laws, which exist, are not violated in any way. It has emerged that the most vulnerable groups affected by this practice are blacks and elderly people. The latter is according to information provided by Equal Employment Opportunity Commission (EEOC). The latter has not yet decided whether the case on the unemployed is illegal in any way. In fact, they have hearings on this matter, which are taking place at the moment. The unemployed are crossing their fingers, in order for a law to be passed concerning this matter (Livingston et al, 20005. 114). Employment discrimination has become a menace, and a law has been passed by New Jersey concerning this matter. Other states such as Michigan and New York are considering having such a law. The economy is being affected, as there are no people who are employed to earn revenue for the economy. There will no longer be a scenario where unemployed workers are discouraged from applying due to their unemployment status. The plight of workers is being addressed by the National Employment Law Project (Decker, 2002. 42). It advocates for politicians to find ways to outlaw adverts that discriminate against the unemployed workers. Furthermore, it advocates for the unemployed to obtain benefits, as well as engage in the labor market studies. Almost all professions are involved in this discriminative practice, and including even top American companies. It seems that this matter cannot be solved easily as Congress is not that influential. Companies are the ones who have the upper hand in this matter, since they are the ones who hire individuals. They choose the people they want, and congress cannot interfere. If the matter is taken to court, proving that discrimination occurred will be extremely hard. There is enough evidence to prove that workers who have stayed for long without being employed may not be beneficial to the work place. Some of the reasons why they are unemployed is because they lack competence, and are laid off as there is no work. In some ...Download file to see next pagesRead More
Share:
Tags
Cite this document
(“Employment Law Essay Example | Topics and Well Written Essays - 1000 words”, n.d.)
Employment Law Essay Example | Topics and Well Written Essays - 1000 words. Retrieved from https://studentshare.org/law/1436971-current-article
(Employment Law Essay Example | Topics and Well Written Essays - 1000 Words)
Employment Law Essay Example | Topics and Well Written Essays - 1000 Words. https://studentshare.org/law/1436971-current-article.
“Employment Law Essay Example | Topics and Well Written Essays - 1000 Words”, n.d. https://studentshare.org/law/1436971-current-article.
Comments (0)
Click to create a comment or rate a document

New and complex issues have arisen which demanded fresh understanding and handling of cases involved them. This has resulted in the enhanced development of specialized laws e.g. cyber laws and interpretation of those laws. The same is true with Media Laws. Media has developed much in the last half-century. As it evolved as a profession and more people started to join it, there arose the levels of money involved in it. With this grew the contractual obligations on the parts of parties and concerned laws e.g. patent laws, privacy laws, and copyrights laws, etc. also started to play their parts. With these issues, the role of law in the media industry also reached a new height.
Mathew Fisher, the appellant, joined a band with Mr...
6 Pages(1500 words)Assignment
sponsored ads
Save Your Time for More Important Things
Let us write or edit the essay on your topic "Employment Law" with a personal 20% discount.
GRAB THE BEST PAPER

Let us find you another Essay on topic Employment Law for FREE!