Should Polygyamy be against the Law - Research Paper Example

Comments (0)
Add to wishlistDelete from wishlist
Cite this document
Summary
The Legitimacy of Polygamy Course/Number Date The Legitimacy of Polygamy Polygamy refers to the act or state of being in a formal relationship with two or more spouses at the same time. In general law, polygamy used to be criminal, but today statutes sanctify the act and enforce the provisions guiding polygamy and bigamy…
Download full paperFile format: .doc, available for editing
HIDE THIS PAPERGRAB THE BEST PAPER92% of users find it useful 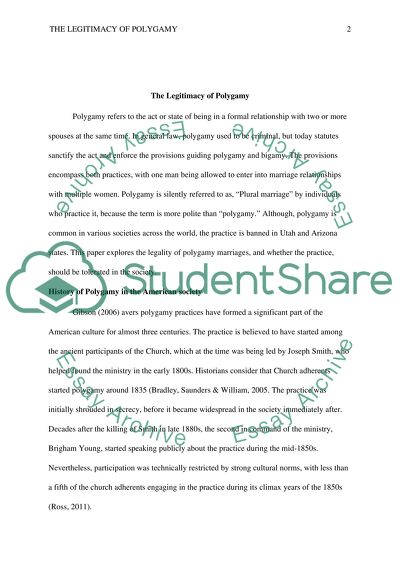 Extract of sample "Should Polygyamy be against the Law"

Download file to see previous pages This paper explores the legality of polygamy marriages, and whether the practice, should be tolerated in the society. History of Polygamy in the American society Gibson (2006) avers polygamy practices have formed a significant part of the American culture for almost three centuries. The practice is believed to have started among the ancient participants of the Church, which at the time was being led by Joseph Smith, who helped found the ministry in the early 1800s. Historians consider that Church adherents started polygamy around 1835 (Bradley, Saunders & William, 2005. The practice was initially shrouded in secrecy, before it became widespread in the society immediately after. Decades after the killing of Smith in late 1880s, the second in command of the ministry, Brigham Young, started speaking publicly about the practice during the mid-1850s. Nevertheless, participation was technically restricted by strong cultural norms, with less than a fifth of the church adherents engaging in the practice during its climax years of the 1850s (Ross, 2011). In early 1862, Congress ratified the initial of several legislations systematically geared at bringing to an end the trend by outlawing polygamy. These developments dealt the church a major financial blow, and even denying women of their voting rights in Utah. Almost two decades later, an adherent of the ministry challenged the legality of anti-polygamy legislations on religious justifications; however, the Supreme Court maintained that the unconstitutionality of polygamy was beyond doubt, and that the various government agencies could work to limit religious rights and privileges of the adherents. The congressional decrees were largely effective in terminating polygamy. This forced the Church to abandon the clamor for polygamy practices on September 25, 1890. At the same time, Church President Wilford Woodruff made public a formal statement referred to as “the Manifesto” (Bradley, Saunders & William, 2005). In 1894, Congress approved the Utah Enabling Act, which allowed Utah to begin processes aimed at acquiring the position of statehood, based upon the government constitution providing for an irrevocable decree outlawing polygamy. United States Congress approved Utah statehood two years later, a development that led to the implementation of the state constitution, which permanently outlawed polygamy practices within its jurisdiction. Additionally, polygamy was also classified as a crime by decree. After “the Manifesto,” was made public, the religious group stopped polygamy practices and started to detach polygamists from its flock. Eventually, religious factions resented the new development leading to the formation of “Fundamentalists” groups (Groleau, 2008). Bradley, Saunders and William (2005) indicate fundamentalists backed away to remote communities in an attempt to shun what they believed to be mass maltreatment. Since then, the state authorities have carried out episodic mass apprehending and questionings on communities practicing polygamy. For instance, mass apprehending was implemented in 1935, and during the end of World War II. Arizona on its part carried out the largest crackdown yet on the community in 1953 (Cole, 2011). Although, the infamous Short Creek Raid led to the apprehending and arraignment ...Download file to see next pagesRead More
Share:
Tags
Cite this document
(“Should Polygyamy be against the Law Research Paper”, n.d.)
Retrieved de https://studentshare.org/law/1436604-should-polygyamy-be-against-the-law
(Should Polygyamy Be Against the Law Research Paper)
https://studentshare.org/law/1436604-should-polygyamy-be-against-the-law.
“Should Polygyamy Be Against the Law Research Paper”, n.d. https://studentshare.org/law/1436604-should-polygyamy-be-against-the-law.
Comments (0)
Click to create a comment or rate a document

CHECK THESE SAMPLES OF Should Polygyamy be against the Law

New and complex issues have arisen which demanded fresh understanding and handling of cases involved them. This has resulted in the enhanced development of specialized laws e.g. cyber laws and interpretation of those laws. The same is true with Media Laws. Media has developed much in the last half-century. As it evolved as a profession and more people started to join it, there arose the levels of money involved in it. With this grew the contractual obligations on the parts of parties and concerned laws e.g. patent laws, privacy laws, and copyrights laws, etc. also started to play their parts. With these issues, the role of law in the media industry also reached a new height.
Mathew Fisher, the appellant, joined a band with Mr...
6 Pages(1500 words)Assignment
sponsored ads
Save Your Time for More Important Things
Let us write or edit the research paper on your topic "Should Polygyamy be against the Law" with a personal 20% discount.
GRAB THE BEST PAPER

Let us find you another Research Paper on topic Should Polygyamy be against the Law for FREE!