Comments (0)
Add to wishlistDelete from wishlist
Cite this document
Summary
CASE STUDY ON INTRUDING IMA AND FALSIFIED REPORT Name Institution Professor Course Date Introduction Police officers are more often than not judged by their conduct in public as they carry out their duties. Since most of the officers are alone when in service, they have a tendency of doing things their own way putting the integrity of the whole police force in question…
Download full paperFile format: .doc, available for editing
HIDE THIS PAPERGRAB THE BEST PAPER96.7% of users find it useful 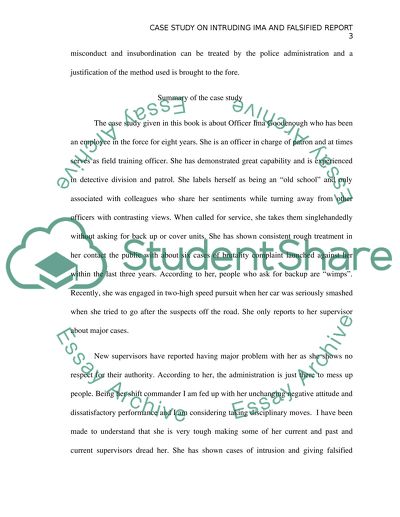 Download file to see previous pages Police force is very crucial in any democratic system for maintaining law and order. As such they should have high ethical standards. Police officers are charged with the responsibility of promoting the rights of citizens but at the same time restricting the right of people who are a threat to the general good of the society. In their routine, they are sometimes compelled to appeal to force when a situation calls for it. Deliberate brutal treatment of offenders on the part of the officers is however a crime. To keep the trust of the public, misconducts on the parts of police should be dealt with in an acceptable way. Any officer given the duty to serve the public should take an oath of office and adhere to the set a code of ethics. Most people understand the importance of the police force in law enforcement and their role in maintaining order. As such they are very willing to cooperate with the police in order to live in a safe environment (Peak, 2001). Misconducts from police officers weaken the relationship between the police and the people making them loose trust on the force. In this paper, the case study of Intruding Ima and falsified report and how such cases of misconduct and insubordination can be treated by the police administration and a justification of the method used is brought to the fore. Summary of the case study The case study given in this book is about Officer Ima Goodenough who has been an employee in the force for eight years. She is an officer in charge of patron and at times serves as field training officer. She has demonstrated great capability and is experienced in detective division and patrol. She labels herself as being an “old school” and only associated with colleagues who share her sentiments while turning away from other officers with contrasting views. When called for service, she takes them singlehandedly without asking for back up or cover units. She has shown consistent rough treatment in her contact the public with about six cases of brutality complaint launched against her within the last three years. According to her, people who ask for backup are “wimps”. Recently, she was engaged in two-high speed pursuit when her car was seriously smashed when she tried to go after the suspects off the road. She only reports to her supervisor about major cases. New supervisors have reported having major problem with her as she shows no respect for their authority. According to her, the administration is just there to mess up people. Being her shift commander I am fed up with her unchanging negative attitude and dissatisfactory performance and I am considering taking disciplinary moves. I have been made to understand that she is very tough making some of her current and past and current supervisors dread her. She has shown cases of intrusion and giving falsified reports on several occasions. In one instance, when she was on patrol, she is reported to have responded to a shooting call outside her jurisdiction. She radios her supervisor that she was assisting and intrudes into a home where different officers and paramedics already had the situation under control. She tampers with evidence by holding a revolver that she finds lying on the floor. When asked to write about a report about the incidence, she leaves out the part where she interferes with the evidence. Her file shows that her performance for the last eight years have ...Download file to see next pagesRead More
Share:
Cite this document
(“Intruding Ima and Falsified Report Case Study Example | Topics and Well Written Essays - 1750 words”, n.d.)
Retrieved de https://studentshare.org/law/1436237-intruding-ima-and-the-falsified-report-case-study
(Intruding Ima and Falsified Report Case Study Example | Topics and Well Written Essays - 1750 Words)
https://studentshare.org/law/1436237-intruding-ima-and-the-falsified-report-case-study.
“Intruding Ima and Falsified Report Case Study Example | Topics and Well Written Essays - 1750 Words”, n.d. https://studentshare.org/law/1436237-intruding-ima-and-the-falsified-report-case-study.
Comments (0)
Click to create a comment or rate a document

CHECK THESE SAMPLES OF Intruding Ima and Falsified Report

Nine Named Grounds on Which Discriminations is Prohibited in Ireland

Oedipus the King by T. Hoey

DIOPHANTUS A KEY FIGURE IN THE HISTORY OF ALGEBRA

3 key differences between managers and leaders

...Introduction General Electric is certainly no longer what it was a few years ago under the dynamic and hard-driving leadership of Jack Welch. G.E. has a market cap of $169 billion but it had made huge bets in the financial sector which is not doing exactly very well for the last few years. As a result of this wrong bet, it is now scrambling to sell some assets and diverting cash away from dividends (Cox & Cyran, NYT). This is symptomatic of what seems wrong with G.E. today which is beginning to look like a poor shadow of its former self. It had been often compared to one of its rivals that can approximate G.E.s range of businesses in the aerospace, power generation and infrastructure sectors but with strong financial statements... General...
12 Pages(3000 words)Report
sponsored ads
Save Your Time for More Important Things
Let us write or edit the case study on your topic "Intruding Ima and Falsified Report" with a personal 20% discount.
GRAB THE BEST PAPER

Let us find you another Case Study on topic Intruding Ima and Falsified Report for FREE!