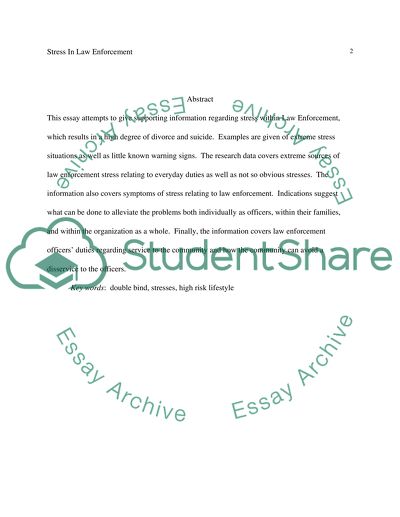 Download file to see previous pages Indications suggest what can be done to alleviate the problems both individually as officers, within their families, and within the organization as a whole. Finally, the information covers law enforcement officers’ duties regarding service to the community and how the community can avoid a disservice to the officers. Key words: double bind, stresses, high risk lifestyle Stress in Law Enforcement Results in a High Degree of Divorce and Suicide. How does this Problem Develop and How is it Mitigated? Introduction “If you ever find me like that (shot), you better start looking for the one who did it, because I would never do that to myself (Boyce, 2006).” This was a statement previously quoted by a State Trooper who did not come home as usual after his shift. The officer was found with a gunshot wound to the head and sitting in his own car after a long and diligent search. The State Crime Lab determined that he had taken his own life. What would cause an officer to do such a thing to himself? Sergeant Boyce can remember seeing warning signs, after the fact, that the officer was under much physical and emotional stress (Boyce, 2006). The dead officer had become withdrawn and did not work with the rest of the officers as he had in the past. Sergeant James Boyce recalls himself when dozing in a chair at his home on the couch, and his wife or one of the kids touched him, he would sit straight up and make a fist as if ready to fight. Is an incident such as this caused by the everyday stress of law enforcement? (Boyce, 2006). According to Hans Selye, a respected researcher in stress, “police work is the most stressful occupation in America (Boyce, 2006).” Law enforcement stress leads to one of the highest, suicide rates in the nation in comparison to other occupations. The divorce rate for other occupations is 50 percent while law enforcement divorce rates are as high as 75 percent. This makes the divorce rate among police officers second in the nation. These facts alone are a warning sign targeted at law enforcement management. Extreme Negative Effects Dan Goldfarb covers the impact of stress on police officers at a union delegates meeting. He defines stress in a very unconventional way, but it relates very well to the job of police work. Stress is “that feeling and desire along with the ensuing bodily effects, experienced by a person who has a strong and true longing to choke the living shit out of someone who desperately deserves it, but you can’t (Goldfarb, 2011).” It is Goldfarbs’ contention that although this might be a very funny way to convey the information, however, there is a real truth to it. Law enforcement work calls for an incredible amount of discipline and restraint. This restraint is a continuing thing and it causes insurmountable stress. Goldfarb points out that between 1934 and 1960 police suicide rates were half that of the general population and between 1980 and the present have almost doubled (Goldfarb, 2011). So the difference in the present vs. the past is, “You can’t choke em anymore,” as he puts it. He contends that street justice no longer exists, the media is continually showing the negative side of police work, and politicians cater to the public and new laws, therefore, your hands are tied. So, law enforcement officers start to feel like they are being choked. According to research the biggest stresses for police work are, 1. Taking a life in the line ...Download file to see next pagesRead More
Share:
Tags
Cite this document
(“Stress in Law Enforcement Results in a High Degree of Divorce and Research Paper”, n.d.)
Stress in Law Enforcement Results in a High Degree of Divorce and Research Paper. Retrieved from https://studentshare.org/law/1432052-stress-in-law-enforcement-results-in-a-high-degree
(Stress in Law Enforcement Results in a High Degree of Divorce and Research Paper)
Stress in Law Enforcement Results in a High Degree of Divorce and Research Paper. https://studentshare.org/law/1432052-stress-in-law-enforcement-results-in-a-high-degree.
“Stress in Law Enforcement Results in a High Degree of Divorce and Research Paper”, n.d. https://studentshare.org/law/1432052-stress-in-law-enforcement-results-in-a-high-degree.
Comments (1)
Click to create a comment or rate a document

xz
xzavier84 added comment 1 year ago
Student rated this paper as
At first, I thought 7 of pages is too much for such a subject. But now I see it could not be done better. As the author starts you see the complexity of the subject. I’ve read all at once. Precise sample

New and complex issues have arisen which demanded fresh understanding and handling of cases involved them. This has resulted in the enhanced development of specialized laws e.g. cyber laws and interpretation of those laws. The same is true with Media Laws. Media has developed much in the last half-century. As it evolved as a profession and more people started to join it, there arose the levels of money involved in it. With this grew the contractual obligations on the parts of parties and concerned laws e.g. patent laws, privacy laws, and copyrights laws, etc. also started to play their parts. With these issues, the role of law in the media industry also reached a new height.
Mathew Fisher, the appellant, joined a band with Mr...
6 Pages(1500 words)Assignment
sponsored ads
Save Your Time for More Important Things
Let us write or edit the research paper on your topic "Stress in Law Enforcement Results in a High Degree of Divorce and Suicide" with a personal 20% discount.
GRAB THE BEST PAPER

Let us find you another Research Paper on topic Stress in Law Enforcement Results in a High Degree of Divorce and Suicide for FREE!