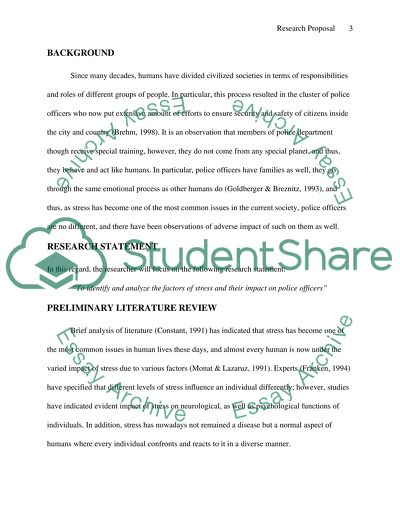 Download file to see previous pages In particular, police officers have families as well, they go through the same emotional process as other humans do (Goldberger & Breznitz, 1993), and thus, as stress has become one of the most common issues in the current society, police officers are no different, and there have been observations of adverse impact of such on them as well. RESEARCH STATEMENT In this regard, the researcher will focus on the following research statement: “To identify and analyze the factors of stress and their impact on police officers” PRELIMINARY LITERATURE REVIEW Brief analysis of literature (Constant, 1991) has indicated that stress has become one of the most common issues in human lives these days, and almost every human is now under the varied impact of stress due to various factors (Monat & Lazaruz, 1991). Experts (Franken, 1994) have specified that different levels of stress influence an individual differently; however, studies have indicated evident impact of stress on neurological, as well as psychological functions of individuals. In addition, stress has nowadays not remained a disease but a normal aspect of humans where every individual confronts and reacts to it in a diverse manner. Literature review has identified the Biopsychosocial Model of Stress (Bernard & Krupat, 1994) that has been very imperative in understanding different aspects of stress, and thus, it will be a part of this preliminary literature review. According to this model, stress exists with its three components: “an external component, an internal component, and the interrelationship between the external and the internal components” (Bernard & Krupat, 1994). Advocates of this model believe that diverse environmental events begins the waves of stress; however, these waves when come in contact with internal component causes a reaction in human body, and the then interrelationship causes different stress levels and diverse impact in individuals (Cannon, 1932). In 1967, psychiatrists from the University of Washington (Holmes & Rahe, 1967) carried out a study to inquire about the impact of stress on causation of illnesses in humans. For this purpose, approximately five thousand patients participated in the study that enabled the researchers to come to forty-three causes of stress (Holmes & Rahe, 1967). However, experts now believe that the causes have jumped up to more than forty-three due to stressful lives of humans in today’s society. When it comes to law enforcement officers, undoubtedly, they face stressful situations more than any other professionals do due to the very nature of a police officer’s job. It has been observations that law enforcement officers although perform duties according to a schedule like other professions. However, unlike other professions, police officers cannot keep their work aside from their daily routines, and a horde of responsibilities always follows police officers at their homes as well that is one of the major causes of higher stress levels in law enforcement officers. One of the major reasons behind higher stress levels is that by becoming a law enforcement officer, the individual not only put his own life in danger but also of his family members and friends that has so far been the most common factors of huge stress levels in ...Download file to see next pagesRead More
Share:
Tags
Cite this document
(“Stress and Law Enforcement Research Proposal Example | Topics and Well Written Essays - 1500 words”, n.d.)
Retrieved from https://studentshare.org/law/1431681-stress-and-law-enforcement
(Stress and Law Enforcement Research Proposal Example | Topics and Well Written Essays - 1500 Words)
https://studentshare.org/law/1431681-stress-and-law-enforcement.
“Stress and Law Enforcement Research Proposal Example | Topics and Well Written Essays - 1500 Words”, n.d. https://studentshare.org/law/1431681-stress-and-law-enforcement.
Comments (0)
Click to create a comment or rate a document

CHECK THESE SAMPLES OF Stress and Law Enforcement

New and complex issues have arisen which demanded fresh understanding and handling of cases involved them. This has resulted in the enhanced development of specialized laws e.g. cyber laws and interpretation of those laws. The same is true with Media Laws. Media has developed much in the last half-century. As it evolved as a profession and more people started to join it, there arose the levels of money involved in it. With this grew the contractual obligations on the parts of parties and concerned laws e.g. patent laws, privacy laws, and copyrights laws, etc. also started to play their parts. With these issues, the role of law in the media industry also reached a new height.
Mathew Fisher, the appellant, joined a band with Mr...
6 Pages(1500 words)Assignment
sponsored ads
Save Your Time for More Important Things
Let us write or edit the research proposal on your topic "Stress and Law Enforcement" with a personal 20% discount.
GRAB THE BEST PAPER

Let us find you another Research Proposal on topic Stress and Law Enforcement for FREE!