Comments (0)
Add to wishlistDelete from wishlist
Cite this document
Summary
LAW Name i) The name of the court is Belgian Conseil d'Etat, the administrative supreme court in Belgium. (ii) The President during these proceedings was G.C. Rodriguez Iglesias (iii) The Court of Justice construed that the first question required a determination of whether Articles 5 and 189 of the EEC Treaty prevented the Member State so that they could not approve measures which were contrary to Directive 91/156 during the time which had been given for its transposition…
Download full paperFile format: .doc, available for editing
HIDE THIS PAPERGRAB THE BEST PAPER93.4% of users find it useful 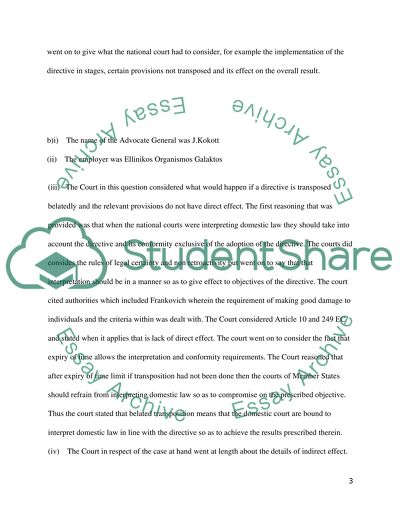 Extract of sample "Questions on Law"

Download file to see previous pages The Court reasoned that there was a binding obligation on the Member State to take measure so as to achieve the desired result in the directive and this was clearly stipulated within Article 189 of the Treaty. Furthermore, the duty was on all authorities which included courts of the Member States. The Court also relied upon Article 191 and stated that directives had legal effect from the time of notification to the Member State. As for directive 91/156 the court stated that the time provided was to allow Member States to take measures to achieve the prescribed result. The Court cited that according to Article 5, Article 189 and the directive measures which would seriously compromise upon the prescribed result should be refrained from. The Court finally went on to give what the national court had to consider, for example the implementation of the directive in stages, certain provisions not transposed and its effect on the overall result. b)i) The name of the Advocate General was J.Kokott (ii) The employer was Ellinikos Organismos Galaktos  (iii) The Court in this question considered what would happen if a directive is transposed belatedly and the relevant provisions do not have direct effect. The first reasoning that was provided was that when the national courts were interpreting domestic law they should take into account the directive and its conformity exclusive of the adoption of the directive. The courts did consides the rules of legal certainty and non retroactivity but went on to say that that interpretation should be in a manner so as to give effect to objectives of the directive. The court cited authorities which included Frankovich wherein the requirement of making good damage to individuals and the criteria within was dealt with. The Court considered Article 10 and 249 EC and stated when it applies that is lack of direct effect. The court went on to consider the fact that expiry of time allows the interpretation and conformity requirements. The Court reasoned that after expiry of time limit if transposition had not been done then the courts of Member States should refrain from interpreting domestic law so as to compromise on the prescribed objective. Thus the court stated that belated transposition means that the domestic court are bound to interpret domestic law in line with the directive so as to achieve the results prescribed therein. (iv) The Court in respect of the case at hand went at length about the details of indirect effect. Furthermore the conditions of non retroactivity and legal certainty were also discussed. The important aspect in respect of this case was the fact that even though in indirect effect there has been the long standing phenomena that case that came under its head were where the time limit for bringing such an action had passed, in the case it was stated that the national courts were under a duty to take into account of the directive even when the time for the directive had not passed and the time limit had not expired. Thus the courts took a new approach in respect of indirect effect whereupon the courts of the member states have been placed under and obligation to interpret ...Download file to see next pagesRead More
Share:
Tags
Cite this document
(“Questions on Law Essay Example | Topics and Well Written Essays - 1250 words”, n.d.)
Retrieved from https://studentshare.org/law/1428061-etma04
(Questions on Law Essay Example | Topics and Well Written Essays - 1250 Words)
https://studentshare.org/law/1428061-etma04.
“Questions on Law Essay Example | Topics and Well Written Essays - 1250 Words”, n.d. https://studentshare.org/law/1428061-etma04.
Comments (0)
Click to create a comment or rate a document

CHECK THESE SAMPLES OF Questions on Law

New and complex issues have arisen which demanded fresh understanding and handling of cases involved them. This has resulted in the enhanced development of specialized laws e.g. cyber laws and interpretation of those laws. The same is true with Media Laws. Media has developed much in the last half-century. As it evolved as a profession and more people started to join it, there arose the levels of money involved in it. With this grew the contractual obligations on the parts of parties and concerned laws e.g. patent laws, privacy laws, and copyrights laws, etc. also started to play their parts. With these issues, the role of law in the media industry also reached a new height.
Mathew Fisher, the appellant, joined a band with Mr...
6 Pages(1500 words)Assignment
sponsored ads
Save Your Time for More Important Things
Let us write or edit the essay on your topic "Questions on Law" with a personal 20% discount.
GRAB THE BEST PAPER

Let us find you another Essay on topic Questions on Law for FREE!