Comments (0)
Add to wishlist Delete from wishlist
Cite this document
Summary
The freedom of movement is one of the four freedoms guaranteed by the European Union to EU citizens. To workers granted freedom of movement, the EC treaty is unequivocally clear that “such freedom of movement shall entail the abolition of any discrimination based on nationality between workers of the Member States”…
Download full paper File format: .doc, available for editing
HIDE THIS PAPERGRAB THE BEST PAPER92.1% of users find it useful 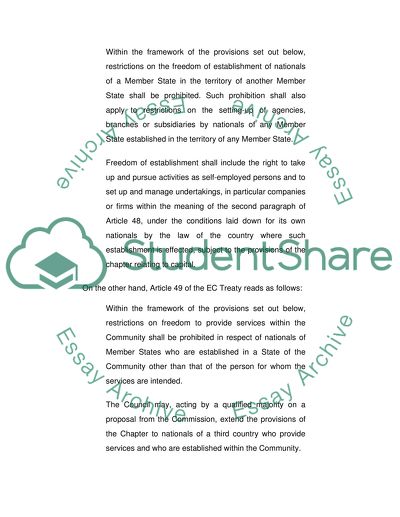 CHECK THESE SAMPLES OF Questions on Eu Law

In th...
8 Pages (2000 words) Case Study
sponsored ads
Save Your Time for More Important Things
Let us write or edit the essay on your topic "Questions on Eu Law" with a personal 20% discount.
GRAB THE BEST PAPER

Let us find you another Essay on topic Questions on Eu Law for FREE!