Comments (0)
Add to wishlistDelete from wishlist
Cite this document
Summary
Agency theory is entirely an academic term and it defines the relation and conflicts between a principal and an agent. With the help of corporate governance any corporation and company can be managed and governed…
Download full paperFile format: .doc, available for editing
HIDE THIS PAPERGRAB THE BEST PAPER96.8% of users find it useful 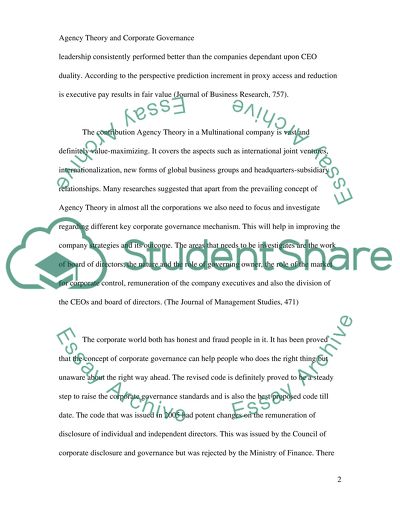 Download file to see previous pages This interaction between the shareholders, committee members and the board of directors are help in order to improve the performance of the company. In 1997, Malaysian corporate governance mechanism was strengthened and reformed and resulted in the establishment of the Malaysian Code on Corporate Governance (MCCG) in 2000. The impact of this study was unsatisfactory and the failures of almost 176 Malaysian companies persisted from 2004 to 2006 (Journal of American Academy of Business, Cambridge, 125). Corporate Governance also affects the cash flow or cash holdings in companies. Businesses which possess a complex nature should consider the needs and financial requirements of the firms. There are several firms who totally rely upon CEO duality. Studies revealed, that the corporations, who are under the category of independent leadership consistently performed better than the companies dependant upon CEO duality. According to the perspective prediction increment in proxy access and reduction is executive pay results in fair value (Journal of Business Research, 757). The contribution Agency Theory in a Multinational company is vast and definitely value-maximizing. It covers the aspects such as international joint ventures, internationalization, new forms of global business groups and headquarters-subsidiary relationships. Many researches suggested that apart from the prevailing concept of Agency Theory in almost all the corporations we also need to focus and investigate regarding different key corporate governance mechanism. This will help in improving the company strategies and its outcome. The areas that needs to be investigates are the work of board of directors, the nature and the role of governing owner, the role of the market for corporate control, remuneration of the company executives and also the division of the CEOs and board of directors. (The Journal of Management Studies, 471) The corporate world both has honest and fraud people in it. It has been proved that the concept of corporate governance can help people who does the right thing but unaware about the right way ahead. The revised code is definitely proved to be a steady step to raise the corporate governance standards and is also the best proposed code till date. The code that was issued in 2005 had potent changes on the remuneration of disclosure of individual and independent directors. This was issued by the Council of corporate disclosure and governance but was rejected by the Ministry of Finance. There were few recommendations and it affected many companies. The proposal was: 50% of the board consisted board members where the CEO and the chairman is the same person; the chairman and the CEO are family relatives; the chairman is not an independent director or owner of the corporation and last but not least, both the chairman and the CEO should be a part of the company (The Business Times by Mak Yuen Teen). Critique and analysis: Insolvency is a very important aspect of Law or any company and there are many case laws on this particular aspect. Usually, a managed investment or a trust is described as insolvent but under the Corporation Act 2001 (CTH), a person cannot be called insolvent in such cases. The analysis of the viable purposes of this act needs to be performed by the trustee of the company or firm. The director or the owner as well as the creditors face problems when the trustee is insolvent as it leads to lack of guidance. In the Corporation Act 2001, it clearly states that a director of a firm needs to restrict any kind of insolvent trading or business deals by the company. A company is notified as an Insolvent company when it not only ...Download file to see next pagesRead More
Share:
Tags
Cite this document
(“Agency Theory and Corporate Governance Essay Example | Topics and Well Written Essays - 2000 words”, n.d.)
Retrieved from https://studentshare.org/law/1425448-critican-analysing
(Agency Theory and Corporate Governance Essay Example | Topics and Well Written Essays - 2000 Words)
https://studentshare.org/law/1425448-critican-analysing.
“Agency Theory and Corporate Governance Essay Example | Topics and Well Written Essays - 2000 Words”, n.d. https://studentshare.org/law/1425448-critican-analysing.
Comments (0)
Click to create a comment or rate a document

CHECK THESE SAMPLES OF Agency Theory and Corporate Governance

...Management Theory and Practice in the early childhood education industry This Report applies management theory into practice in the early childhood industry, especially in the context of women leaders. Management issues play a significant role in the academic sector, because early childhood professionals need higher levels of motivation in order to avoid burnout . As pointed out in a study by Osgood and Halsall (2007) where they carried out research to examine the position of women in leadership or management positions, a “glass ceiling” exists for women in the academic setting, which could significantly impair motivation. Since many of the individuals employed in the early education sector are women, addressing this issue is even more...
6 Pages(1500 words)Coursework
sponsored ads
Save Your Time for More Important Things
Let us write or edit the essay on your topic "Agency Theory and Corporate Governance" with a personal 20% discount.
GRAB THE BEST PAPER

Let us find you another Essay on topic Agency Theory and Corporate Governance for FREE!