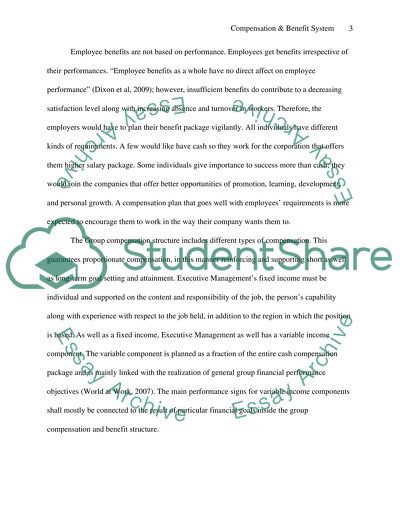 Download file to see previous pages With the passage of time, more workers are comparing one business to another not just with respect to salary but also benefits. A number of individuals, indeed, are more concerned about the benefits they get instead of wages because of family requirements or aspects of their standard of living, such as “health care coverage and financial planning” (World at Work, 2007). If someone has a company, his employee compensation and benefits package may simply be the basis someone does or does not agree to the job offer. To make the company aggressive and create a center of attention for very skilled applicants, one has to present an attractive benefits package. The business should make this a significant element of the planning process, if the management would like to appoint and retain top workers. In the present day, employees are not ready to work merely for the money; they look forward to something more than cash. This ‘something more than cash’ is known as employee benefits or fringe benefits. Employee benefits are non-monetary type of compensation provided besides cash earnings to improve employees’ lives - both personal and professional.
Employee benefits are not based on performance. Employees get benefits irrespective of their performances. “Employee benefits as a whole have no direct affect on employee performance” (Dixon et al, 2009); however, insufficient benefits do contribute to a decreasing satisfaction level along with increasing absence and turnover in workers. Therefore, the employers would have to plan their benefit package vigilantly. All individuals have different kinds of requirements. A few would like have cash so they work for the corporation that offers them higher salary package. Some individuals give importance to success more than cash; they would join the companies that offer better opportunities of promotion, learning, development, and personal growth. A compensation plan that goes well with employees’ requirements is more expected to encourage them to work in the way their company wants them to. The Group compensation structure includes different types of compensation. This guarantees proportionate compensation, in this manner reinforcing and supporting short as well as long-term goal setting and attainment. Executive Management’s fixed income must be individual and supported on the content and responsibility of the job, the person’s capability along with experience with respect to the job held, in addition to the region in which the position is based. As well as a fixed income, Executive Management as well has a variable income componen ...Download file to see next pagesRead More
Share:
Tags
Cite this document
(“Compensation and Benefit System Essay Example | Topics and Well Written Essays - 1750 words”, n.d.)
Retrieved from https://studentshare.org/law/1424684-compensation-and-benefit-system

CHECK THESE SAMPLES OF Compensation and Benefit System

In order to compare the welfare system of the three proposed countries, it is important to first develop a comparative method that would guide in comparing the three states. For the purpose of this paper, a binary comparison would be conducted. The implicit comparison would deal with Britain while the explicit comparison would explore the USA and Canada. Thereby a small N’ study would be used, that is, of three countries.
The three countries selected to share a similarity in the form that these countries are a welfare state. This is when welfare is mainly funded by the state. While the USA and Canada focus on the liberal welfare state, the welfare state of the UK is not quite defined.
The comparison of the welfare...
8 Pages(2000 words)Term Paper
sponsored ads
Save Your Time for More Important Things
Let us write or edit the essay on your topic "Compensation and Benefit System" with a personal 20% discount.
GRAB THE BEST PAPER

Let us find you another Essay on topic Compensation and Benefit System for FREE!