Comments (0)
Add to wishlistDelete from wishlist
Cite this document
Summary
Environmental laws are founded on policies. In the modern era there are a number of possible policies that influence lawmakers. The main policies are sustainable development, the avoidance of eminent environmental collapse, developing a new society through environmentalism and animal liberation. …
Download full paperFile format: .doc, available for editing
HIDE THIS PAPERGRAB THE BEST PAPER94% of users find it useful 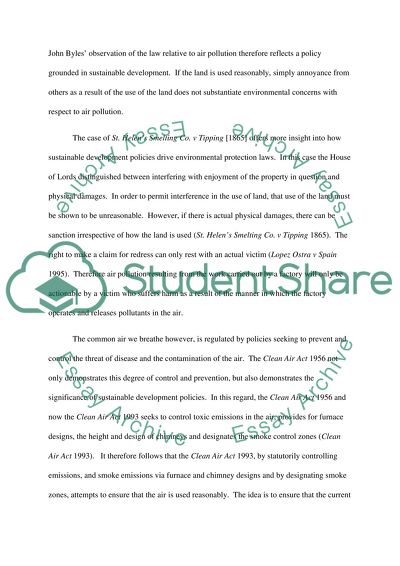 Download file to see previous pages The degree to which each or any of these policies will shape the law will depend on the extent of environmental damages in a particular area. Even so, sustainable development appears to be the most common policy driver among nation states with respect to environmental laws. Sustainable development not only responds to current needs, but also seeks to ensure that the needs of subsequent generations are not compromised in the process (UK Government 2010). There are a number of policies within the main sustainable development policy for protecting the environment against the incidents of air and water pollution. With respect to air pollution, sustainable development begins with national regulation of industrial conduct, this is tempered by reference to local controls of smoke, smog and nuisance as well as international controls that seek to safeguard against damages to the global climate. Cumulatively, these policies take into account the competing interests of the right to enjoyment of one’s property and the welfare and interests of society as a whole. In other words protection of the environment against air pollution must take into account that the owner of land has the right to enjoy the use of it. As Sir John Byles stated in Hole v Barlow [1858], the law permits the “reasonable use of a lawful trade in a convenient and proper place” (Hole v Barlow 1858). This right does not end simply because an individual might “suffer annoyance from its being carried on” (Hole v Barlow 1858). Sir John Byles’ observation of the law relative to air pollution therefore reflects a policy grounded in sustainable development. If the land is used reasonably, simply annoyance from others as a result of the use of the land does not substantiate environmental concerns with respect to air pollution. The case of St. Helen’s Smelting Co. v Tipping [1865] offers more insight into how sustainable development policies drive environmental protection laws. In this case the House of Lords distinguished between interfering with enjoyment of the property in question and physical damages. In order to permit interference in the use of land, that use of the land must be shown to be unreasonable. However, if there is actual physical damages, there can be sanction irrespective of how the land is used (St. Helen’s Smelting Co. v Tipping 1865). The right to make a claim for redress can only rest with an actual victim (Lopez Ostra v Spain 1995). Therefore air pollution resulting from the work carried out by a factory will only be actionable by a victim who suffers harm as a result of the manner in which the factory operates and releases pollutants in the air. The common air we breathe however, is regulated by policies seeking to prevent and control the threat of disease and the contamination of the air. The Clean Air Act 1956 not only demonstrates this degree of control and prevention, but also demonstrates the significance of sustainable development policies. In this regard, the Clean Air Act 1956 and now the Clean Air Act 1993 seeks to control toxic emissions in the air, provides for furnace designs, the height and design of chimneys and designates the smoke control zones (Clean Air Act 1993). It therefore follows that the Clean Air Act 1993, by statutorily controlling emissions, and smoke emissions via furnace and chimney designs and by designating smoke zones, attempts to ensure that the air is used reasonably. The idea is to ensure that the current needs are met without compromising the needs of future generations under the auspices of sustainable development policies. Other statutory provisions designed to meet current needs and ...Download file to see next pagesRead More
Share:
Tags
Cite this document
(“Environmental Policies Essay Example | Topics and Well Written Essays - 1500 words”, n.d.)
Retrieved from https://studentshare.org/law/1407539-essay-about-environment-law
(Environmental Policies Essay Example | Topics and Well Written Essays - 1500 Words)
https://studentshare.org/law/1407539-essay-about-environment-law.
“Environmental Policies Essay Example | Topics and Well Written Essays - 1500 Words”, n.d. https://studentshare.org/law/1407539-essay-about-environment-law.
Comments (0)
Click to create a comment or rate a document

CHECK THESE SAMPLES OF Environmental Policies

Ozarks technical college became amongst the first to see the smoke free policy implementation in 2003, and in accordance with a certain analyst, who assisted in drafting the initiative in this school, there was light feedback from the learners. The policy is easily implemented by not forcing the learners to quit the tendency. For one to be successful in implementing this kind of initiative there should be minimal opposition. The smoking prevalence decreased to 18.9% up from 24.4%in adults with the age of 18-24 from the year 2005 to the year 2011, in accordance with a research Centre (CDC). The age group is now among the ones with the lowest prevalence in smoking of age below 65. It was 6 years back; the group was highest in the sm...
6 Pages(1500 words)Term Paper
sponsored ads
Save Your Time for More Important Things
Let us write or edit the essay on your topic "Environmental Policies" with a personal 20% discount.
GRAB THE BEST PAPER

Let us find you another Essay on topic Environmental Policies for FREE!