Comments (0)
Add to wishlist Delete from wishlist
Cite this document
Summary
Contract law is made up of certain rules that are set to govern the connection, substance and legitimacy of a formal agreement between two or more parties- which may include individuals or organizations-…
Download full paper File format: .doc, available for editing
HIDE THIS PAPERGRAB THE BEST PAPER91.5% of users find it useful 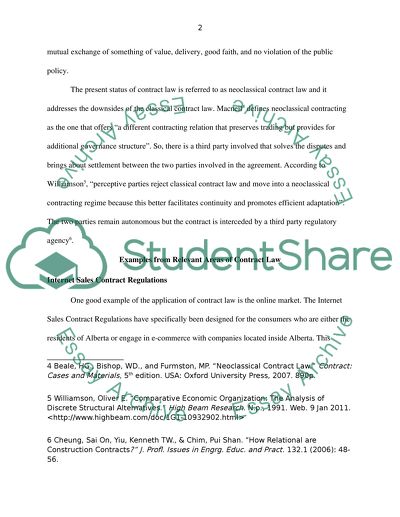 Download file to see previous pages Contract law is made up of certain rules that are set to govern the connection, substance and legitimacy of a formal agreement between two or more parties- which may include individuals or organizations- for the purpose of selling of goods or services, or exchange of business interests12. Contract law is applicable to these and many other business activities between multiple parties who want to enter into a valid agreement or contract for the accomplishment of their business objectives. This agreement contains such rules that are also recognized by the law which means that if one party is offended when the other party breaks the rule, then the former party has all rights to submit petition in the court of law against the later party and can sue it. Before signing the agreement, the two parties may want to hold pre-emptive discussions or negotiations. These discussions are not part of the contract but only a preliminary exchange of views. For example, if a bookstore is displaying books with price tags on its shelves, then before the contract between the seller and the buyer is formalized, the seller may go into bargain and bring the seller down to a lower price. Once the price is confirmed, the buyer then pas the price and enters into a contract. The contract law, on one hand, tends to protect the law from breaking and on the other, defines terms and conditions when a dispute occurs. According to Larson3, a contract must involve mutual consent of the two parties, offer and acceptance, mutual exchange of something of value, delivery, good faith, and no violation of the public policy. The present status of contract law is referred to as neoclassical contract law and it addresses the downsides of the classical contract law. Macneil4 defines neoclassical contracting as the one that offers “a different contracting relation that preserves trading but provides for additional governance structure”. So, there is a third party involved that solves the disputes and brings about settlement between the two parties involved in the agreement. According to Williamson5, “perceptive parties reject classical contract law and move into a neoclassical contracting regime because this better facilitates continuity and promotes efficient adaptation”. The two parties remain autonomous but the contract is interceded by a third party regulatory agency6. Examples from Relevant Areas of Contract Law Internet Sales Contract Regulations One good example of the application of contract law is the online market. The Internet Sales Contract Regulations have specifically been designed for the consumers who are either the residents of Alberta or engage in e-commerce with companies located inside Alberta. This contract deals with only those goods and services which are worth more than $50 bought or sold for personal use. The regulation deals with formal business transactions within companies and not with a single individual. There are certain disclosure statements stated in the regulations that instruct the online vendor or seller to provide certain information to the consumer before making the transaction. This information is very vital for the consumer’s satisfaction so that he knows that he is entering into a safe and protected contract with the company and that there is no chance of any fraudulent activity. This information is to be printed on the website. The company is liable to provide the consumer with a copy of the contract made either in the electronic form or in paper, according to the consumer’s requirement. Consumer Protection Legislation The EU’s contract law, referred to as consumer protection legislation, consists of several Acts that ensure the protection of consumer guaranteed from the seller’s side. These Acts include Fair Trading Act 1973 (ensures fair e-commerce), Supply of Goods (Implied Terms) Act 1973 (deals with hire-purchase contracts), Sale of Goods Act 1979 (describes the rights of the seller), Supply of Goods and Services Act 1982 (describes the ...Download file to see next pages Read More
Share:
Tags
Cite this document
(“Contract law and neoclassical contract law Essay”, n.d.)
Retrieved from https://studentshare.org/law/1404948-contract-law-and-neoclassical-contract-law

CHECK THESE SAMPLES OF Contract law and neoclassical contract law

In th...
8 Pages (2000 words) Case Study
sponsored ads
Save Your Time for More Important Things
Let us write or edit the essay on your topic "Contract law and neoclassical contract law" with a personal 20% discount.
GRAB THE BEST PAPER

Let us find you another Essay on topic Contract law and neoclassical contract law for FREE!