Comments (0)
Add to wishlist Delete from wishlist
Cite this document
Summary
Contract Law: Scenario Analysis (Name) (Institution) (Subject) (Tutor) (Date) According to Gordley, a contract is a legal accord between two or more parties where each of the parties commits to discharge a specific duty or duties for the other party according the agreement.1 He further states the agreement comes into existence when one party issue a tender and anybody willing to be bound by the conditions stated in the contract to its can agree to its terms long as they meet its requirements…
Download full paper File format: .doc, available for editing
HIDE THIS PAPERGRAB THE BEST PAPER96.8% of users find it useful 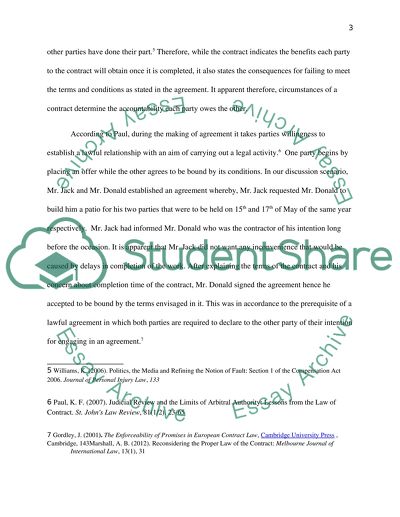 Download file to see previous pages According to Marshall, the terms of the agreement may either be stated expressly where the parties to the contract have included those terms in the agreement, or they may by implied in case the parties have not stated them in their agreement, but they are provided by the general law.4 Enforcing the terms of the contract ensures both parties gain from the execution of the agreement sated in the contract, and that no person or party to the contract takes advantage of the other by failing to discharge their obligations after the other parties have done their part.5 Therefore, while the contract indicates the benefits each party to the contract will obtain once it is completed, it also states the consequences for failing to meet the terms and conditions as stated in the agreement. It apparent therefore, circumstances of a contract determine the accountability each party owes the other. According to Paul, during the making of agreement it takes parties willingness to establish a lawful relationship with an aim of carrying out a legal activity.6 One party begins by placing an offer while the other agrees to be bound by its conditions. In our discussion scenario, Mr. Jack and Mr. Donald established an agreement whereby, Mr. Jack requested Mr. Donald to build him a patio for his two parties that were to be held on 15th and 17th of May of the same year respectively. Mr. Jack had informed Mr. Donald who was the contractor of his intention long before the occasion. It is apparent that Mr. Jack did not want any inconvenience that would be caused by delays in completion of the work. After explaining the terms of the contract and his concern about completion time of the contract, Mr. Donald signed the agreement hence he accepted to be bound by the terms envisaged in it. This was in accordance to the prerequisite of a lawful agreement in which both parties are required to declare to the other party of their intention for engaging in an agreement.7 According to Marshall, a legal agreement should have commencement date and concluding date.8 According to the agreement signed by the parties, the work was supposed to begin on fifteenth of March until 15th of April the same year. Although Mr. Jack was worried that the work would not be completed in one month due to possibility for interferences from of the weather, Mr. Donald assured him that he would take care of that by involving more workers to shorten the period required for completing the work. Since the agreement between these parties is that service and materials, Mr. Jack had no option, but to rely on the expertise of the contractor.9 Therefore, Mr. Jack had fulfilled a very crucial part of his obligation by informing the other party of his plan and expectations. A lawful agreement also requires each party to provide consideration as a commitment for their obligations of the executing the contract requirement.10 In this case, Mr. Jack had given ?5000 as stipulated in the agreement signed by the parties. This implied that Mr. Jack had shown his commitment to the contract as the law requires. On the ...Download file to see next pages Read More
Share:
Tags
Cite this document
(“Contract law: scenario analysis Essay Example | Topics and Well Written Essays - 2500 words”, n.d.)
Retrieved from https://studentshare.org/law/1404224-contract-law-essay

In th...
8 Pages (2000 words) Case Study
sponsored ads
Save Your Time for More Important Things
Let us write or edit the essay on your topic "Contract law: scenario analysis" with a personal 20% discount.
GRAB THE BEST PAPER

Let us find you another Essay on topic Contract law: scenario analysis for FREE!