Comments (0)
Add to wishlistDelete from wishlist
Cite this document
Summary
This paper “Possessory rights of mortgagees” seeks to discuss the possessory rights of mortgagees with a specific focus on describing these privileges. It also seeks to elucidate remedies other than possession, which are available against defaulting borrower…
Download full paperFile format: .doc, available for editing
HIDE THIS PAPERGRAB THE BEST PAPER98.8% of users find it useful 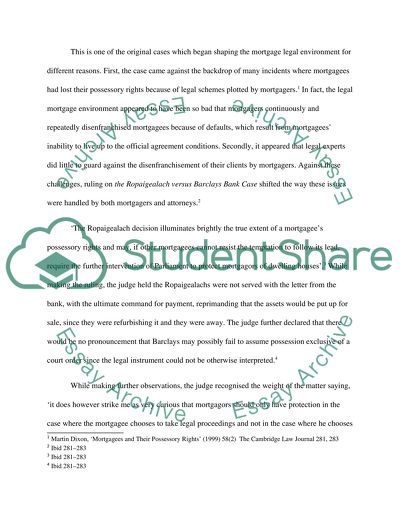 Download file to see previous pages This is one of the original cases which began shaping the mortgage legal environment for different reasons. First, the case came against the backdrop of many incidents where mortgagees had lost their possessory rights because of legal schemes plotted by mortgagers.  In fact, the legal mortgage environment appeared to have been so bad that mortgagers continuously and repeatedly disenfranchised mortgagees because of defaults, which result from mortgagees’ inability to live up to the official agreement conditions. Secondly, it appeared that legal experts did little to guard against the disenfranchisement of their clients by mortgagers. Against these challenges, ruling on the Ropaigealach versus Barclays Bank Case shifted the way these issues were handled by both mortgagers and attorneys.
‘The Ropaigealach decision illuminates brightly the true extent of a mortgagee’s possessory rights and may, if other mortgagees cannot resist the temptation to follow its lead, require the further intervention of Parliament to protect mortgagors of dwelling houses’.  While making the ruling, the judge held the Ropaigealachs were not served with the letter from the bank, with the ultimate command for payment, reprimanding that the assets would be put up for sale, since they were refurbishing it and they were away. The judge further declared that there would be no pronouncement that Barclays may possibly fail to assume possession exclusive of a court order since the legal instrument could not be otherwise interpreted.  4
While making further observations, the judge recognised the weight of the matter saying, ‘it does however strike me as very curious that mortgagors should only have protection in the case where the mortgagee chooses to take legal proceedings and not in the case where he chooses simply to enter the property’.5 The good judge admitted persuasion to the matter indicating that it was not feasible to conclude that Parliament had intentions to cover up such important cases. Through this case, the possessory rights of the mortgagees were restored by stopping Barclays Bank from selling the property in order to recover their defaulted payments.
Description of the Possessory Rights of Mortgagees
It is notable that the most efficient strategies mortgagees use to get back their security when a mortgagor defaults include sale of mortgaged property. This is only tenable when the mortgagee has the possessory rights to ensure listing of the assets in the marketplace as a vacant premise.6 This frequently takes place when the mortgagor has already vacated the premise to allow for selling of the asset. The mortgagee will, therefore, exercise the possessory ...Download file to see next pagesRead More
Share:
Tags
Cite this document
(“Possessory rights of mortgagees Essay Example | Topics and Well Written Essays - 2250 words”, n.d.)
Retrieved from https://studentshare.org/law/1404033-possessory-rights-of-mortgagees

CHECK THESE SAMPLES OF Possessory rights of mortgagees

The first problem suffered by women in present-day Iran is the conditions imposed upon them by Iran’s governing body, consisting of a hierarchy of fundamentalist Islamic clerics who ensure that the country functions under a patriarchal system that keeps women covered and quiet. How is it that in the name of the Prophet Muhammad, whose first convert to Islam was his wife, Khadija, who served alongside him during a time, according to authors Lakeland and Mernissi (1991), “. . . when the Prophet could be a lover and a leader hostile to all hierarchies, when women had their place as unquestioned partners in a revolution that made the mosque an open place, the household a temple of debate (11),” Iranian Islamic cleric...
7 Pages(1750 words)Report

The primary Human Rights document in the United Kingdom is the Human...
11 Pages(2750 words)Term Paper

Under the English criminal law, several past and current legislations were made in order to protect the children from corporal punishment or becoming a victim of physical abuse. Despite our effort to prevent parents from using physical force in disciplining their children, the British Government remains unconvinced that the law which protects the children from physical punishment is sufficient (Keating, 2008). Physical punishment such as ‘smacking’, ‘slapping’, ‘kicking’, or ‘spanking’ is referring to the act of causing a degree of pain or discomfort to the child. (Niland, 2009, p. 6) With regard to the legal issues behind child protection against physical abuse, this study aims to d...
6 Pages(1500 words)Coursework
sponsored ads
Save Your Time for More Important Things
Let us write or edit the essay on your topic "Possessory rights of mortgagees" with a personal 20% discount.
GRAB THE BEST PAPER

Let us find you another Essay on topic Possessory rights of mortgagees for FREE!