Comments (0)
Add to wishlist Delete from wishlist
Cite this document
Summary
Reparation and Evidence Law Paper Word Count: 3,477 Introduction This document examines a case in a relation to Susan, an management consultant employed by the firm K2 Management Services (K2MS). In a project with ISH-BETH, Susan works off site. At ISH-BETH's premises, Susan encounters an accident because ISH-BETH was undertaking a repair work…
Download full paper File format: .doc, available for editing
HIDE THIS PAPERGRAB THE BEST PAPER95% of users find it useful 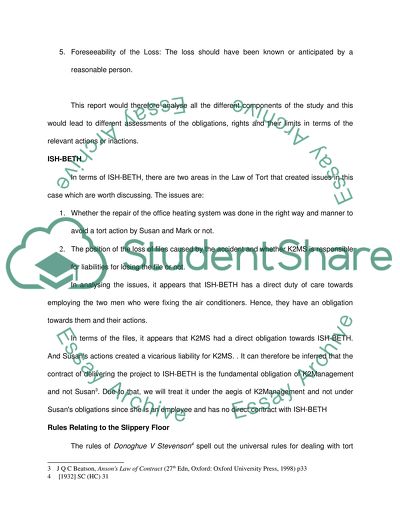 Download file to see previous pages Broad Legal Context The law of tort revolves around the need for people to be responsible for their actions and ensure that their actions do not affect people negatively. The law of tort is steeped in the concept of good neighbourliness which requires people to be more careful about the implications of their actions to other people in the wider society1. There are five main components of the law of tort which gives rise to a tort and are important in determining the outcome of civil proceedings to tort cases2: 1. Recoverable loss: There must be some damage, injury or loss that can be valued and recovered. 2. Duty of care: The aggrieved party must have had some duty of care from the accused person. 3. Breach of Duty: The duty of care must be disregarded 4. Loss or Damage: The disregard of the duty of care and the loss must have led to some degree of loss or damage. 5. Foreseeability of the Loss: The loss should have been known or anticipated by a reasonable person. This report would therefore analyse all the different components of the study and this would lead to different assessments of the obligations, rights and their limits in terms of the relevant actions or inactions. ISH-BETH In terms of ISH-BETH, there are two areas in the Law of Tort that created issues in this case which are worth discussing. The issues are: 1. Whether the repair of the office heating system was done in the right way and manner to avoid a tort action by Susan and Mark or not. 2. The position of the loss of files caused by the accident and whether K2MS is responsible for liabilities for losing the file or not. In analysing the issues, it appears that ISH-BETH has a direct duty of care towards employing the two men who were fixing the air conditioners. Hence, they have an obligation towards them and their actions. In terms of the files, it appears that K2MS had a direct obligation towards ISH-BETH. And Susan's actions created a vicarious liability for K2MS. . It can therefore be inferred that the contract of delivering the project to ISH-BETH is the fundamental obligation of K2Management and not Susan3. Due to that, we will treat it under the aegis of K2Management and not under Susan's obligations since she is an employee and has no direct contract with ISH-BETH Rules Relating to the Slippery Floor The rules of Donoghue V Stevenson4 spell out the universal rules for dealing with tort and this indicates that the impact of a person's actions have an effect on his neighbours and due to this, there is the need for a duty of care to be placed on on persons to promote responsible behaviour. This means that there is the need for some standard of care to be imposed where there is a foreseeable damage or injury. Failure to do so will mean that the affected person can bring an action for negligence on the part of the perpetrator. In a workplace, the employer has certain obligations which imposes an inherent duty of care on the employer who controls the premises. First of all, the employer has a Common Law duty to ensure the safety of employees on his premises. The Health and Safety Act 1974 requires employers to meet some standard measures in the workplace to ensure that the the place is safe for all workers. The employee will have to balance the foreseeability of risk against the ...Download file to see next pages Read More
Share:
Tags
Cite this document
(“Reparation law and evidence Coursework Example | Topics and Well Written Essays - 3500 words”, n.d.)
Reparation law and evidence Coursework Example | Topics and Well Written Essays - 3500 words. Retrieved from https://studentshare.org/law/1403399-reparation-law-and-evidence

CHECK THESE SAMPLES OF Reparation law and evidence

In th...
8 Pages (2000 words) Case Study
sponsored ads
Save Your Time for More Important Things
Let us write or edit the coursework on your topic "Reparation law and evidence" with a personal 20% discount.
GRAB THE BEST PAPER

Let us find you another Coursework on topic Reparation law and evidence for FREE!