Comments (0)
Add to wishlist Delete from wishlist
Cite this document
Summary
Claim Laws Name: Professor: Institution: Course: Date: Claim Laws Abstract Legal claims from a plaintiff to a defendant concerning a dispute follow several procedures and are diverse in nature. They can range from money claims to compensation claims.1 Many instances incorporate the law of tort, which acts to assist claimants and victims of wrongdoing from other individuals or defendants…
Download full paper File format: .doc, available for editing
HIDE THIS PAPERGRAB THE BEST PAPER98.3% of users find it useful 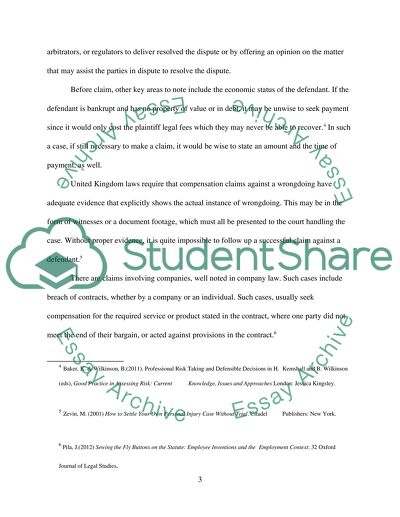 Download file to see previous pages Introduction When a claimant seeks compensation to harm incurred from a situation or individual, the most desirable means of settling the dispute would be by incorporation of alternative dispute resolution tactics without necessarily going to a court trial.3 Such techniques may include use of arbitrators, or regulators to deliver resolved the dispute or by offering an opinion on the matter that may assist the parties in dispute to resolve the dispute. Before claim, other key areas to note include the economic status of the defendant. If the defendant is bankrupt and has no property of value or in debt, it may be unwise to seek payment since it would only cost the plaintiff legal fees which they may never be able to recover.4 In such a case, if still necessary to make a claim, it would be wise to state an amount and the time of payment, as well. United Kingdom laws require that compensation claims against a wrongdoing have adequate evidence that explicitly shows the actual instance of wrongdoing. This may be in the form of witnesses or a document footage, which must all be presented to the court handling the case. Without proper evidence, it is quite impossible to follow up a successful claim against a defendant.5 There are claims involving companies, well noted in company law. Such cases include breach of contracts, whether by a company or an individual. Such cases, usually seek compensation for the required service or product stated in the contract, where one party did not meet the end of their bargain, or acted against provisions in the contract.6 Cheryl acquires injuries on her face, after being hit by a pedal from Lizzie’s bike after it was run over by Donnas’ car to the point that she could not see through her right eye. She cannot be able drive for at least a week. This inconveniences her from attending a concert, hence losing money used to purchase tickets to that concert. Cheryl earns her living as a model, and because of the injuries incurred, she cannot attend an audition as well as a photo shoot for an advert for a company. Cheryl has several claims that she could be able to pursue in the case of her situation. The UK law provides that she can make a whiplash personal injury claim. She could direct the claim to either Lizzie, the bike’s owner, to Donna, who smashed Lizzie’s bike and finally to Donald, the car owner who initially hit Lizzie. The claim against Lizzie would have a basis on the aspect that Lizzie did not wait for the lights to turn green before she started crossing the road, and in the event, she is at the centre of an accident involving Lizzie and Donald’s car. The basis on such a claim would be that Lizzie was careless and that she did not follow traffic regulations that require her to wait until the lights are green before she crosses the road. She could use either Donald or Donna as her witnesses since both of them were present at the time of the accident.7 Donald would be a better witness, since he would also be trying to ward of blame on hitting Lizzie. He would, therefore, make a strong support for Cheryl’s claim against Lizzie. Towards Donna, Cheryl can make a personal injury claim based on the aspect that she was the one who runs over Lizzie’s bike, and in the event, a pedal comes off, only to hit Cheryl on the face.8 ...Download file to see next pages Read More
Share:
Tags
Cite this document
(“Reparation Law & Evidence Assignment Example | Topics and Well Written Essays - 2500 words”, n.d.)
Retrieved from https://studentshare.org/law/1393054-reparation-law-evidence

In th...
8 Pages (2000 words) Case Study
sponsored ads
Save Your Time for More Important Things
Let us write or edit the assignment on your topic "Reparation Law & Evidence" with a personal 20% discount.
GRAB THE BEST PAPER

Let us find you another Assignment on topic Reparation Law & Evidence for FREE!