Comments (0)
Add to wishlistDelete from wishlist
Cite this document
Summary
European Union law (Name) (Institution) (Course) (Tutor) (Date) Rights of residence and rights associated with free movement The directive is planning to do away with the obstacles that hinder the free movement of persons and give an opportunity to any European citizen to reside in a country other than their own.1 This specific council directive 90/364/EEC, which is on the rights of residence, only focuses on the nationalities that are European and leaves the others out…
Download full paperFile format: .doc, available for editing
HIDE THIS PAPERGRAB THE BEST PAPER94.3% of users find it useful 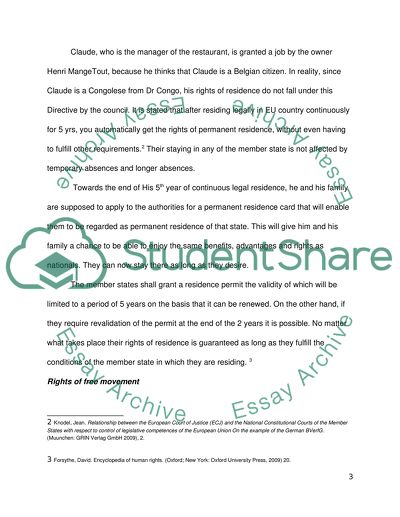 Download file to see previous pages Rights of residence Member states will issue the right of residence to nationals of the member states who are not enjoying other provisions of the community law which has been provided that they themselves and the their family members are covered by medical insurance in respect of all the risks in the host member state and have sufficient resources, which will be able to sustain them and avoid being a burden to the social security system of the host member state during their period of residence. All the citizens of the union have the right to enter another member state by only possessing a valid passport or an identity card. Under no circumstance will they require an entry or exit visa. Claude, who is the manager of the restaurant, is granted a job by the owner Henri MangeTout, because he thinks that Claude is a Belgian citizen. In reality, since Claude is a Congolese from Dr Congo, his rights of residence do not fall under this Directive by the council. It is stated that after residing legally in EU country continuously for 5 yrs, you automatically get the rights of permanent residence, without even having to fulfill other requirements.2 Their staying in any of the member state is not affected by temporary absences and longer absences. Towards the end of His 5th year of continuous legal residence, he and his family are supposed to apply to the authorities for a permanent residence card that will enable them to be regarded as permanent residence of that state. This will give him and his family a chance to be able to enjoy the same benefits, advantages and rights as nationals. They can now stay there as long as they desire. The member states shall grant a residence permit the validity of which will be limited to a period of 5 years on the basis that it can be renewed. On the other hand, if they require revalidation of the permit at the end of the 2 years it is possible. No matter what takes place their rights of residence is guaranteed as long as they fulfill the conditions of the member state in which they are residing. 3 Rights of free movement Claude and his family have the opportunity not to be deported, if they take the right legal moves to make sure every detail pertaining their dwelling is settled well by the London government. They have to make sure they follow up their rights of becoming citizens automatically after staying in United Kingdom for a period of 5 years, which is taken by the legislation as a substantial length of time for an individual to be well conversant with the system of that country. By doing this, they will be exercising their rights of residence within that state, which has been laid down by the member states of the European Union.4 Their son Patrice who is also a Congolese, but was born in Belgium, which has made him now to have the Belgium nationality, has also the right to reside in United Kingdom. His stay in the United Kingdom for a period of 5 years since 2007 together with his family is part of the council directive that shall facilitate him to become a citizen automatically. Also, it is stated that, if your partner or any of the relative has been authorized by the state to live with you as family members, they also get the opportunity to automatically get the right s of permanent residen ...Download file to see next pagesRead More
Share:
Tags
Cite this document
(“EU LAW Essay Example | Topics and Well Written Essays - 2500 words”, n.d.)
EU LAW Essay Example | Topics and Well Written Essays - 2500 words. Retrieved from https://studentshare.org/law/1402702-eu-law
(EU LAW Essay Example | Topics and Well Written Essays - 2500 Words)
EU LAW Essay Example | Topics and Well Written Essays - 2500 Words. https://studentshare.org/law/1402702-eu-law.
“EU LAW Essay Example | Topics and Well Written Essays - 2500 Words”, n.d. https://studentshare.org/law/1402702-eu-law.
Comments (0)
Click to create a comment or rate a document

CHECK THESE SAMPLES OF EU LAW

In th...
8 Pages(2000 words)Case Study
sponsored ads
Save Your Time for More Important Things
Let us write or edit the essay on your topic "EU LAW" with a personal 20% discount.
GRAB THE BEST PAPER

Let us find you another Essay on topic EU LAW for FREE!